The winner of eight Tony Awards, including Best Musical, Best Actor, and Best Book, Once is a story of a Dublin street musician who’s about to give up on his dream when a beautiful young woman takes a sudden interest in his haunting love songs. As their chemistry grows, his music soars to powerful new heights…but their unlikely connection turns out to be deeper and more complex than your everyday romance.

Ryan Link portrays the emcee and understudies the lead, Guy (both the male and female roles are unnamed: Guy and Girl, respectively). He has been touring with Once since September 2013 and he somehow found time to release his new four-song EP, Reverberations, in March 2015. 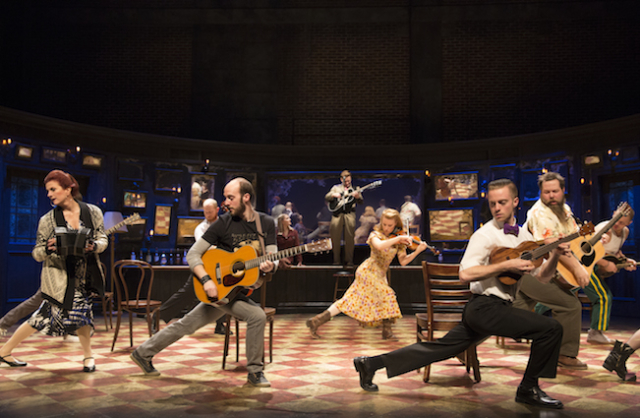 The cast of Once
Photo by Joan Marcus

I’ve been told the story of Once imitates your own life, can you tell me more about that?
Ryan Link: It’s true, I was once a girl from the Czech Republic who emigrated to Ireland in search of a “Hoover repair,” so to speak?.

I grew up playing music in Seattle in the ’90s, and I dare say there was no better time and place to spend adolescence. I was exposed to all kinds of local grunge-rock offshoots, but also jam bands and neo-soul. Then I moved to Boston to study a bit at Berklee but dropped out to join another band. When that ran its course, I caught a pretty virulent strain of “the acting bug”, and moved to NYC in 2001 to start auditioning for things.

One of the major themes in Once is what “stops” both Guy and Girl from going after what they want are the things they can’t let go of. I was never quite happy abandoning the musician’s life for thespian endeavors. Though it created new challenges and a skill set I wanted to master, I missed the feeling of being in a band, and it was something I kept coming back to in fits and starts between theater jobs. Still, I was somewhat “stopped”, a blocked songwriter with sporadic bursts of creativity and long periods of dissatisfaction in between. I’d released things with bands but never had a record deal. Never stuck it out long enough.

Playing on the Once tour — recounting this bittersweet hero’s journey eight times a week — lit a fire under my lazy ass. It motivated me to put out my first solo effort, the four-song EP I released this spring titled Reverberations.

So yeah, especially when I go on as Guy, this story hits pretty close to home.

Is the music of Once similar to your own music at all? What challenges are there to perform music so different or similar to your own?
RL: The music of Once is a bit folksier, I’d say, although I had no idea what kind of rock ‘n’ roll emotion could be conveyed vocally with just an acoustic guitar until I heard Glen sing “Say It To Me Now” in the opening scene of the Once movie. I’ve dabbled in louder, dancier, trippier genres of music but have now settled on kind of an alt-country thing which is much more aligned with the music from Once. So all roads are converging. I’m actually pretty set on heading to Nashville after this tour.

The cast of Once
Photo by Joan Marcus

You’ve been on tour with Once since 2013. How do you keep from getting bored with the role and keep performances fresh? Has your interpretation of your character changed over time?
RL: What a long, fantastic trip it’s been. Emcee has gotten a little cheekier over time, I suppose (especially the stuff that happens off-mic). But mostly it’s a challenge to stay in the moment and listen to what’s going on in front of you even if you’ve heard it 600 times. We do a fair amount of sitting on the side of the stage, which is actually lovely, but there’s a certain amount of drifting off after so many shows, but I’d like to think I’m good at “meditating” and staying just alert enough not to miss a cue. The pre-show helps to keep things fresh. It’s a different selection of Irish and Czech folksongs every night so we can vary tempos and play around a bit with each other. One of the songs I sing in the pre-show sometimes is “Home Boys Home”, which is way fun to take at a super-fast punk rock speed.

I’ve gotten to play the Guy role about thirty times now, so it’s still fresh and different every time it happens.  Deeper, hopefully. It’s a dream role for any singer-songwriter type for sure.

How do audiences react to being able to get on stage and interact with the bar set that serves as an actual bar? Definitely not typical.
RL: There’s usually a bit of astonishment when we first come out on stage and squeeze through the crowd to get to our instruments while they’re all standing around — “Oh!  This is so fun!” — while people try to wave from the stage to their friends who stayed back in their seats. Some will ask us directly if we’re part of the cast or where we’re from, but we try to minimize the interaction and make it about the music. Occasionally folks start clapping along, and there have been actual attempts at jig dancing. Photos and video technically aren’t allowed, so it’s always entertaining to watch the stage managers put the kibosh on people pulling out their phones. Oh, the conversations they have on headset. Crowd control is a hilarious exploit.

What else would audience goers be surprised to learn about this show?
RL: We are actually playing our instruments; all of them. Some audience members doubt that, despite the visibility of our hands on strings and keys in every mirror surrounding the stage.

Once runs at the State Theatre through June 28. For more information and to purchase tickets, head to www.hennepintheatretrust.org.