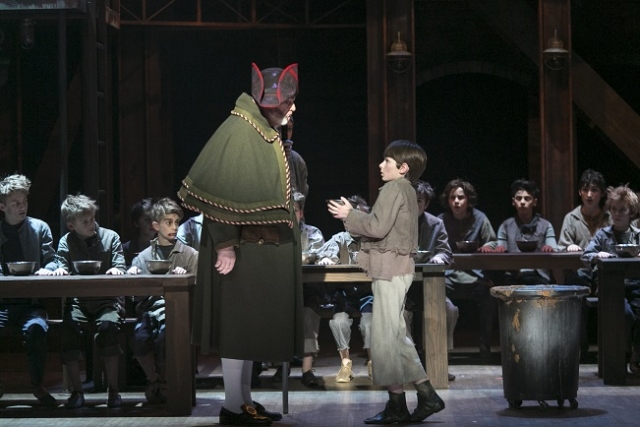 Broadway Re-Imagined returns with Oliver!, the extraordinary tale with a twist. Nationally acclaimed director Peter Rothstein stages the Tony Award®-winning musical in an all-new collaboration between Theater Latté Da and Hennepin Theatre Trust, based on the Charles Dickens’ story of Oliver Twist. This re-imagining brings to life vivid characters including the Artful Dodger, Fagin and, of course, the young orphan Oliver. Oliver’s quest to find a home and family takes us on a heart-wrenching and heart-warming musical journey.

To aid in that journey is the co-costume design by Alice Fredrickson, who is originally from Oklahoma City and made her way to the Twin Cities after graduating from Knox College. Her recent credits include Brand for Commonweal Theatre, Next to Normal for Weathervane Theater, Unrav­eled for Theater Unbound, and Independence at Theatre in the Round, as well as designs for productions in Chicago and New Hampshire. She currently works as a Costume Design Assistant at the Guthrie, where she most recently worked on The Cocktail Hour and A Steady Rain. 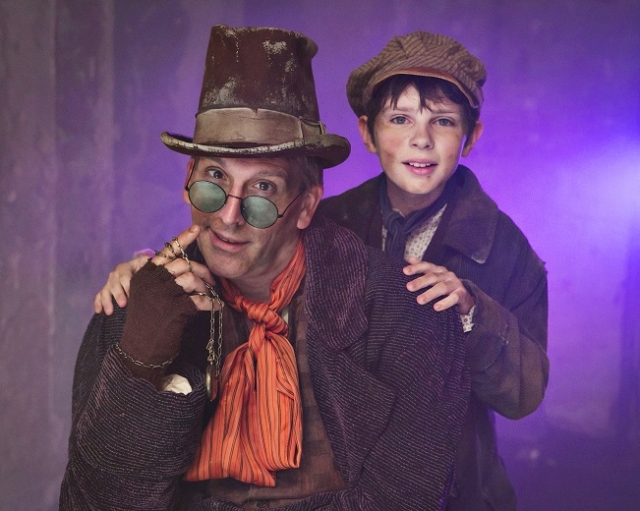 Tell me a little about steampunk in general and why that speaks to you. Why go the steampunk route when reimagining Oliver?
Alice Fredrickson: Steampunk is history re-imagined; it visually mixes the style of Victorian England and the fantasy of steam-powered machinery. There are a lot of gadgets, metallics, and leather interwoven with Victorian Era fashion: silhouettes, bustles and high-collared bodices. It’s irreverent. There are no rules, no guidelines, and the visual mix of history and fantasy is very exciting to work with as a costume designer. But however exciting, it also has to serve the story, which in this case is Dickens’ gritty fairy tale, Oliver!

Why go the steampunk route when reimagining Oliver?
AF: As I researched, I read about how steampunk enthusiasts choose their character and how they dress themselves: was their character a scientist? An explorer? A vagabond? High class? Low class? Each needs a different look, a different steampunk accessory. It’s the same way I think about costuming a show. In his story, Dickens makes these character specifications clear. There are clear distinctions between class: Oliver and the workhouse orphans vs. the wealthy Brownlow house, the vagabonds in Fagin and Dodger’s world and the aristocrats of Victorian London. Using the steampunk visual aesthetic gave us the opportunity to tell Dickens’ story and make these important distinctions through a blending of the old and the new in a way that would delight a modern audience. There’s an exclamation point in the title, and steampunk gave us the opportunity to let the costumes play right into that. 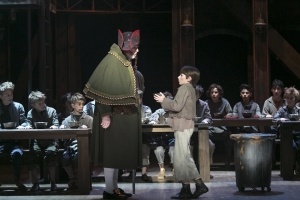 How does this translate into fashion seen in the show?
AF: For me, there were so many images of steampunk costumes that I loved and wanted to capture onstage, but I had to constantly ask myself if it would enhance the story. (That is the dance of a designer.) These are real characters and their costumes needed to reflect their personality and status, so we decided to translate the fashion on a spectrum. The most traditional Victorian fashion is being worn by the upper class of society — ivories and white with Victorian bustles, and silhouettes — and the more industrial fashions are worn by the bohemians of Fagin and Dodger’s world with jewel tones, gadgets, and leather. Bohemians and artists are often the people commenting on the upper classes, while at the same time wanting to imitate them, which again plays into that mix of history and irreverence.

Steampunk is a rather recent term and trend. How does that mix with the Victorian era seen in Oliver? Does it look different for adults versus the members of the Minnesota Boychoir? Why or why not make that distinction?
AF: You always want to make distinctions between the worlds of the story. The Boychoir, in the workhouse, is in a place where there is little happiness and light, and they have little access to the outside world or money to be part of the ‘gadget’ society. So they skew toward more traditional Victorian, with torn and graying clothes. Where we did push was with their hair and make-up. My wonderful Wig and Make-up Designer, Paul Bigot, cut many of the boys’ hair in skewed mohawks and designed make-up to make their faces look pale and their eyes tired. That’s where we captured that irreverence. And the Boychoir had a lot of fun with it!

Oliver! runs at the Pantages Theatre through March 1. For more information and to purchase tickets, head to www.hennepintheatretrust.org.