It began as one man’s story, became everyone’s music, and is now Broadway’s musical. Motown The Musical is the true American dream story of Motown founder Berry Gordy’s journey from featherweight boxer to the heavyweight music mogul who launched the careers of Diana Ross, Michael Jackson, Smokey Robinson and many more. Motown shattered barriers, shaped the lives of a generation (and beyond!), and has influenced some of the most prolific entertainers of today. Now, experience it live on stage in the record-breaking smash hit Motown The Musical, written by Gordy himself!

Patrice Covington has graced the Orpheum stage before, notably in the touring cast of Dreamgirls, and returns again in the role of Martha Reeves with the cast of Motown. The musical spans the decades, evoking the images of hope and determination of the 50s right through to the riots and protests of the 60s and 70s (images which viewers can’t help but draw parallels with recent protests). Now a Grammy nominated singer, Covington’s star is shining brighter than ever and took the time to answer some questions. 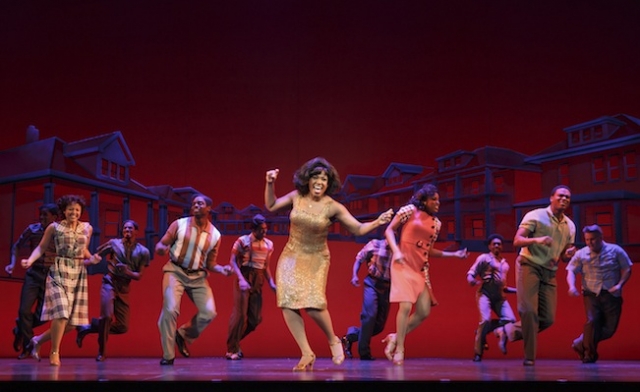 Patrice Covington as Martha Reeves (center) performs “Dancing In The Streets” with the cast of Motown The Musical.
Photo by Joan Marcus

What goes into capturing the essence of your iconic, real-life characters compared to fictional characters in other shows?
PC: Performing is my whole soul and life! I don’t know how to do anything else as well as I do performing. It’s my chance to give back and share my blessing, to brighten a day, touch a life, and tell a story that may evoke someone else to be something great! Thankfully we live in a generation where YouTube holds the answers to so much! I watched clips of Martha Reeves’ performances to capture her body language and style. My other character, Edna Anderson (Gordy’s assistant), is alive and very well. I talk to her to check in with my Southern/West Virginia accent that she has. And the amazing and iconic Berry Gordy gave us an extremely wonderful opportunity to talk to him about EVERYTHING we need to know!

Tell us about your turn in Motown The Musical: What does it mean to you?
PC: Being a part of Motown is life changing. It’s made me and my beautifully talented cast of dreamers a part of history. We are now a part of the Motown Family and History.

Do you have a favorite scene, or a difficult aspect?
PC: My favorite moment is actually when I sing “Dancing In The Streets.” It’s the one number that I feel screams BROADWAY! There are singers, dancers, set pieces moving, quick changes, great lights, and GLITTER! So much fun! Sometimes when we sing “What’s Going On” by Marvin Gaye it really hits that this song isn’t out of date. It unfortunately still means the same as it meant when it was recorded. It’s hard. But we hope it inspires the audience members to make a change happen.

Who are some of your favorite Motown artists?
PC: I love the Jackson 5 and Micheal Jackson of course! The Temptations…especially Temptation Christmas music!

Who has inspired you as a singer, actress, and performer?
PC: My favorite singer of all time is Whitney Houston, like many 80’s baby singers. She was THE VOICE and she was everything. I always tried to copy her! Not many singers can take it from recording to acting so flawlessly. I wish she had an opportunity to take the Broadway stage in her lifetime. It would have been epic. I still love her and in my head she was my Auntie.

Motown The Musical will appear at the Orpheum Theatre through December 28. For more information and to purchase tickets, head to www.hennepintheatretrust.org.