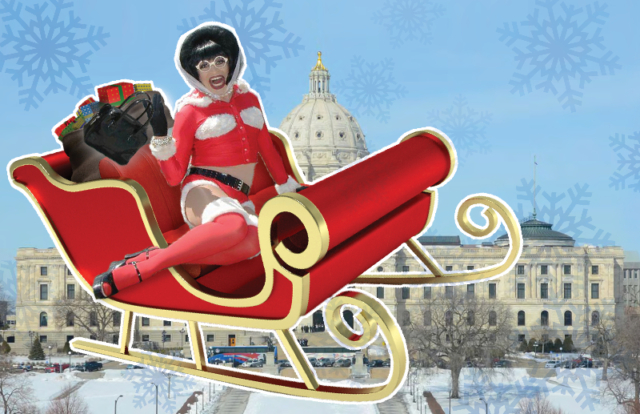 Miss Richfield 1981 is running for governor in her all new show, From the Trailer House to the State House — Santa Style! For the new edition of her annual holiday show, Miss R will prove why she’ll be Minnesota’s best commander-in-chiffon, laying out her platform in side-splitting songs, very funny videos, and getting the audience involved in the movement: #BigHairMatters.

Miss Richfield 1981 first took to the stage in February 1996, and began performing at Twin Cities’ bars and benefits, leading to her being recognized as one of the Twin Cities’ most creative artists and runner-up for “Artist of the Year” by the Minneapolis Star Tribune. She has performed annually on Illusion’s stage since 1996 and performs each summer in Provincetown, Massachusetts, as well as taking her show throughout the country to cabarets and theaters, private and corporate functions, and Atlantis Events cruises and resort vacations.

You’ve done a holiday show for almost two decades. After traveling a lot of the year, what keeps you coming back to the Twin Cities every year to do a show for the holidays?
Miss Richfield: The Twin Cities is my home, my family, my roots! I love being here anytime of year. But there truly is nothing better than being home for the holidays. My dear mother is in a care center these days, so I try to be home as much as possible. And the Illusion generously offers to house my show each year in December. I am a blessed lady!

How do you come up with a new holiday show every year? Where does the inspiration come from?
MR: I just try to imagine what I would like to see. For example, you’re probably aware that we had a bit of politics on the radar for the last year or so, and I thought everyone would love a light-hearted look at this rather serious subject. And it worked out well to laugh and tease about the election, as well as leave a gentle reminder to vote! My new show for 2017 is entitled, 2020 Vision which is a look at surviving the new world by creating your own reality! That is something a lot of us will be doing over the next four years until we vote again in 2020.

In a world increasingly going more toward PC culture, and even some comedians staying away from certain topics, you never shy away from an over-the-top brand of comedy that hits on just about everyone. Why is that?
MR: Well, for starters, I always use a helpful and positive tone! And I am a believer in the dynamite approach: aim broad to get everything and everybody. That way, no one feels left out. And it generally makes everyone a little bit uncomfortable, which makes me a little bit happy!

What can you tell me about this new show and running for governor?
MR: Well, my presidential bid didn’t work out quite like I’d planned. So I guess I’ll take the next best thing. I’m sure it doesn’t pay as well, but I think I have a better chance at this one. I don’t own a department store, but I have shopped at the Hub on 66th and Nicollet for most of my life!

It seems like everyone has seen you perform, but in case there is someone out there that hasn’t, what would you say to entice them to see the show?
MR: I am so grateful for my dear fans who’ve provided such support over the years. And to those who may have taken a break, I’d encourage them to see this one! Let’s face it, many of us were disappointed with the election results. So come and relax and laugh at a very light-hearted look at politics, which is the way I feel serious subjects should always be discussed!

From the Trailer House to the State House — Santa Style! runs at the Illusion Theater Dec. 2–17. For more information and to purchase tickets, head to www.illusiontheater.org.