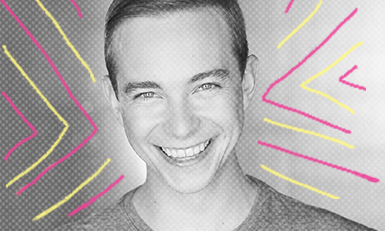 Nearly anyone you talk to will recognize the superbly quotable Mean Girls. Now, the hit Broadway musical based on the 2004 film makes its debut in Minneapolis at Hennepin Theatre Trust’s Orpheum Theatre. For the few people who aren’t familiar with the pop culture phenomenon, Mean Girls opens with Cady Heron’s introduction to a suburban high school after being home schooled on the African savanna. She falls prey to the antics of the popular girls (a clique known as the Plastics), which is when she devises a plan to end Regina George’s reign as the leader of the pack.

Eric Huffman steps into the iconic role of Damian Hubbard, one of the most beloved characters from the original movie. As one half of the duo that genuinely welcomed Cady to her new school, Damian witnesses Cady’s entire journey from “new kid” to “queen bee”.

The feminist message of sisterhood and the strength of women supporting each other can get lost for some people in the setting of high school cliques, but these themes are described as being so much more prevalent in the musical versus the movie. Can you tell me about how the musical version addresses some of these highly timely issues?
Eric Huffman: Great question! On the surface level, I think musicals are an excellent vehicle to discuss complicated issues. Allowing a character or group of characters to sing about their inner emotions gives a musical the opportunity to dig deeper into its subject matter. We don’t always get the chance to say out loud what we’re thinking, and a song does just that. It’s entertaining, but it’s also an excellent tool.

Specifically talking about Mean Girls, Tina [Fey, the original creative force behind the film and now the musical] and the writing team have had 15 years to sit with the material. They’ve seen it garner a cult following, and they’ve seen what speaks to people. Now they can take a fresh pass at the material and weave those 15 years of perspective into the story.

The biggest gift of all is that society has changed with this new generation. The feminist movement and sentiments have been around for decades, but there’s something special about this younger generation. They’re breaking through in amazing ways. Female empowerment has never had a stronger following. Mean Girls is about many different things, and female empowerment is definitely one of them. It’s the perfect material to bring into a new generation that is ready to hear its message.

The story may be set in a high school, but Mean Girls has fans of all ages and genders. What about the story and the show is so enduring, even so long after the film’s release?
EH: I love that Mean Girls has the ability to cross many different ages and even genders. It is clearly about a specific age range of girls, but the story and the characters transcend that world. It’s a cliche phrase, but it’s absolutely true that Mean Girls has something in it for everybody. And I don’t mean that lightly. We all know Tina is a genius, and she made every effort to make sure that she covered all of the bases.

Mean Girls is based on a self-help book titled Queen Bees and Wannabes by Rosalind Wiseman. It’s actually a really interesting read, and I can see why Tina realized that within a non-fiction self-help book there existed a beautiful story. Toward the beginning of the book, Wiseman lists her top 10 or 15 archetypes of teenage girls. Not only that, she details how they relate to one another, and how they might manipulate each other for power. If you look at Mean Girls, every one of these archetypes is represented in some way. And Tina even took the advice of Wiseman in how they should interact.

That being said, these archetypes are larger than just teenage girls. They exist in every age group and demographic. The way they express themselves may be different, but the categories are still true. That’s my long way of saying, yes, everyone who sees this show will find a character that they relate to intimately. And every character is given its due. Once you find that character that you connect to, you are going to feel something when that character goes through his or her transformation. It’s powerful writing. 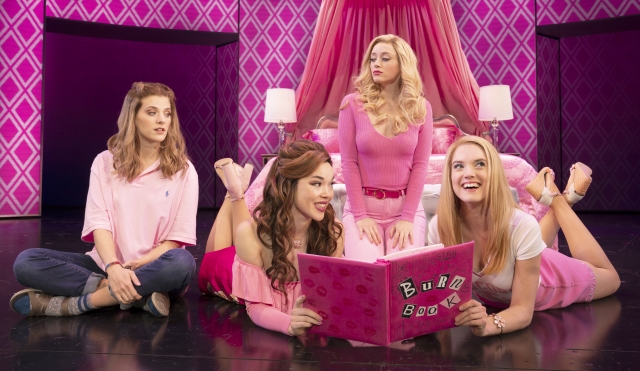 Cady and The Plastics.
Photo by Joan Marcus

What other differences will audiences who are long-time fans of the movie notice (aside from becoming a musical, of course)?
EH: I think the most obvious difference between the musical and the movie is that the musical is set in modern day, not 2004. With all that that entails. Social media is actually a big influence in the musical. They don’t shy away from characters communicating through texts or Instagram. The brilliant set of LED-screens by Scott Pask allows someone’s cell phone screen to pop up 15 feet tall for the audience to see. It’s an amazingly effective tool.But don’t worry—all of the classic fan favorite lines are there, in some form. Some of them are exactly the same, and a few have some delightful surprises. And there’s a handful of new ones to take away from this show as well.

How has it been stepping into a role that was made so famous on film 15 years ago? Do the same jokes and characteristics of Damian that landed in 2004 when the film was release transfer well to 2019? Or did you notice some updates?
EH: Stepping into Damian’s shoes was daunting. I grew up watching this movie religiously. I’m not kidding, I could quote all of his lines by heart, and I did. Often. More often than I care to admit. This version of Damian is a little bit different, of course. Scenes have been re-structured, lines have been cut or edited. And I think all of those changes were for the benefit of this version of Mean Girls. They brought these characters smoothly into 2019.

What do you hope audiences take away from Damian, as one of the few openly gay characters in mainstream Broadway?
EH: I cannot stress how important Damian was to my young teenage self when this movie was first released. Here was an openly gay character in a mainstream film, and his sexuality had nothing to do with the plot. It was just a character trait, like being tall or being blonde. Almost all other entertainment media that featured homosexuality made that the crux of the material, the center of the plot. They’re great stories, but it gets tiring. It’s almost more powerful to just see someone who is gay as just another normal kid in high school. That empowered me so much more than any other gay media at that time.

That is what drives my entire performance in Mean Girls. Damian is just there to be a good friend and to do the right thing. And he happens to be gay. I’m not pigeonholed into playing homosexual stereotypes. I’m just genuinely allowed to play myself. It almost makes me tear up just thinking about how rare that is for our community. And what a gift it is. Can you tell I love this show?

Mean Girls runs at the Orpheum Theatre through Oct. 13. For more information and to purchase tickets, head to www.hennepintheatretrust.org.