From the Italian master who wrote Madame Butterfly and Turandot comes a romantic portrait of America’s iconic Golden West. Puccini’s gorgeous melodies and blazing orchestral colors are set against the backdrop of a gold-mining frontier town, where a poker-playing, pistol-wielding saloon owner finds herself in a love triangle with a handsome outlaw and the sheriff who is in hot pursuit of him.

Based on the play The Girl of the Golden West by the American author David Belasco, the opera has fewer of the show-stopping highlights that are characteristic of other Puccini works, but is admired for its impressive orchestration and for a score that is more melodically integrated than is typical of his previous work. Claire Rutter, in the lead role of Minnie for the Minnesota Opera, answers 5 questions. 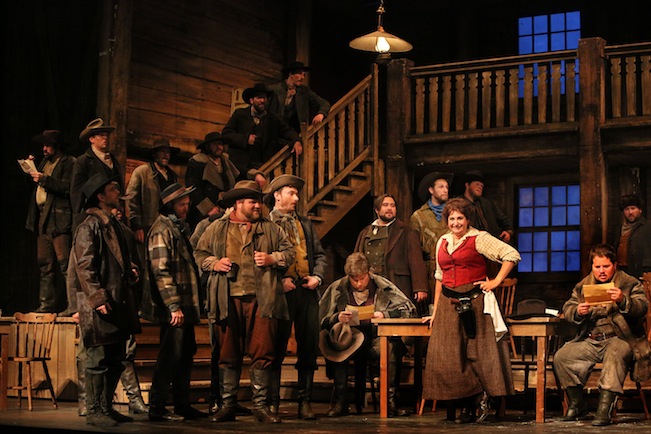 The role of Minnie is often heralded as a strong, female character among a cast of men. What is it like playing out her dynamic, and love-stricken storyline as one of two females in quite a large cast of men?
Being amongst all these guys holds no fears for me personally! The character of Tosca is the same—the only girl amongst all these guys… Also, I was brought up in a family of all boys, so I guess I’m used to it! I never thought that fighting with my brothers would prepare me so well for a career in opera!

Audiences will find that the roles of “hero” and “villain” are a little blurred in this Puccini opera. Do you think that adds a certain something extra to the story? Or what do you make of these blurred lines?
Normally the tenor is the hero, yet in this case Dick Johnson is a bandit who turns his back on his old life for the love of Minnie, so isn’t really a hero at any point—and then the Sheriff, Jack Rance, who’s really a good guy, looks as if he’s become the villain, but isn’t really that either. So, yes blurred lines indeed. It gets the audience thinking, and us as artists it makes portraying those characters all the more interesting. It’s easy to portray the Sheriff as a villain, but he’s simply in love with Minnie and can’t bear for the tenor to have her! I think we should all feel sorry for Rance at the end, which our production does! In some productions you feel no sympathy for him, and that’s wrong.

Being that this opera doesn’t follow the traditional trajectory of Puccini’s more famous operas (the lack of traditional arias, for example, or the somewhat happier ending), what would you tell audiences to prepare them for La Fanciulla del West?
It’s almost like a musical, in that it’s all about story-telling and short bursts of good tunes. It’s very fluid and the music describes exactly what’s happening in the action on stage. I’m a little disappointed that Puccini didn’t write more arias, but it’s such a good acting role that I forgive Puccini for that! 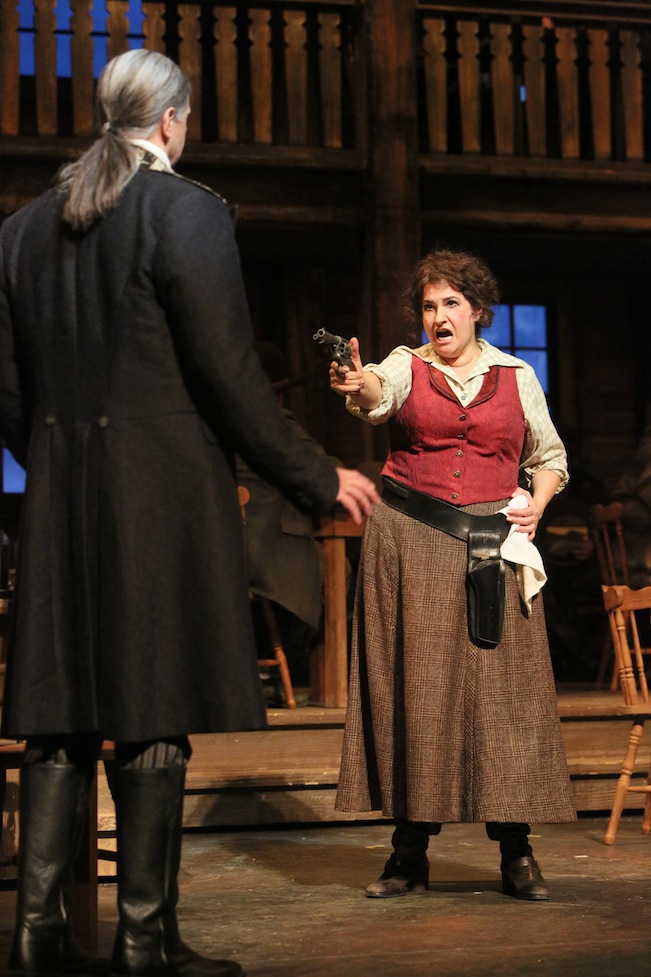 As an English soprano, how does it feel to make your debut as Minnie, in an opera taking place in the American west, on American soil? Any different than other roles or stories?
I feel privileged to be singing my first Minnie in the right place for it! I’ve learned such a lot since I’ve been here, about the “Wild West” in general, a fascinating history, and how to handle a revolver! We have no hand guns in England, so this has been a completely new thing for me. Everything I’ve learned I can take away with me for future productions. I couldn’t wish for a better cast of cowboys either!

Puccini said that La Fanciulla del West was one of his greatest works. Yet, it didn’t turn out to be one of his most well-known like La Bohème or Madame Butterfly. Do you agree with him, that this opera is one of his greatest? Why do you think it never got as much attention?
I think it’s a wonderful opera, and it must have seemed so new and inspiring at the time, but his other operas are probably more organic. Someone described Fanciulla as a patchwork of Puccini, and that’s a great way of saying there are loads of good things in it, but perhaps it doesn’t have the flow of some of his better known works. This opera is much more about drama and is basically more conversational.

Now that I’ve sung the role of Minnie and worked on the production in great detail I think I can say why it’s rarely performed. For the main three roles you need really strong singer/actors. The role of Minnie is one of the hardest roles I’ve tackled with regards to the volume and heft you need in the bottom of the voice, of Wagnerian proportions, and then you need to sweep effortlessly up to many high notes, including a few top C’s and even a C sharp! The voices needed for this opera don’t grow on trees, so that’s the most likely reason it’s neglected.

La Fanciulla del West runs at the Ordway Center for the Performing Arts until September 28. For more information and to purchase tickets, head to www.mnopera.org.