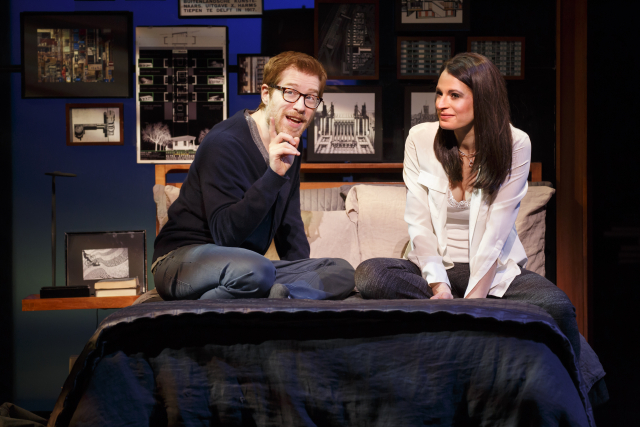 From the producer of Wicked and the director of Rent, If/Then is a contemporary new musical that follows two parallel storylines in the life of Elizabeth, a city planner who moves back to New York to restart her life in the city of infinite possibilities. When her carefully designed plans collide with the whims of fate, Elizabeth’s life splits in two. If/Then is a “fascinating, ambitious, and original new musical” (New York Post) set in New York City that simultaneously follows one woman’s two possible life paths, painting a stirring portrait of the lives we lead, as well as the lives we might have led.

Anthony Rapp (known for his role in the original Broadway cast as well as film cast of Rent), joins the tour in the role he originated on Broadway: Lucas. In both timelines, Lucas is an old friend of Elizabeth’s, harboring romantic feelings or at least nostalgia for their past relationship. But the trajectory of their friendship — and of Lucas’ life outside of that — vary wildly depending on which version of Elizabeth is at the center. One of the complexities of Rapp’s character is his fluid sexuality. In one timeline, he pines after Beth, but in the other, he finds himself in a relationship with a handsome doctor named David, played by Marc DeLaCruz. Despite the fact that Elizabeth proclaims her distrust of bisexuality, If/Then is fully invested in the idea of sexuality as a spectrum. For Rapp, who identifies as a “four-and-a-half” on the Kinsey scale, If/Then’s intrinsic queerness is a major asset.

You’ve toured a bit before. What’s the main difference between touring and doing a Broadway show? What pushes you to decide to tour?
Anthony Rapp: When I do a Broadway show, I’m at home with my friends and cats and my local restaurants and in my routines. And on tour it’s a new city every week, or every other week, or whatever it is. But I also have lots of friends and family spread all over the country. So, it gives me a great opportunity to catch up with people that I haven’t seen in a while. And I’ve toured before, so I’m also getting to see how much all of these cities have changed and gotten better over recent years. There is a renaissance going on all over the country.

What is the importance of original work like If/Then on Broadway in comparison to adaptations?
AR: I think it’s pretty vital that we have the opportunity to have original material created for this media. But that doesn’t mean all adaptations are problematic. I mean, Rent is an adaptation of La bohème which is an adaptation of stories. I think it’s pretty great when brand new ideas can be expressed through this quintessentially American medium. I think that [original musicals] may be a little fewer and farther between than the big, mega-adaptations of big popular movies/traditional musical comedy that has a little more broader appeal. But I think that as long as there are people like [If/Then producer] David Stone in the world who put their money where their mouth is in terms of supporting new voices and are willing to take risks and develop new voices and new ways of telling stories in musical theater, in the musical theater language, I think there’s hope.

You’ve spoken passionately about the complexity and emotion of this show. Is that something you look for in a role?
AR: I want to have a full meal, myself, as a performer and an audience member. It’s not that I don’t enjoy being entertained (although If/Then is entertaining), but I want to be in the presence of material that has a little more on its mind than simply making you smile. Again there’s nothing wrong with that, I enjoy just smiling, but I’ve just never been a huge, huge fan of shows like Crazy For You and The Producers. I understand them, and they’re funny and they’re fun, but… when I go to the theater, that’s not what really excites me. What excites me are things like Spring Awakening and Next to Normal and Rent. 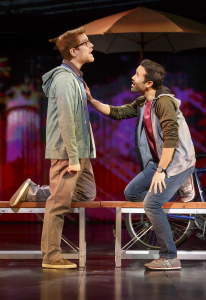 You’ve talked before about the parallels between your character, Mark, from Rent, and Lucas, but that you don’t experience playing the roles as similar. Can you tell me a bit about that?
AR: Mark is the driving force of Rent and almost never leaves the stage, so it’s a different responsibility. He’s always in the corner, helping the story move along, but Lucas is very much a supporting role for Elizabeth; it’s a different responsibility. They’re in very different places of their lives; I think they’re quite different kinds of people. Lucas is an interesting blend of idealistic and cynical in terms of life and love, whereas I think Mark is much more glaringly idealistic.

This is probably one of only a couple shows to tour to Minneapolis that features openly gay and lesbian characters, especially in recent memory. What is the significance of these characters for the GLBT community?
AR: I think it’s one of those important things that’s happening, the GLBT characters are simply themselves and the fact of their lives being expressed the way they are, there’s no issue of them being gay or lesbian or bisexual. They just are that. And then the issue is more about who they are in love with and how that relationship is going. They’re not coming out of the closet. Not to say that there is anything wrong with those stories, they have a role to play too, but it’s important to have stories in which those facts are just part of the fabric and not the main focal point. Their sexuality’s not an issue per se. So in that sense, it’s very sort of post-gay, post-identity … Of course, there still needs to be stories told. But more and more, I hope there can also just be, We’re all in this together, like my character says, and it doesn’t have to be about the issue itself of whether someone’s gay or straight.

If/Then runs at the Orpheum Theatre March 8–13. For more information and to purchase tickets, head to www.hennepintheatretrust.org.