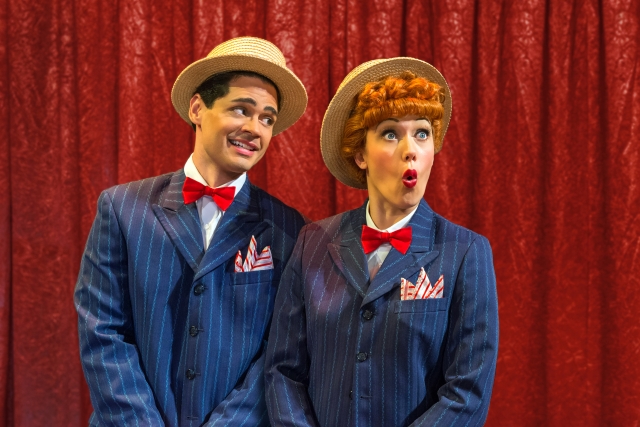 I Love Lucy Live On Stage is the brand-new hit stage show adapted from the most beloved program in television history. It’s 1952 and you are a member of the Desilu Playhouse studio audience awaiting the filming of two I Love Lucy episodes. A charming host entertains and enlightens you to the behind-the-scenes filming process of this brand new thing called “television,” the Crystaltone Singers perform advertising jingles in perfect 50s style harmony and the antics of America’s favorite foursome – Lucy, Ricky, Fred and Ethel – are presented live on stage and in color!

Mark Christopher Tracey has been with I Love Lucy Live On Stage from the beginning of its run, originating the role of Maury Jasper, the Desilu floor director and host. He acts to welcome the modern audience into the performance and act as though they are back in the 50s at a filming of the show, complete with a blinking “Applause” sign.

Please describe your character Maury Jasper. It sounds like a very important one for this show. Was there a Maury in real life who was part of Desilu?
Mark Christopher Tracey: Maury Jasper functions as a sort of bridge to early 1950s Hollywood.  When I address the (modern) audience, I’m behaving and talking like we’re all considering carefully whether we’re going to vote for Dwight Eisenhower or Adlai Stevenson; whether we should plump for wide white walls for our Plymouth or stick to the black walls; and, most importantly, WHEN the price of a first class stamp will jump to four cents! In other words, my unspoken message to the audience is: “Hey, I’m here in 1952 Hollywood…and so are you, so come along!”

Job description-wise, Maury is a sort of composite of audience warm-up guy, floor director and host. There certainly were people who did Maury’s job in reality – about three of them! There even was a man on the staff of I Love Lucy named Maury (Thompson) and he can be glimpsed ON CAMERA in the famous ‘Vitameatavegamin’ episode. The real inspiration for my role is in a man named Roy Rowan who opened every episode filming (remember they can’t be called TAPINGS since video tape wasn’t invented until 1957) by introducing Desi Arnaz, who, in turn introduced the rest of the “Fab Four”, Fred, Ethel, and, of course Lucy. Roy also appears on camera in a couple early “I Love Lucy” episodes as, predictably, the audience warm-up guy for Frank Nelson’s radio game show host Freddie Fillmore.

You originated the role and are back playing Maury again. Does your approach to the character ever change?
MCT: I originally was cast as “Fred Number 2” back in 2010, intended to be alternating with the man who eventually played Fred, the very funny Bill Chott. But, ultimately, Bill was chosen, due to the fact he was already, well, chunky, already bald, and already had a very gravelly voice! The director of our show, Rick Sparks, said to me, “Don’t worry Mark. I have something in mind for you that’ll fit you like a glove!” Hence Maury Jasper. Having worked on almost a dozen shows together, Rick knows me pretty well! Doing Maury allows me a great deal of freedom to improvise (within the historical parameters of the early 1950s) and draw on my fondness for and knowledge of the period. I attempt to have Maury be a combination of equal parts Art Linkletter, Bob Barker (“Truth of Consequences” vintage) and a pinch of mischievous Groucho Marx! In other words, I need to be, above all, nice, polite, but also funny! This intention has not really wavered at all since 2011. 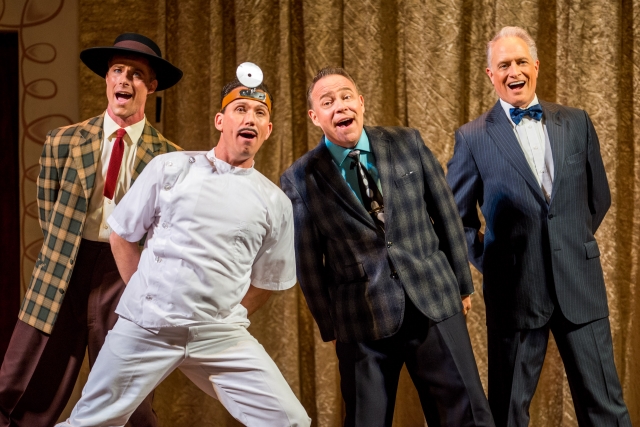 What have been some of the favorite moments for you doing the show? It’s got to be great to recreate such an American classic.
MCT: Without a doubt, my favorite moments during the show have always occurred during our game show, or “I Love Lucy Quiz Contest,” as it is more properly known. Between the two actual I Love Lucy episodes we present, I take the stage and ask for volunteers from the audience to come up and test their knowledge of I Love Lucy in order to win “a fabulous prize.”  People completely change sometimes between the time they leave their seats and the moment they step up to the vintage microphone onstage! Probably the most unexpectedly hilarious moment happened in Toronto when we were there on our tour last year. A middle-aged lady–I’m sure very proper ordinarily–didn’t like that she got the answer wrong and blurted out….well, “the S word.” Now you just DON’T say that out loud in 1952, maybe a sailor off a trawler, but NOT a lady! Truthfully, I think she’d been enjoying a libation before the show. Well, I had to hold for what was probably a full minute, waiting for the audience to stop laughing, and, all the while, concocting what I was going to say as Maury. I thought: what would my mom say to me if I’d been so indelicate in public? I looked down at the “fabulous prize” – an oversized bottle of shampoo – and said “You know, I could probably use that Halo Shampoo to wash out that dirty mouth of yours!” All with a smile, naturally! The lady was, predictably, mortified but, in context, was a good sport! Just another day in the life of The Game Show!

With Lucy being syndicated and never leaving the air, younger generations still fall in love with her. What does the live show add to the iconic show?
MCT: ALL ages LOVE Lucy!  From the beyond-belief adorable TWIN ten year old girls who came to our Miami opening dressed – both – as Lucy (!) to the busloads of older matinee audience members who “were there” for Lucy the FIRST time around, our show is truly for all ages. People have such fond memories of watching the show, perhaps with a long-passed grandmother. Or running home from school to catch a daily episode. Or staying home in bed, nursing a cold, made just slightly more tolerable by tuning in to I Love Lucy. Their memories of the show are cast in bronze. Black and white “bronze,” that is. Seeing these memories brought to life in color is, truly, transformative. Hearing the lines they have heard so many times spoken aloud just crosses a memory barrier and makes it all fresh again. And what’s better than reliving a cherished memory “for the first time?”

CBS was strict about the I Love Lucy scripts, saying they had to be done exactly as they were written, and CBS also insisted that all sets be true to those familiar with the Ricardo living room and Ricky’s Tropicana nightclub. How difficult has it been to maintain such accuracy while still trying to bring a new flavor to a current live show?
MCT: The sets have been very carefully designed both to give the utmost flavor of the originals and, very importantly, be constructed so they can be de-constructed quickly and packed away from town to town. One of the strangest aspects for me is, when we are performing our final show in a given venue, the crew is packing up (behind the scenes) as the play progresses! It’s just like in the Pleasant Peasant operetta when they start repossessing the set, piece by piece, in the middle of the show! The LAST thing to be packed away is my vintage headset, since I wear it practically up to the last moment in the show. The items in the apartment set (all carefully velcroed in place, mind you) reflect the extreme attention to detail that our producer, Hyra George, has brought to the set dressing. The two things I hope we can find or create some day soon are the “lustres” which are the ornate “candle holder” items that almost always sit on either end of the piano when it is upstage under the window.  It wouldn’t be a good idea to actually have a set made of glass, as the originals, since they would be too fragile to handle and pack constantly. But I’m hoping we can fabricate some duplicates out of plastic or something and get the same effect.

I Love Lucy Live On Stage runs at the State Theatre through January 25. For more information and to purchase tickets, head to www.hennepintheatretrust.org.