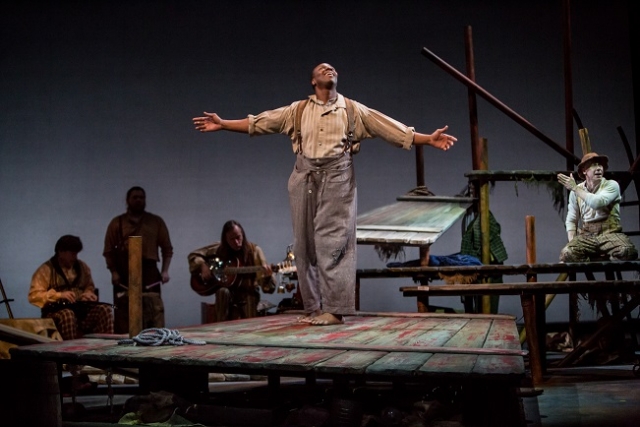 The tale of Huckleberry Finn is as American classic as it gets. Based on Mark Twain’s classic Adventures of Huckleberry Finn, the Children’s Theatre Company (CTC) stages Huck Finn, an unforgettable journey allows audience members to run away with rapscallions Huck and Jim, finding hijinks and history and hilarity, all wrapped up in one unbreakable friendship. The show is full of action, crackling dialogue, and utilizes minimal actors transforming from character to character before your eyes. Huck Finn premiered at CTC in the 2006-2007 season and is part of the theatre’s ongoing commitment to reimagining classics for the stage.

In this inventive take on Twain’s classic story, acclaimed Twin Cities actor Ansa Akyea takes on the roll of Jim (along with many other characters). In creating this production, CTC confronted the controversy that the book has courted since its publication in 1885. Originally banned because of Huck’s “coarse language” and “crude behavior,” Adventures of Huckleberry Finn has more recently come under fire for its use of the N-word. Carefully weighing the decision of whether to include the use of the derogatory word as it is used in the original text, the creative team ultimately decided that the word would prevent audiences from experiencing the extraordinary power of this story. The relevance of the story today is what attracted Ansa Akyea to this production.

Why did you agree to sign on to this role?
Ansa Akyea: I agreed to sign on to do this role because I wanted to challenge myself as an artist and actor in taking on multiple characters and revisiting a production and subject matter that I had already done with new insight and experience. Furthermore I wanted to continue working with CTC’s commitment to bringing life to stories that meet young audiences where they are in a complicated world.

The production is an ensemble driven piece with three outstanding actors (with my counterparts Dean Holt and Reed Sigmund)  and two excellent musicians (Victor Zupanc and Joe Cruz), but I represent the experience of one human being (Jim) who is breaking out of the bonds of chattel slavery with the help of a young boy who is also seeking his freedom from his repressive and abusive family and environment.

What do you want your children to gain from seeing the show?
AA: I want my children to understand that they are the masters of their own destinies, that no one can set limits on their ability to become whatever they need in life, and as such that they should be ready to go to whatever lengths to exercise their freedoms to live their lives to the fullest. I want my children to gain a sense of what truth, courage, persistence, love, and grace looks like in the face of overwhelming odds.

Being that this story is banned from many school curricula, why produce this show in a children’s theater?
AA: There is no better place to bring stories to life to young audiences than in a children’s theater, where they are capable to form their own ideas around complicated subject matters, such as freedom, slavery, racism, and injustice in a world that will be theirs to shape. Also banning this story from school curricula doesn’t mean theaters can’t bring its themes, problems, and ideas to the theater for all to see presented to a community, and children surrounded by their peers where their senses and imaginations can question, challenge, and possibly find more than they might in the confines of a structured classroom setting where controls around banned stories might never see the light of day. Perhaps the education can also happen outside of the classroom in a creative and intellectually stimulating way that is rooted in American literature and a historically specific setting. 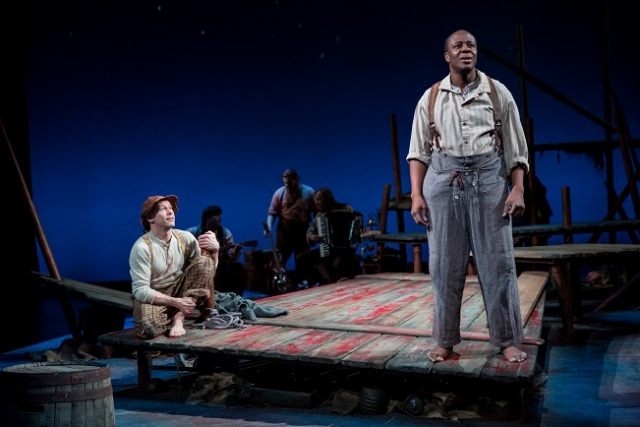 Using this story as an example of racism in the past, how does it relate to where we are at today?
AA: This story challenges our notions of racism as a relic. It reminds us that we still operate under the influence of a divisive and destructive set of learned beliefs that deny a people their humanity for profit motive. Racism still infiltrates our society in the most personal and intimate spaces of family, faith, individual liberty, and that it must be rooted out by challenging our own entitlements and position in society. That race is a social construct that thrives in poverty, violence, ignorance, and self-serving profit.

It relates in the structures of institutional racism that forcibly exclude people of color, and makes difference a threat to homogeneity, in ourselves and our families, even our places of work. If we look at today’s challenges with police and communities of color throughout the country, the achievement gap, the income gap, rates of incarceration among African American males, access to health care, and employment disparities between African Americans and their white counterparts, one would be hard pressed to suggest that race and racism don’t occupy a place in today’s American society.

What kinds of adaptations are made to the story to present it to younger audiences?
AA: The exclusion of the N-word is a conscious choice made that invites younger audiences to look beyond the sensational, and obvious, and engages them with the work. The minimal set and attention to the action driven by the language as the actors change the space, time, and gender all are devices that adapt the story from the book form to the stage to present and engage with younger audiences in a challenging and dynamic way.

Huck Finn runs at the Children’s Theatre Company through April 4. For more information and to purchase tickets, head to www.childrenstheatre.org.