Dolly Levi is a delightfully scheming busybody who makes her living as a matchmaker in glamorous New York City. She’s out to make a match for Horace Vandergelder, the “well-known half-a-millionaire,” with the charming hat maker, Irene Molloy — but in the process, Dolly hatches a plan to snare a groom for herself.

Hello, Dolly! has garnered universal praise receiving ten Tony Awards, including “Best Musical.” Audiences will love hits such as “Put on Your Sunday Clothes,” “Before The Parade Passes By,” “It Takes A Woman” and the show’s rousing title tune hailed as one of the greatest production numbers in American musical theatre history, “Hello, Dolly!” Here are my questions (and subsequent musings) on Chanhassen Dinner Theatre’s production of the musical. 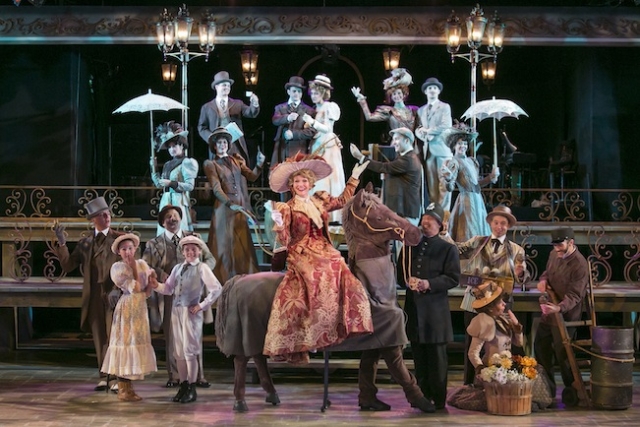 The cast of Hello, Dolly!
Photo by Heidi Bohnenkamp

Why do we continue to love a musical that is so rampant with sexism?
In today’s culture, we are quick to jump on (and label!) anything with any hint of an –ism. “That’s racist!” “He’s homophobic!” and the attention on feminism in popular culture is reaching new heights. So why, then, do we continue to flock to old standbys like Hello, Dolly! which feature gross examples of sexism, male privilege, and heteronormativity? Given, the show is set in early turn-of-the-century New York, I’ll give it that. So it’s a different time period with different standards. But that doesn’t stop audience members from singing along and bobbing their heads to the songs which explicitly layout how sexist the show’s characters really are.

Take the song from early in the first act which sets the groundwork for the rest of the production: “It Takes A Woman.” Detailing how they envision their ideal “dainty woman, a fragile woman,” the men sing, “It takes a woman all powdered and pink / To joyously clean out the drain in the sink / And it takes an angel with long golden lashes / And soft dresden fingers / For dumping the ashes.” And, really, the lyrics go on to detail the ideal housewife. So I ask: why do we continue to love this show? I’m at a loss for words. Is it because it is so symbolic of fond memories of Barbra at her best? Why do we give this show (and others like it) a pass, but are so critical of everything else? Is it time we retire the show, or is it fine that we embrace it, and even love it?

Did anyone else notice the sugar daddy subtext?
Let’s be blatantly honest: the thing everyone is focused on in this show is money. Love comes later. When talking about Horace Vandergelder, everyone mentions that he is a desirable bachelor because he is a “well-known half-a-millionaire.” Everyone wants to be taken care of, or find a wife to take care of. Which I can’t help to compare to the rising trend in gay culture (or at least the rise in visibility) for a young gay man to shack up with a sugar daddy. Is this what draws a gay following to the show — because it is an allegory for what’s going on in our own culture? Admittedly, I didn’t notice this until it was pointed out to me by my “plus one” for the evening, but after it was mentioned, it became glaringly obvious. It harkens back to other standby favorites like Breakfast at Tiffany’s, My Fair Lady, and more. The storyline is the same: poor woman shacks up with a wealthy man and has all of her needs met. Even Cinderella did it! Although these stories all feature heroines instead of homosexual relationships (I blame Hollywood for that), we still love these stories. We love to imagine ourselves in their positions, “complete with the happily ever after” which, more often than not, includes an increase in socioeconomic status.

Is it time that we call out the sexual tension between Barnaby and Cornelius?
Even in the film version, the relationship between Vandergelder’s clerks, Barnaby and Cornelius, seems a bit friendly. No matter which production I see, I notice the same thing; the two men should just chuck social norms of the time period out the window and enjoy each other. In Chanhassen’s production, the two even share a kiss on the cheek within the first few minutes! Now, it’s been a while since I was in a local production of Hello, Dolly! so I can’t say for sure, but I’m fairly certain that this tension between the men isn’t blatantly written into the script. Yet it makes into every production. Why is that? If “gaydar” was an actual thing, the alarm would sound for these two. Again, it isn’t the fault of the actors in Chanhassen’s production. As I’ve said, I notice it in every production I see. It’s something about the script and the show itself. Look out for it and let me know if you notice it, too. 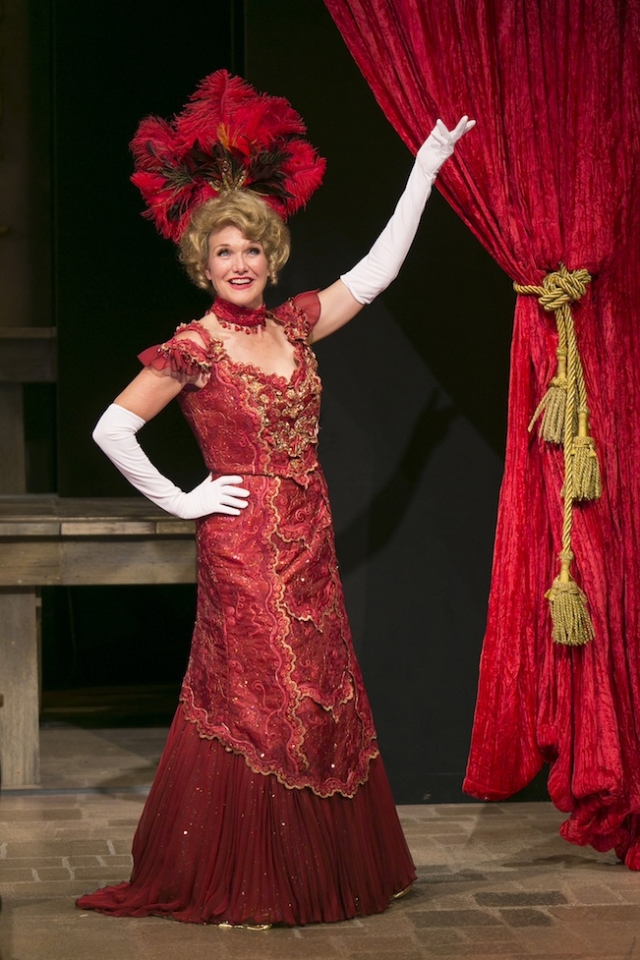 How is it that some comedy never goes out of style?
As much as I’ve harped on the sexism and homosexual undertones to the show, it is still filled with comedy that never seems to get old. Tyler Michaels as Cornelius in this production is reminiscent of the young Dick Van Dyke with his physical humor and nimble feet and who doesn’t love classic jokes about marriage and relationships? Somehow this brand of humor has stuck around and is only copied in Hollywood productions of today. Why not go back and appreciate the original? There are laughs throughout this show and the cast does a great job delivering lines with great comedic timing. Michelle Barber, in the title role of Dolly, has an ease of humor and elegance. It’s not often that I laugh out loud during a show, but this cast put me through the paces. A cackle here, a guffaw there. I’ll admit that I was cracking up the entire time. A smile never left my face.

Where do these voices come from?!
Seeing this show is a wonderful reminder: there is some remarkable talent in Minnesota. Sure, Barber is no Streisand, but let’s face it, no one ever will be. She might not have Streisand’s thunderous vocals (notably a less powerful “Before The Parade Passes By,” but she is still a vocal powerhouse, as is the rest of the cast. She’s confident, but never pushy, and gleefully brushes up against the fourth wall, delivering both her dialogue and songs with a wink and smile to the crowd. Barber’s Dolly is so likeable, it’s sad to realize her ultimate goal is to trick a rich guy into marriage. It’s always a joy to hear a great voice belt out show tunes and Chanhassen’s Hello, Dolly! comes through.

Hello, Dolly! runs at Chanhassen Dinner Theatres until February 21. For more information and to purchase tickets, head to www.chanhassentheatres.com.