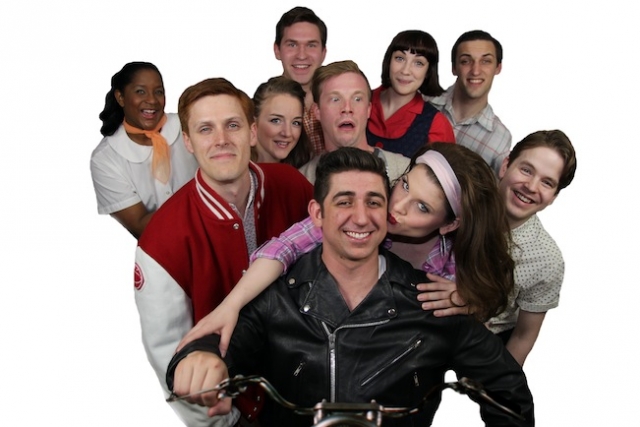 Sunday, Monday, Happy Days! All of your characters are back for a fun new musical. Happy Days – A New Musical brings one of television’s best loved families to the stage. When Arnold’s, the town’s number one hangout and malt shop, is in danger of being torn down, Richie, Potsie, Arthur “The Fonz” Fonzarelli and the rest of the gang team up to save it with a dance contest and a TV-worthy wrestling match. In a race against time, can The Fonz save the day? The television series’ original creator Garry Marshall wrote the book. Happy Days features 21 songs by Oscar, Grammy and Golden Globe award-winning songwriter Paul Williams, including the series’ iconic theme song.

Local actor Eric Heimsoth is making his debut with Minneapolis Musical Theatre as Richie Cunningham, the lovable all-American Midwestern high school student. Originallyf rom Grinnell, Iowa, Eric graduated from St. Olaf College with a degree in theatre and a concentration in womens studies. Since moving to Minneapolis, he has performed with several theaters in the area including The Jungle, Children’s Theatre Company, and History Theatre in St. Paul.

What does having the television show’s original creator do the writing for the stage show add to the production?
Eric Heimsoth: I think it lends an incredible amount of authenticity to the show. It feels like a natural extension of the television series. Instead of seeing these characters through the lens of another playwright, we get a sense that these characters do and say things the way they always have. It would be easy for a musical like this to wander too far into caricature, but having Gary Marshall as playwright keeps the show grounded in the world he created.

Recreating a beloved television character is never easy. How do you approach it?
EH: It’s always difficult because the audience comes in with certain expectations. If you try to do a full on impersonation it needs to be spot on or audiences and critics will collectively wince. At the same time, someone could do a perfect Ron Howard and still be criticized for not bringing anything new or original to the role. I think the best philosophy I’ve ever heard on this topic came from Reed Sigmund while he was working on The Wizard of Oz. If you try to reinvent something as iconic as Bert Lahr’s Cowardly Lion you run the risk of completely alienating your audience. You can try new things and make a character your own, but you have to give the audience a little bit of “the familiar” so they’re willing to trust and follow you with the new. You won’t see a Ron Howard impersonation from me, but I hope through mannerisms and speech pattern to make my Richie Cunningham recognizable and familiar.

What does this musical add to the legacy of the television show?
EH: Fans of the television show will recognize the play as sort of a sequel to the three-part episode “Fonzie Loves Pinky.” We see the return of Pinky Tuscadero and the Malachi Brothers. Pinky was originally meant to be a long-term love interest for The Fonz, but was soon dropped from the show because the actress who played her didn’t get along with the cast or producers. I think this musical offered Gary Marshall the opportunity to wrap up that story line the way he had always intended. 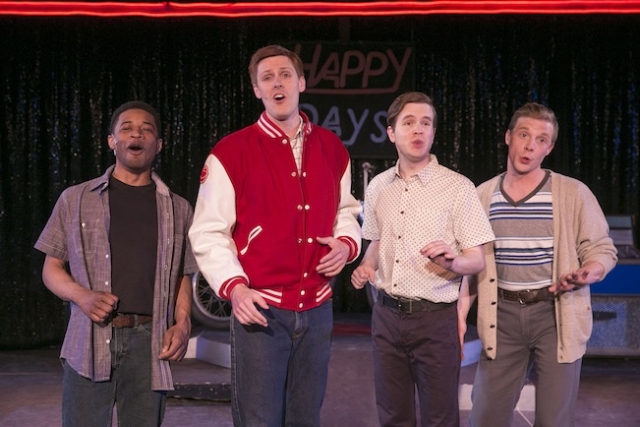 Fans of the show might have discretions about turning it into a musical. What do you say to them?
EH: I say, if you loved the TV show, you’ll love the musical. The show never took itself too seriously and neither does the musical. All of the music is written in the style of the decade, so it never feels out of place. People should realize that this isn’t meant to replace the TV show but to celebrate it. I think if people keep that in mind, they’ll have fun.

With the controversy surrounding the London production when the producer was criticized for telling a dancer to “strip the gay away” (she later said it was simply because the show is set in a time period when people wouldn’t be openly gay), how does this show situate itself historically? Obviously, with the Fonzi character, there is a certain machismo that is celebrated.
EH: The show and the characters in it are, without a doubt, a product of the time. I understand what Amy Anzel meant, but she clearly got her foot caught in her mouth. Certainly, guys like Fonzie, Elvis, and James Dean were all celebrated for their machismo, and as I mentioned earlier, audiences will come to this show with expectations, especially when it comes to Fonzie. It’s an actor’s job to take on characteristics of people different from themselves, and Fonzie requires a very specific style and physicality if he’s meant to resemble the character in the TV show. However, a director, or producer in this case, can probably find less insulting ways of asking for what they need.

Happy Days – A New Musical runs at the New Century Theatre through May 17. For more information and to purchase tickets, head to www.hennepintheatretrust.org.