Based on the Brothers Grimm classic, this beloved fairy tale whips together frothy folk tunes with sumptuous orchestration into a deceptively sweet, deliciously dark confection that has delighted families for generations. Minnesota Opera’s new production of Engelbert Humperdinck’s enduring masterpiece is appropriate for grown ups and children who aren’t afraid of the dark.

Instead of the traditional gingerbread house and Bavarian backdrop, stage director and choreographer Doug Varone sets the production in an impoverished urban area in the early 20th century. The children are irresistibly drawn to a beautiful and strange carnival world where the performers from Zenon Dance Company create a circus-like atmosphere.

It’s said that Hansel and Gretel isn’t categorized as a children’s show. It’s fun, but has an edge. What does that mean?
Doug Varone: I think that the thing that’s fascinating is that it’s based on this Grimm fairy tale. If we remember it as kids, it’s a benign story about these kids going in the forest and getting lost. Someone abducts them and they kill the witch and the kids win. When you read the Grimm version, it’s a horrible, horrible tale. Incredibly violent and not a children’s story at all. The opera has those elements seeded through it. What we tried to do with it is create a scenario that embraced those scenarios that creates a feeling that is uber creepy and still having fun. 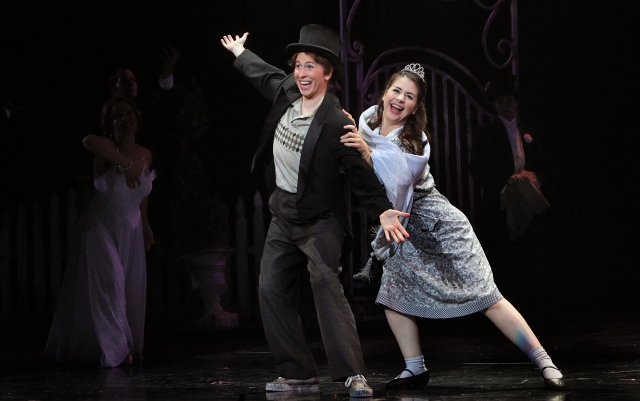 You updated this production, setting in an impoverished urban area in the 20th century. What was the thought behind that?
DV: Whenever I create and direct an opera, I always look to create in a world that feels familiar to me. And I wanted to locate something that felt very real for the environment that I was creating in. There’s something about the story, this idea that they came from a destitute family, that felt very honest not only in terms of what America is going through now but in history with the Great Depression. So we tried to locate a place and time to put these kids in-a real place that was recognizable to the audience so they have a jumping off point. I was looking to make it very familiar but also used the alternative universe of what was going on at that time. In terms of bringing the relief that Hollywood gives us into the production, as a way of escaping people’s realities, as happened in the 1930s.

Are audiences going to miss the gingerbread house, which you’ve replaced with a carnival merry-go-round?
DV: No, I hope by that point people realize they’re completely on a different ride. And we’ve at least set up this carnival-circus-freak show world as an evil universe alternative. 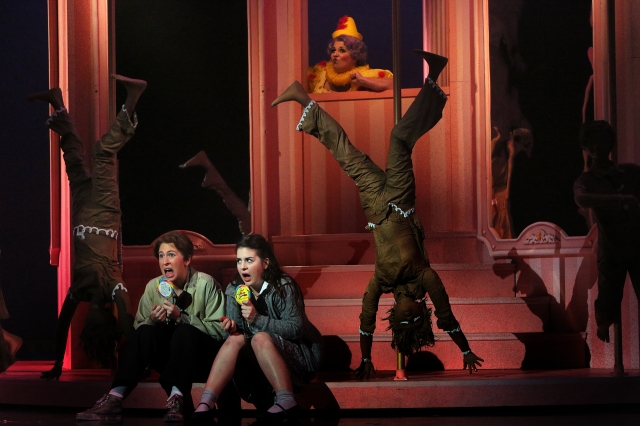 Performers from the Zenon Dance Company came on as partners to create a circus-like atmosphere. What does that add to the opera?
DV: It adds everything. I’m primarily a dance choreographer. What I love about directing opera and interweaving dance is it feels like a perfect marriage between two artforms. You allow the artists to be musical through movement-it’s not about the dancers themselves but all the artists on stage. If you look closely at the score and are watching the artists moving, using the dancers allows me to create powerful imagery. The dancers, for example, are moving the show forward by changing the sets and using people that do movement allows a production to have a more cinematic effect.

There’s a depth to this seemingly innocent “fairy tale” with universal themes of abandonment, cruelty, hunger, and fear-very typical of the Brothers Grimm. What do you say to people expecting a sweet fairytale with breadcrumbs?
DV: I definitely hope that they are open to seeing the imagination of a story that is familiar to them. It’s a dark tale but it’s also a really beautiful tale. It’s also about salvation, determination, smarts-all the things that are good about humanity also. So I think that comes through in the production, that there is this sense of good triumphing over evil which is what the tale is about. So if they are looking for those themes of the fairytale, they’re very much in there.

Hansel and Gretel, performed by the Minnesota Opera, runs at the Ordway Center for the Performing Arts until November 9. For more information and to purchase tickets, head to www.mnopera.org.