Ghost The Musical delivers a visual experience unlike anything you’ve seen before. Relive the iconic and magical moments from the Oscar-winning movie in a Broadway musical format. You will be amazed to see inanimate objects take on a life of their own, a person walk through a solid door right before your eyes and other special effects that has audience walking away astonished. Featuring an original pop score from multiple Grammy Award-winners Dave Stewart and Glen Ballard, the musical is adapted from the hit film by its own Academy Award-winning screenwriter Bruce Joel Rubin.

Steven Grant Douglas is a Minnesota native, having graduated from the University of Minnesota – Duluth. Douglas returns home with the touring production of Ghost in the role of Sam Wheat. Ghost follows Sam and Molly, a young couple whose connection takes a shocking turn after Sam’s untimely death. Trapped between two worlds, Sam refuses to leave Molly when he learns she is in grave danger. Desperate to communicate with her, he turns to a storefront psychic to help protect Molly and avenge his death. 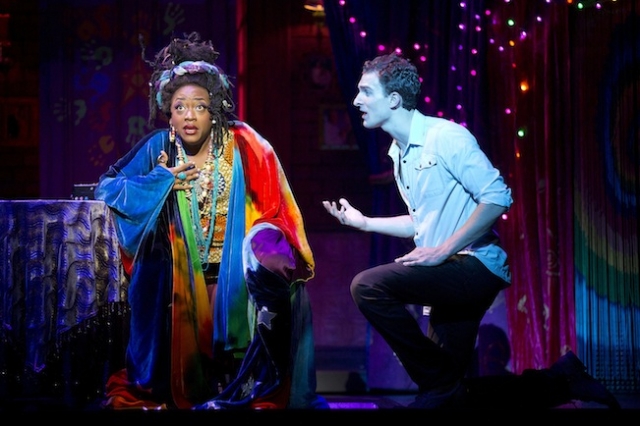 We’ve heard about the illusions in the show, which must have been a nightmare to plan on the part of the crew. But from an actor’s standpoint, tell me about the challenges involved with playing a ghost.
It has many challenges. I have to convince, with the help of the whole team of crew and cast, that I’m in a different world than everyone else. I was very careful when learning the movements; how does a ghost move as opposed to a human being? Everything is sort of sculpted around that. The visual effects blow the audience away every night and the audio effects help tell that story as well. Things to look forward to are the infamous passing through a solid wood door on stage. Also, encountering another ghost on a New York City subway car and, lastly, people’s souls escaping their bodies right before your eyes. It was really an honor to work with the illusionist on the show, Paul single handedly created all of the illusions on our show [Paul Kieve, whose illusion credits include Matilda the Musical and magic consultant on the film Harry Potter and the Prisoner of Azkaban]. He has many magical credits under his belt, but we as actors are not magicians. It’s funny because during the rehearsal process, I met him and was so excited to take a picture with him. Then I found out he was going to be spending weeks with us, guiding us hands-on throughout the illusions he created. Because we worked so closely with Paul, we carry such a high respect and admiration and excitement for each illusion. The audience then feels that radiate through us.

You’ve said in interviews that performing isn’t in your family, but that your parents supported you growing up in northwestern Minnesota. What’s it like, now, returning to Minnesota with a lead in a touring Broadway show?
It’s a dream come true. I was just looking at pictures of shows I did college. It’s crazy to think that was only four years ago; how is that possible? It seems like I’ve lived the past five years in the span of one year. I’m going to have seen over 30 major cities all across the US and I’m spending more than a week in each of them. I’ll get to know the food, and the local attractions, and the people. And I’ll be able to say I’ve been there! But there is nothing like bringing it home. For months now i have been living the dream. I’ve returned a couple times to see my family and it’s always been home, but for the first time the dream is going to be home and I feel like I am going to implode with excitement and nervousness. I had the chance to work on a couple shows in Minneapolis last year before Ghost; I never anticipated working in the Twin Cities when I graduated college. I was always the kid that said I was going to New York and I’ve never looked back. And it sort of fell into my lap that I was working in the Twin Cities, and I’m so glad that it did because I have so much more of a powerful connection with where I’m from and my home now than if I had just moved right away. I have so much more respect for all of my comrades working in the Twin Cities theater scene. They’ve helped shape me into the performer I’ve become. They have my utmost admiration and respect; I was humbled to be a part of it. Now, coming back as the lead in one of the biggest venues, it’s unfathomable. 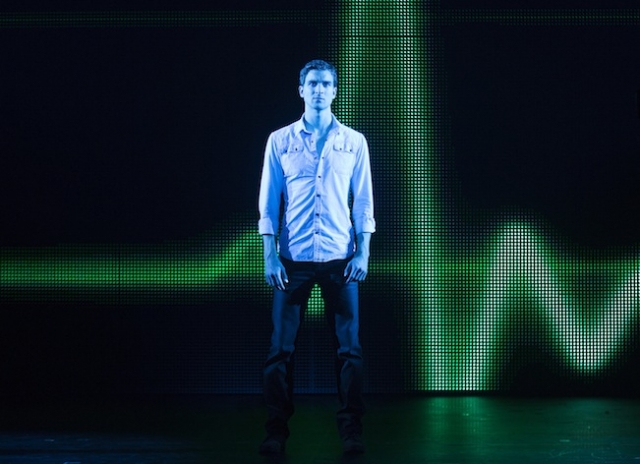 The role of Sam Wheat was a big break for Patrick Swayze. Does his performance or his journey influence the way you approach such an iconic role?
There’s no denying that when you say you’re in Ghost, they associate it with the movie. They say, “You play Patrick Swayze.” I say, “Yes, that is the short answer.” When auditioning, I had never seen the movie; it had never come across my radar. I think because I hadn’t seen it, it was actually a benefit for me because there wasn’t this unreachable idol image of who Sam was to me. My first interpretation of the story was through the soundtrack of the original Broadway cast. At first I didn’t fall in love with the music because it didn’t sound like a musical; it sounded like a band’s album and I love that! Knowing the music and auditioning for the show via a video audition that I submitted, they called me in for an in person interview. So on my flight to New York, I watched it on the flight. I watched it to get a feel for how the momentum carries through the piece and for the simple fact of watching brilliant actors do great work. I felt myself being inspired by Patrick Swayze, Demi Moore, Whoopi Goldberg, Tony Goldwyn…the four of them. Yes, it is intimidating to step into Patrick’s role, but early on in the rehearsal process, I learned that I can’t recreate what he did. I have to figure out how Steven from small-town northwestern Minnesota creates this character. The more I trusted my own impulses, it really helped sculpt the performance that I’ve done almost 250 times now. 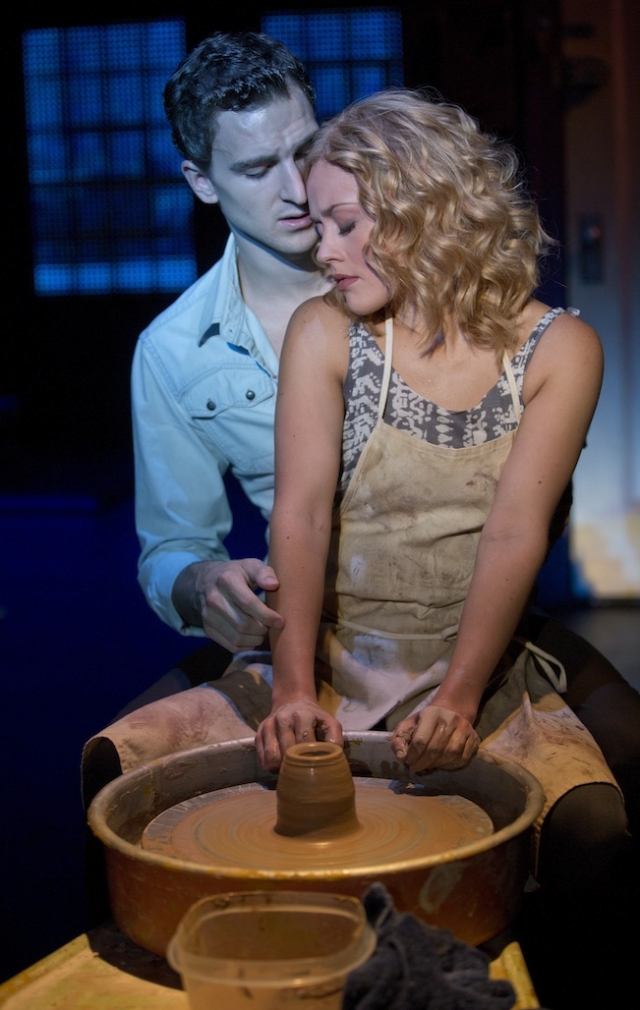 With a storyline so centered on intimacy—notably the pottery scene—how were you and Katie [Postotnik] able to meet as strangers and develop that familiarity?
I first actually encountered Katie in the callback process. It was literally like she sang in the room and I was in the hallway waiting and she came out and I said she sounded great and she said thanks. Then we both got the part and that was it! I was surprised that I didn’t have to do any read-throughs with women in that process. I actually told her about that encounter on the first day of rehearsal—she didn’t really remember it.

So, anyway, yeah…it was this weird moment shaking each others hands knowing what we were about to step into. But that’s what we as actors do for a living. We are constantly putting ourselves in new situations and opening ourselves up to people who do what we do. Each cast has a special bond because there has never been another cast with that same concoction of people. So it was a stepping stone process, you know, we’re gonna start kissing now in this rehearsal so that we get used to it. We’re gonna hold hands so we learn what the other person feels like. It’s like having a relationship with a person. Now it’s second nature. I go to work, see Katie, ask how it’s going, and ten minutes later we are making out on stage.

Funny story: early on, our director was like, “We don’t need you, Katie, or Carl for the rest of the day. Why don’t you go somewhere and have lunch and some beers and get to know each other?” So while everyone else was having dance rehearsal, we went to a pub and had some beers and shared some embarrassing stories about ourselves and it was a way to create the familiar bond you see on stage.

With such an iconic story, critics are saying it’s pretty true to the movie version, just with songs. Would you say that’s true? What do you hope audiences take away?
There are similarities and there are differences to the original film. The same guy who wrote the script for Ghost is the writer of our musical. So his voice is very clear. One of the biggest differences is that when Ghost premiered, it came out in 1990 and took place in modern day New York. When the musical was created, they did the same thing, but that means it’s gonna be different because we have cell phones and the fashion is different and things of that nature. It’s just something to take note of that it’s adapted to present day, which allows for even more high-tech aspects of the show to be pulled off.

And adding songs to it…when I finally saw the movie, I would hear one line from the scene and be like “Oh, my god, that’s the song that ends act one!” So it was so cool going back to see the movie and seeing the inspiration for the song, seeing where it came from. People’s favorite moments are going to be included and they’ll have new favorite moments. You have to come see the magic to believe it.

Ghost the Musical runs at the Orpheum Theatre until June 23. For more information and to purchase tickets, head to www.hennepintheatretrust.org.