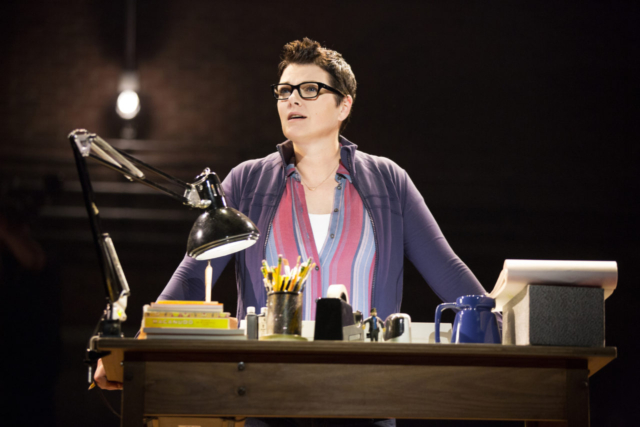 Fun Home, the 2015 Tony Award-winner for Best Musical, explores and unravels the many mysteries of childhood and seeing your parents through grown-up eyes. Based on Alison Bechdel’s best-selling graphic memoir, Fun Home introduces us to Alison at three different ages as she explores and unravels the many mysteries of her childhood that connect with her in surprising new ways, allowing us to look through Alison’s eyes as she reflects on the moments that made her who she is. The story concerns Bechdel’s discovery of her own sexuality, her relationship with her gay father, and her attempts to unlock the mysteries surrounding his life.

Kate Shindle steps into the role of Alison. The current president of Actors’ Equity Association, a longtime activist and former Miss America, Shindle is taking the theater world by storm, having previously played Vivienne and Sally Bowles in Broadway’s Legally Blonde and Cabaret, respectively, in addition to numerous other film, TV, and theater roles.

Your first encounter with Fun Home was seeing the Broadway production. You’ve said that you essentially saw the show and went, “I’m gonna do this.” What caused that visceral reaction? Why was it so important for you to do this show?
Kate Shindle: There are so many reasons that I wanted to be involved and it just all adds up to a gut feeling. But if I were to try and break them down, I would say first and foremost just the quality of the writing. Both watching it on stage and then also when I was getting to audition, reading the script off the page. The more time I spend doing this particular show, the better constructed it seems, which is really rare. I mean, it’s one of those really good pieces that you keep marveling at how well things are written even as you dig deeper into rehearsals and performances. The other thing, and this was a pretty common refrain around New York when the show was running there, is that it’s an important story. Whether you look at it as a story of a family where everything looks perfect on the outside and is not so flawless on the inside, or whether you’re as fascinated as I am of the coming out story — and the not coming out story, right? — the idea that the daughter can be understanding her sexual identity and in hindsight holding that up against how her father either didn’t understand or refused to acknowledge his sexual identity. That’s a really important part of it too. I was especially eager to do this on tour because I think that there are people all over the country who can relate to this, and I think there are people all over the country who can learn from it. And in the meantime it’s an entertaining show, I mean, it’s Broadway, it’s a great piece of theater. But I think it’s a really valuable piece of art, particularly at the cultural moment at which we find ourselves.

You’ve mentioned before the activist opportunities in playing a role like Alison and bringing this show on tour. What do you mean by that?
KS: Obviously our first responsibility in terms of doing a play like this, is making sure what’s on stage is as good as we can make it. That’s always job number one and that’s very clear to me. But beyond that, I’ve used the example a handful of times that I feel like there are places all over the country where kids have been kicked out of their homes for being gay and I want to go find those kids and say, “We see you and you are enough and it’s OK to be you.” To whatever extent that’s valuable, I would like to be able to offer it. And the other thing is, our second city was Durham, North Carolina, and we were almost sold out before we even opened in our first city, which was Cleveland. It was right before the election and the governor who signed HB2 was running for reelection and he had an audit. The chance to be there and be on TV promoting the show or do interviews with newspapers promoting the show and say, “By the way, HB2 is a terrible piece of legislation and I think you should vote for the other guy” is not a bad opportunity either. 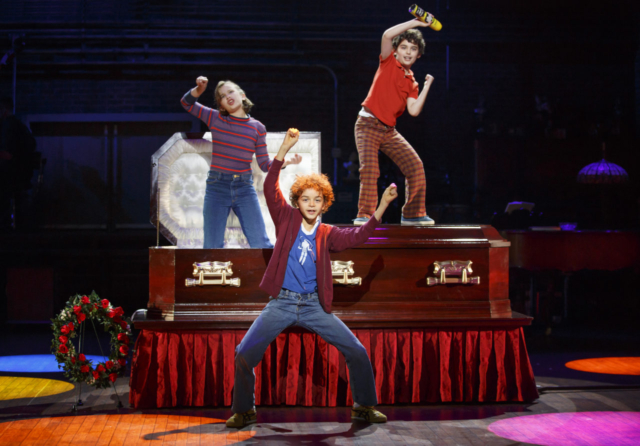 Some of the buzz about Fun Home touring was around the uncertainties about how Fun Home would be received in various cities on a tour. Now that you’ve been on tour for a while, how has the response been to Alison and Lisa’s story?
KS: It’s been almost uniformly rapturous. I hate to make it sound like everything is rainbows and unicorns, but frankly it’s been very positive. We are in city number five now, Detroit (Minneapolis will be city number six), so we’re not that far into it, but I couldn’t be more pleased with how involved and seemingly moved the audiences are. And the critical reception has been great! Depending on the size of the house, you can’t always hear every sound that the audience makes, but you sure can hear it when 2,500 people get quiet at the same time. I never look out from stage and see people checking their phones. It just blessedly not a problem with our show; people seem very attentive and invested in the storytelling and they’re leaning into the story in the way that you hope audiences will. I think a lot of that has to do with the fact that it is a piece of theater that gives the audience credit for being able to keep up and asks that they are present and thinking. But it’s awesome! It’s awesome being on tour with this show.

As someone who doesn’t act just to have a job, but goes after projects that excite you, do you use your background and passion for activism when deciding on roles to pursue, or how do you decide which shows to get involved with?
KS: When it comes to a particular play or show or whatever, the thing that attracts me most overwhelmingly is what’s going to be on stage. The opportunities for outside activism are exactly that, they’re icing. I don’t know that I would have wanted to go on tour with just any show that deals with the issues that our show deals with, but I was definitely excited enough about this particular show to think, “Man I could do that for a year without ever having one moment of reservation about it. And, oh by the way, there are some really great opportunities to talk about LGBT issues in a time when for some reason conversion therapy is still a part of the national conversation.” I mean what? That is always a bonus, but it’s an important bonus to me. I feel like opportunities to change the world don’t come around every day and when we see them, we should take them.

A lot of people have asked you about playing a real person, but I loved something you said once about getting too caught up on playing a real person and forgetting that you’re playing a character in a musical. Can you tell me a bit more about that?
KS: I’ve met Alison a couple times; she’s awesome. She’s obviously very cerebral, she’s interesting, she’s surprisingly warm and charming, and unsurprisingly creative and fascinating in her way. I couldn’t be a bigger fan. At the same time, the adaptation process of taking a book that was written about something that was real and turning it into a musical that happens on stage is a pretty unique process. To me, it’s important to research who Alison is and pay attention to some of her defining characteristics while not being so slavishly devoted to an impression that I forgot that I was actually playing the musical character version of that real person on the stage. But it’s kind of an amalgam. I’ve certainly watched the YouTube video of Alison shaving her head in the woods and I’ve watched videos of her drawing; doing due diligence is important. It would be lazy to say it’s a person in a musical and not pay any attention to who the real person is, but I you can get very caught up in doing an impersonation in a way that could not save the highest and best purpose of the character.

Fun Home runs at the Orpheum Theatre through Dec. 13–18. For more information and to purchase tickets, head to www.hennepintheatretrust.org.