Based on a 1982 black comedy film of the same name, Eating Raoul follows the exploits of a married couple living in Hollywood who resort to killing swingers for their money. The story focuses on Mary and Paul Bland, a couple of “squares,” in the late 1960s, who want to raise money to open a restaurant. Through a series of events, they decide to kill swingers for profit. They become involved with a partner, Raoul, their swarthy, sexy janitor, who helps them to dispose of the bodies. However, they soon feel trapped by Raoul and dispose of him as well.

The musical opened Off-Broadway at the Union Square Theatre in May of 1992, and has received various regional productions since them. Currently, Minneapolis Musical Theatre is bringing the musical to the Twin Cities under the company’s new artistic director, Christian Unser.

As the new artistic director for MMT, what is the vision you are bringing to the theater company, and how does Raoul fit into that?
I have been an actor with the company for over 10 years and that’s mainly because I believe in the mission: rare musicals, well done. Eating Raoul fits that to a tee. I know a fair amount about musical theater but I was completely unaware of [Eating Raoul] before someone brought it to our attention as a season contender. As for my personal vision, I’d like to continue bringing these kinds of shows to the Twin Cities. I’d also like to continue to find a balance between a few crowd-pleasers (like the upcoming Happy Days) and more challenging work.

MMT productions can get pretty risqué, and Raoul is no exception what with sexual innuendos, suggestive choreography, and plenty more. How do you walk that fine line without going overboard?
It 100% depends on the tone and plot of the show itself. In something like Eating Raoul, the sexual content is treated as campy fun so that’s the approach we take. In a show like Bat Boy, we had onstage nudity because the lead character was found living in a cave. I think you run into trouble when you go for shock value over something that is true to the show. And I don’t like to pull audiences in directions that aren’t necessary for the show. We could throw something shocking into Happy Days if we wanted to but we won’t because that’s not what that audience expects and it doesn’t fit the tone. I’m all for pushing the limits but at the same time my goal is never to give people a negative experience. 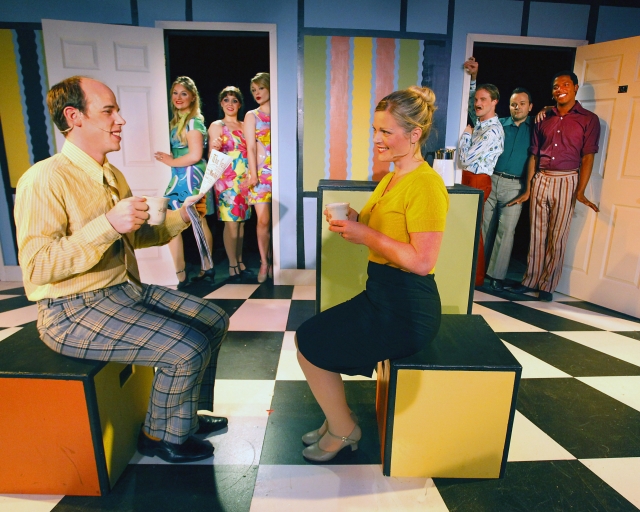 When Eating Raoul was first developed in the 80s, it served as a social commentary, a satire of ‘70s culture and cinematic stereotypes. What kind of message would you say the story brings today?
The Blands decide to do terrible things to achieve their dreams. But this is after a lifetime of the world pushing them down at every turn and punishing them for their decency. Not that it justifies it, but you can see where they are coming from. The message I have taken away is that sometimes you have to get out of your comfort zone to make a change in your life. This is especially true for people who are more set in their ways, like the Blands. Obviously this show uses more extreme examples of promiscuity and murder to get that point across but I still think that’s a good perspective to have.

How do you think the Blands were able to get away with what they did? What makes them so likable?
I think the audience understands that the Blands are the best of a bad group of people. And since the violence is so over-the-top and silly, it takes away some of the shock of what they are actually doing. You see the same thing in shows like Little Shop of Horrors and Sweeney Todd: characters having to lower their own morals in order to get ahead. But they do it with such a sunny disposition while everyone else constantly tries to take advantage of them that it’s easy to sympathize with their lot in life. Plus, you see them grow as characters, with a clear distinction from where they are at the beginning of the show to where they are at the end. I think audiences like watching people change like that.

With such an over-the-top story line and characters, the pop art feel of the set seems to fit right in. What was the decision making process like when deciding on the set design?
There were many conversations between our director, Ryan McGuire Grimes, and our set designer, Darren Hensel, about the look of the show. The door concept was there from the beginning as the show has to keep moving or the energy just dies. Also we really wanted a backstage cross which is something that’s not built into the New Century Theatre. That also helps with the momentum of the show. The bright colors and campy feeling offset the murder and mayhem happening on stage. And we wanted to make it clear that this was set in a bit of “hyper reality” full of outlandish characters. The set design was crucial to achieve this goal.