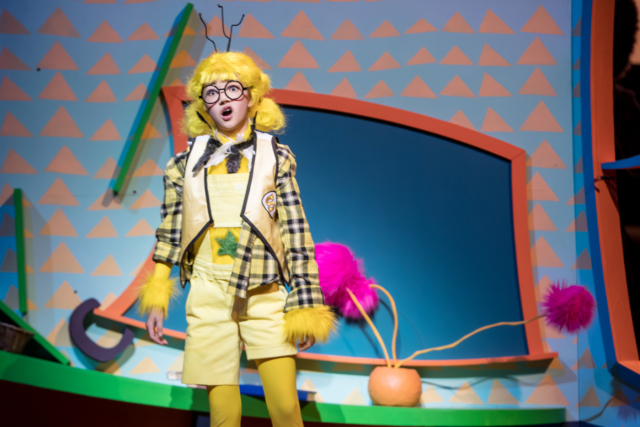 A powerhouse in premiering game-changing theater that appeals to young and old alike, Children’s Theatre Company (CTC) debuts the world premiere production of Dr. Seuss’ The Sneetches The Musical. This new production is the third Dr. Seuss work that CTC has commissioned in a historical partnership that dates back to the first production in 1979 of Dr. Seuss’s The 500 Hats of Bartholomew Cubbins.

On Sneetch Beach, there’s a line in the sand: Star Bellies on one side, Plain Bellies on the other. That’s the way it is, was, and will be. At least until the sneaky and greedy Sylvester Monkey McBean comes to town with his Star On machine. Suddenly, the difference between the haves and the have nots (those with stars and those without) isn’t so clear. What will the Sneetches do now? In this rousing and inventive musical adaptation of Dr. Seuss’ powerful parable about the surface things that divide us, it will take a courageous friendship between an unlikely pair of Sneetches to find the answers. The production is written by Philip Dawkins, whose many works have been produced from Canada to Washington DC to Los Angeles, and upcoming at the MCC Theatre (Off-Broadway).

Sneetches has so many great themes. How did you decide which ones to focus on while drafting the script?
Philip Dawkins: I agree, there are so many great themes. And I think we really tried to lean into all of them. Dr. Seuss’s writing and his allegory are so strong, that we wanted to be sure not to lose anything that he’d so carefully constructed. One of the things that Seuss always did so well was treat children with respect, with the assumption that they could engage with complicated and sometimes ugly themes. That’s what he does brilliantly in The Sneetches, and that’s what we tried to do with the adaptation. Themes of prejudice, bullying, segregation, genocide, xenophobia, culture wars, inclusion/exclusion, racism, media-control, classism, and the dangers of the capitalist machine….we lean into all of those. Because they’re all in the book. It’s such a gift and a heavy task to have such rich and trustworthy source material.

The president of Dr. Seuss Enterprises agrees with you and said that his books are so beloved because of Seuss’s deep respect for the intelligence of children. How does that play out in Sneetches: The Musical?
PD: We have two major protagonists in this play, and they are on completely opposite ends of the age spectrum. We have Standlee who is constantly being chastised for being too curious, for asking too many questions, and for not fitting precisely in with her predetermined crowd. And then we have Diggitch, an elderly Sneetch who has been bullied his whole life and never really got to have a childhood of his own. And these two Sneetches become very good friends. For me, it was not only important to show young characters being appreciated and listened to — being treated with respect — but to portray a wide range of ages, which is something I think Dr. Seuss always does well.

His characters are often ageless, allowing the reader to apply their own interpretation to the characters. But sometimes the characters are clearly young (as in The Cat in the Hat) or clearly old (You’re Only Old Once). His illustrations of the Sneetches depict them as either very young, or as “full grown” almost like birds. It’s difficult to know how old each adult Sneetch is beyond recognizing that they are no longer children. What we wanted to do in the dramatizing of this community that Dr. Seuss built is to show the full age spectrum and give young characters clear and obvious opportunities to engage as friends with characters multiple decades their senior. To broaden that circle of respect and caring.

Also, in our play, we have the child character instigating the desire for change within a community stagnating in its own prejudice. In the short story, we learn that the Sneetches eventually change their ways, but we don’t know which Sneetch (if any) is the instigator for such change. In our production, that spark comes from a child, which I think is completely in the spirit of Dr. Seuss’s deep respect for children. 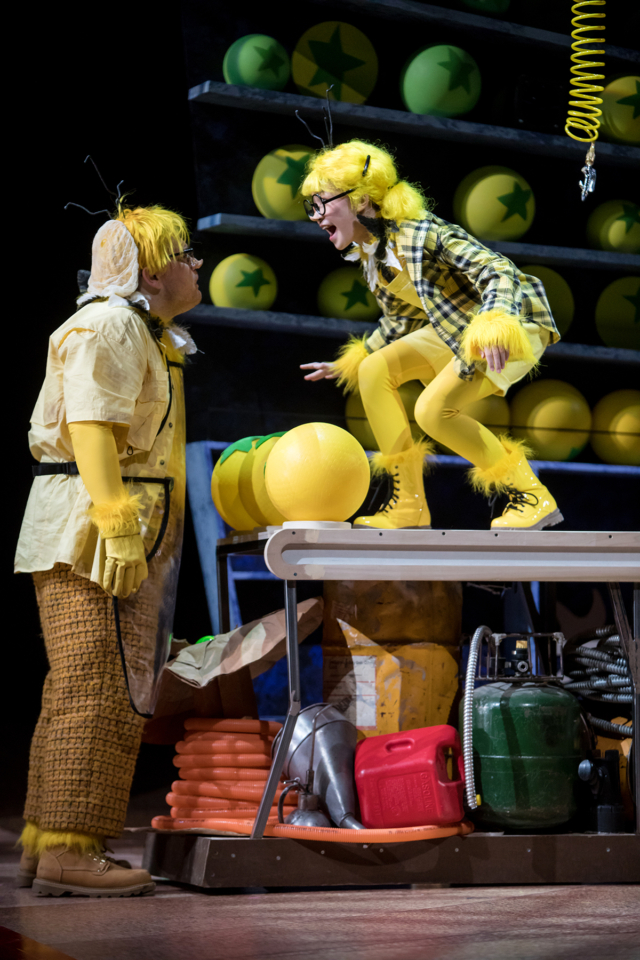 Reed Sigmund as Diggitch and Natalie Tran as Standlee.
Photo by Dan Norman

It seems like Sneetches is debuting at a very important time. Is that something you thought of going into this? What does this timing add to the meaning behind the show?
PD: You’re telling me! Yes and no. I mean, themes of oppression and othering and prejudice and capitalism are, sadly, always going to be relevant. But we had no idea just how relevant it was going to be. What’s sad and scary is that so much of what we put into this play when we started writing it over three years ago has suddenly gone from being allegorical to being exactly what’s happening in the world. For instance, we used to have a Mayoral character campaigning to build a wall in the sand to keep the Plain Bellies from crossing over onto the Star Belly side of the beach. And the Mayor character was suggesting that the Plain Bellies pay for this wall. When we started writing this over three years ago, it felt like a hyperbolic, cartoonish extrapolation of hatred and fear. But now? It went from being cartoony to being reality. And that’s terrifying. So much of this play has new resonance now. We ended up changing the stuff about the wall because it felt too on-the-nose all of a sudden, even though we came up with the idea before it became a veritable threat in North America.

What’s great is that children are smart, and families who come to see this play will be able to walk out with a bunch of talking points and questions. Children will understand these themes and, hopefully, with their families and loved ones, be able to talk about what they see in the world that is similar to what they see on this stage. I am excited to be having this conversation with the young people of today. It’s vital.

What do you hope parents are able to talk to their kids about after seeing this show?
PD: I think children and families will all come away with something different. For instance, we have a very ambivalent villain in this play. He’s able to justify everything he does legally and “logically,” but are his actions ethical? Good question. And one that I hope families continue to have on their car ride home. I think the play provides a number of moments where a child could ask “Well, what would I do in that situation?” Would I go through McBean’s machine? Would I be mean to people if everyone else I know was mean to that person? Is there a situation like that in my life right now that I’m not recognizing? There are lots of wonderful, “What would I do?” situations in this play, and taking that question back home with you, I think, will lead to some wonderful at-home conversations. If you see this show with a young person (or even an old person), I hope you take some time to ask them, “Well, what do you think you would have done in that situation?”

Your past works often deal with people’s identities right up front, whether it be gender, race, or something else. You’ve said that you really encourage diversity in all forms, not even caring if twins are played by actors that look anything alike. Where does that commitment to diversity come from?
PD: I think I don’t understand how not to deal with identity. It’s identity! Ha. We are all unique and fabulously flawed, perfect creatures, and what’s the point in trying to hide that? I do tend to get particularly bored and perturbed by seeing plays about the same population of characters over and over and over. The world is so large and huge and beautiful, why try to shrink it down and misrepresent it as being one experience over and over? Yuck. I’m in the business of telling stories. Stories are about characters. Characters have… character. I look at story-telling and story-receiving as a great relay race toward a finish line of Understanding. If we can share our stories with each other, especially stories that may be far outside our experiences of comfort levels, then that’s the best way to add another experienced team member to that relay race toward Understanding. Since I never really know who will show up at one of my plays, the best way to increase the odds of including a character whose identity is vastly different from someone in my audience is to include as many specific and diverse characters as possible. That way, hopefully, each audience may find someone with whom they identify, and someone who challenges them. Best case scenario, that character is one in the same.

Dr. Seuss’s The Sneetches The Musical runs at the Children’s Theatre Company through March 26. For more information and to purchase tickets, head to www.childrenstheatre.org.