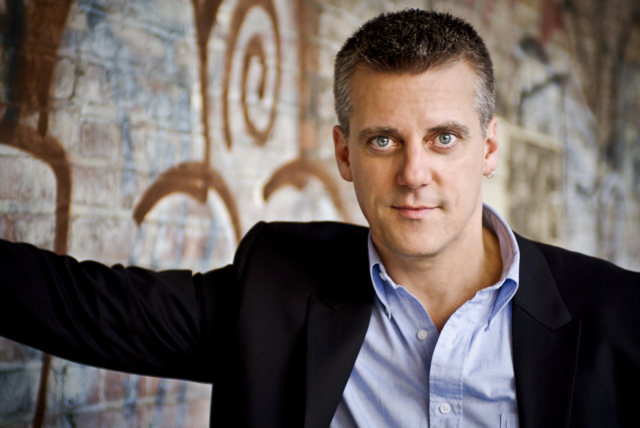 For the first time on its mainstage, Minnesota Opera presents Donizetti’s Don Pasquale to open the season. At its premiere in 1843, Don Pasquale was considered an immediate success. It was recognized as Donizetti’s  comic masterpiece and, to this day, is still given the same praise as the most popular of his 66 operas.

Having become a standard selection in many modern opera companies’ repertoire, stage director Chuck Hudson challenged the old standby by bringing the story into 1950s Hollywood. Now, the aristocratic Don Pasquale is a washed-up silent movie star facing the end of his career. Locked in a battle of wits with his nephew, Ernesto, and the widow Norina, Pasquale must grapple with the new problems and possibilities of the modern technicolor world.

Why the decision to bring Don Pasquale into the Golden Age of Hollywood? Why that era?
Chuck Hudson: The basic theme of the opera is an older man who realizes the years are passing him by and wishes to reclaim the vigor of his youth. Now, Don Pasquale is a comedy, so this is not Faust. the only thing devilish about it is in the comedy itself! In each production of Don Pasquale that I have directed, I have played around with the period setting; in one I focused on the commedia dell’arte roots of the characters and so I set the production in Renaissance Venice, complete with a gondola (which got faster and faster) for every entrance and exit. In another production, the music of the Act 2 Interlude — along with the title character’s name “DON” Pasquale — inspired me with “mafioso” imagery, and so I set it in 1930s Manhattan. In each, the chorus of servants always struck me as an interesting element in the action; Norina, disguised as the shrewish Sofronia, uses Pasquale’s money to hire tons of new servants for the manor.

About a year before creating this production for Atlanta Opera in 2014, I had taken a tour of Hearst Castle in California. There I saw photos of all the Hollywood parties Hearst threw there — photos of John Wayne, Marilyn Monroe, Elvis Presley, and earlier stars like Clark Gable and Carol Lombard all at one table, and usually intoxicated and laughing. I suddenly “saw” the chorus for Don Pasquale! The “magic if” of the theater had arrived: if the chorus are recognizable movies stars, perhaps Norina is a starlet in Hollywood. Hollywood in the 1950s was the end of the studio era and the height of the technicolor era, meaning Pasquale would be part of an older Hollywood that is passing away. Suddenly the Sunset Boulevard angle was clear and became the lens through which we decided to present the production; a world where the dying black and white movie era meets the innovations of vibrant technicolor.

How do you balance the silent film star aspect with opera, a medium with audiences that place so much emphasis on sound?
CH: Don Pasquale represents the “end of a musical era” since this is one of the last great bel canto operas. This is also one of the musically dramatic reasons I was attracted to the Hollywood theme. Like the silent era with black and white movies giving way to “talkies” and technicolor, bel canto gave way to verismo and through-composed musical works. The silent visual element in our production was inspired by the audible musical element, although that may not be apparent to an audience member.

Silent movies were accompanied by visually stimulating soundtracks, and the three silent movies in our production reveal Pasquale’s back story through both the music of the opera and the silent movies we created for it. In opera, “the music comes first,” but as a director and acting instructor for singers I say “the character must create the music.” To that end, the words “inhale” and “inspire” are the same words in Latin-based languages, like our opera’s Italian. The singers must “inspire” the actions because of the way the music sounds. Speaking actors are allowed to play with variations in tempo, volume, rhythm, and pitch to reveal the subtext behind their actions. In opera, it is not that we are “not free” to do that, but the composer has done that work for us in the musical score, and it is our job to discover how to make dramatic (or comic) sense out of these musical clues. In Don Pasquale, I believe the audience will discover how well action and music can combine to create easily recognizable characters who are like themselves. 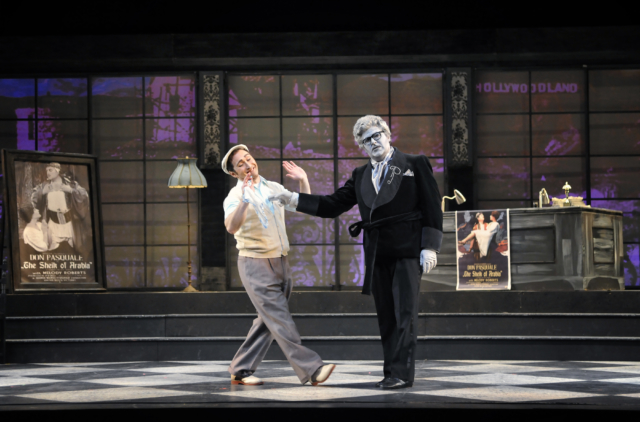 How has your experience as a disciple of famous mime Marcel Marceau influenced your take on this opera?
CH: One amazing thing about working with Marcel Marceau was learning about universal human behavior. His art goes beyond words: he could perform the same show in the United States, China, South America, Spain, Russia, France … and there was never a language barrier because everyone in every culture could recognize the human behavior we all share. Marceau’s audiences would laugh at the same things, cry at the same things, and would become hushed by the same things, no matter what language they spoke. He always said his art was closer to music than acting because of this universal reaction. Music “explains nothing” and touches audiences in profound ways.

The comedy and style of the acting in our Don Pasquale draws on what Marceau called the musicality of gestures. It is the rhythmic behavioral score of the action that is closely tied to the music, but is not following the music like dance. It makes an audience almost forget that the characters are singing. They inhabit a world where their behavior is suspended in a slightly heavier atmosphere, and you believe they need to sing rather than speak.

There are also entire scenes in this production that are my homages to specific mimedramas created by Marcel Marceau. My “riffs” on Marceau, if you will. One of the more advanced lessons in his work is creating the comic in the tragic and the tragic in the comic, allowing for a greater depth of truth in comedy. Ideally, he would say, he wants the audience to begin laughing at him and then realize suddenly that they are laughing at themselves.

You’ve directed versions of Don Pasquale at Cincinnati Opera in 2015 and at The Atlanta Opera earlier this year. How has your take on the opera changed? What makes you keep returning to this story?
CH: Both the Cincinnati and Atlanta productions were this production, the “Hollywood” Don Pasquale. Other versions, as I have said, were the commedia production and the “Mafioso” production. I return to Don Pasquale so often because the music is so delightful it makes this one of the most popular operas companies like to present, and the characters have the universal qualities from the Italian commedia dell’arte that make them recognizable to audiences no matter when the opera is set.

This particular “Hollywood” production continues to grow from company to company because the design team and I discover something new in each incarnation and with each specific cast. For example, there was only one silent movie in the original production: the initial movie that introduces Don Pasquale as a silent film star living in the 1950s. In Cincinnati we added two more movies about the downfall of Pasquale’s film career as he tried to stay relevant with the times, which play now during the scene changes in Acts 1 and 2. Here at Minnesota Opera, our musical staff has culled through various scores by Donizetti and created two “Donizetti piano interludes” to accompany those silent films, like a piano would have accompanied them in a silent movie theater.

Finally, each chorus in each city is peopled by a different selection of Hollywood movie stars. When the chorus is cast, we take photos of them so we can select which star they might best represent, and we have even created new characters for the particular singers who are cast in a particular city. 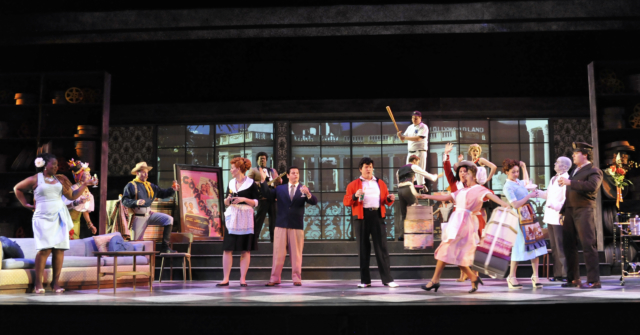 In your production notes, you talk about Don Pasquale using the champagne of comedy, rather than the stylistic beer of slapstick or vaudeville. What did you mean by that?
CH: In theatrical terms, there are various styles of comedy—a Shakespearean comedy, for example, may not even be funny, but it ends in a “balanced” and usually “happy” manner, making it different from a Shakespearean tragedy. We have satire, farce, dark comedies … in the language of plays we have humor, and wit, and even jokes. In the world of cinema, we have romantic comedies, adventure comedies, and even “dramadies.” We often identify comedic styles on a scale like a thermometer from high to low … high-brow comedy and low-brow comedy. High comedy is like Monty Python—you often have to think about the humor for a while before it becomes funny, and then it is almost absurd. Low comedy is usually defined by “physical comedy” and “prop comedy,” and especially laughing at the pain or misfortune of others: slipping on a banana peel and falling down, banging one’s head on a low door frame. Slapstick is a word that from Alrecchino’s baton in the commedia dell’arte which became the stick punch and Judy used to slap one another: a slap stick. The Three Stooges come to mind. The vaudeville stage was often a collection of sketches of various styles, finally leading to the creation of comedy teams like Dean Martin and Jerry Lewis, Abbot and Costello, and even Lucy and Ethel as the new technology of television arrived. Comics like Rowen and Martin then created “laugh in,” etc.

Marcel Marceau had us study many styles of comedy at his school, but mainly the commedia dell’arte and what he called “chaplinèsque” style because Charlie Chaplin inspired his own work. Personally, I find comedy to be “intoxicating” and the dizzying comedic music of Rossini crescendos, for example, is often described for its “verve” and its “bubbly” nature. This to me is the champagne of music. Donizetti gives us this same kind of bubbly musical verve in Don Pasquale. To pair that bubbly musical comedy with slapstick action would be like mixing champagne and beer!

Don Pasquale runs at the Ordway Center for Performing Arts Oct. 7–15. For more information and to purchase tickets, head to www.mnopera.org.