Widely considered one of contemporary African music’s most charismatic talents, Dobet Gnahoré live in concert has astounded audiences with her thrilling stage presence, appealing melodies and powerful singing. Gnahoré’s diverse music composition moves from delicate ballads to upbeat African grooves, and serves as a resounding introduction to this voice of the future.

Dobet Gnahoré, a singer, dancer and percussionist from the Ivory Coast, inherited the force of the “Bété” tradition from her father, a master percussionist. From Mandingue melodies to Congolese rumba, from Ivory Coast Ziglibiti to Cameroon Bikoutsi, from Ghanian High-Life to Zulu choirs, Dobet’s compositions, carried along with jazz-like sounds, are varied and colorful. The sanza, the balafon, the calebasse, and bongos are brought in to support the guitar, the vocal backup, and Dobet’s warm and powerful voice.

How did you get started in performing? How did you know this is what you wanted to do with your life?
DG: I was 12 years old when I knew I wanted to be an artist and follow in the footsteps of my father. My father was furious at the idea that I wanted to quit school to follow him, so I started to sing and dance more than the others to prove that this is what I wanted to do. My career began in the Ivory Coast. I started with dancing, and then added percussion and singing. I evolved as a performer and took my first steps in Ki-Yi M’Bock, an artistic community in the Ivory Coast, accompanied by several artists who were our trainers.

Tell me about your upbringing in Ki-Yi M’Bock and how that influenced you.
DG: Growing up in an artistic community gave me the opportunity to learn more at a faster pace because I was living in the middle of many artists. My father was the master of percussions of this community and contributed a lot to my learning. For me, living in this artistic village was a dream come true. I was immersed in rhythms, dance, and art around me 24/7.

Your music is described as Pan-African. What influences your sound and desire to bring that sound to the public?
DG: I compose with rhythms from all over Africa and I sing in many different languages to showcase the beauty and the diversity of our African languages. I aim to bring together people as much as I can, to highlight the richness of our traditional and urban values, and to remain aware and proud of our heritage. 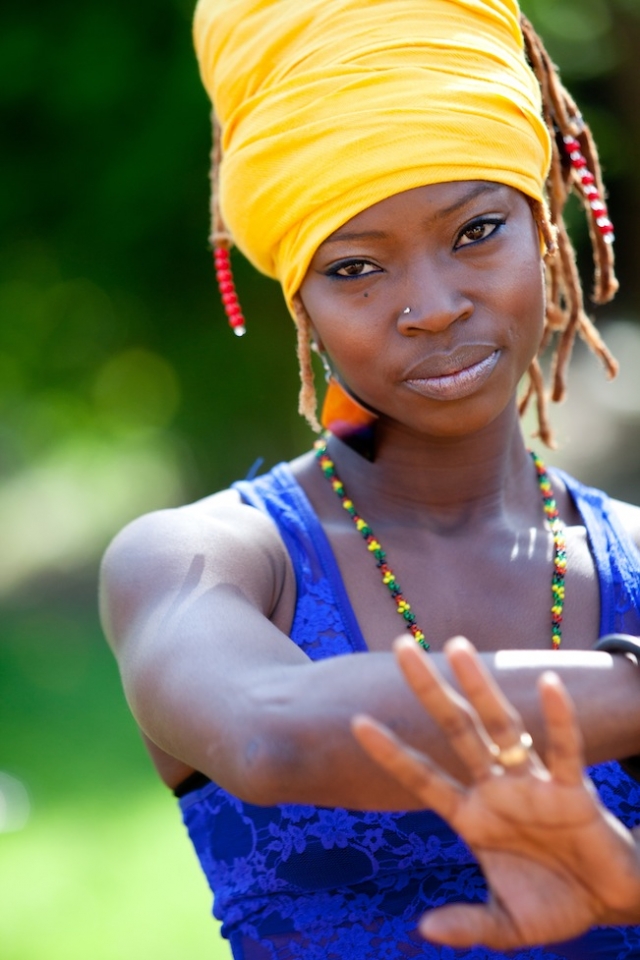 Your songs address social and political issues. What issues are you the most passionate about? Why?
DG: I usually sing about issues that affect myself first, and I always have a message of peace, forgiveness, and tolerance. It’s also important for me to speak about the situation of the women in Africa and around the world. Women give so much to the world and I don’t think they are appreciated or valued as much as they should be. Instead, they are too often marginalized and set aside. As a woman, when I see other women suffering, I am affected. As an artist, I use my music to empower and defend those without voices and commit to speaking out on social issues.

How has your music changed since you first debuted in America?
DG: My first North American tour was in 2007 with the Acoustic Africa project. It was a great experience for me and I learned a lot from Habib Koite and Vusi Malhasela, two well-known African voices. While I still always use a mix of different African rhythms, my music now is more personal with deep lyrics and catchier melodies. I also composed all of the songs on my most recent album.

Dobet Gnahoré will appear at the Ordway Center for the Performing Arts January 11. For more information and to purchase tickets, head to www.ordway.org.