5Q: Diary of a Wimpy Kid the Musical 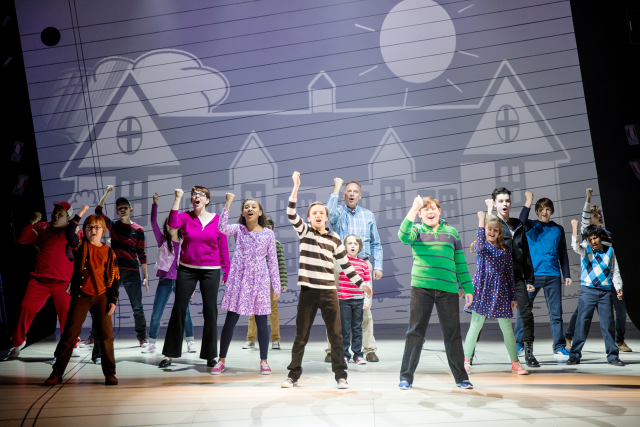 The Wimpy Kid series has grown immensely popular with kids and adults alike, with more than 165 million books in print and three film spinoffs that have cumulatively grossed $225 million. When you’ve become a balloon in the Thanksgiving Day Parade, you know you’ve made it, but now the franchise is expanding to the stage with the premiere of Diary of a Wimpy Kid the Musical at the Children’s Theatre Company. Wimpy Kid is likely to be the biggest production in the theater’s history: the capstone production of Children’s Theatre’s 50th anniversary season, and the last of five premieres, Wimpy Kid is backed by Broadway producer Kevin McCollum (Rent, In the Heights, Motown the Musical, and Something Rotten!) and Fox’s theatrical arm.

The new musical, based mostly on the first book in the series by Jeff Kinney, follows 12-year-old Greg Heffley as he tries to survive his first year of middle school. Greg cares deeply about social status and title and doesn’t care how he achieves either, which is where it all goes wrong. The story focuses on youngsters, but it is created to hit the sweet spot for families, and capture audiences who love the musicals You’re a Good Man, Charlie Brown and Annie.

Local actor Tod Petersen is making his CTC debut as Greg’s dad. He most recently played Herbie in Gypsy at Theater Latté Da, but has frequently played on the Theater Latté Da and Chanhassen Dinner Theatre stages as well as the Ordway Center for the Performing Arts, Illusion Theatre, and more.

We last saw you acting in Gypsy, which is quite different from this show, with around 20 child actors. What drew you to this project, which is so different from what we’ve seen you in recently?
Tod Petersen: Not to be flip, but what drew me to this project was that CTC offered it to me. Actors like to work! While Diary of a Wimpy Kid obviously has a very different tone and much less racy content than Gypsy, both stories are about growing up; maneuvering your way through childhood and adolescence; finding your way, your path, your “thing”; and figuring out who you are in the world. I am always drawn to stories of actualization and change. Also, like Herbie in Gypsy, I love kids. This is my third “kid” show in a row. The Sound of Music at the Ordway and Gypsy at Theater Latté Da both had about 10 kids in them, including understudies. So Wimpy Kid is double the fun!

Everyone talks about how horrible middle school is, and how no one wants to relive it. So what makes the story of Diary of a Wimpy Kid so popular, to the point of becoming a musical?
TP: The original book by Jeff Kinney is laugh-out-loud funny. I read it in the green room during the run of Gypsy and the kids, who had all read it, kept running over to see which part I was laughing at. I think Jeff Kinney struck a strong chord with his characterization of Greg Heffley, the titular Wimpy Kid. Yeah, he gets picked on at school, his family is weird and his friends are weirder, and while he’s very creative and a generally good-hearted kid he can also be pretty clueless and is always audaciously striving. Honestly, he can be kind of a dick sometimes. We get the full spectrum of humanity from Greg Heffley. He’s every kid. The good, the bad, the sad, the hilarious. 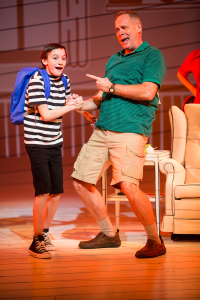 What is it like playing the dad of the bullied, “wimpy kid”? Does it stir up any emotions?
TP: Yes, emotions have been stirred. I was picked on in middle school, as many gay kids are. Called names, pushed around, not invited to the cool table. Or any table at all, for a while. It was definitely no fun, but I think my primary emotion today is one of gratitude. Because of my middle school experience of being an outsider, I leaned into my creative self; into art, writing, music, theater. I found self-expression. I found my talents, my humor, my “thing.” Being treated poorly at that age also planted seeds of kindness and compassion for others, and for that I can be nothing but grateful.

Jeff Kinney set out to write a book for adults and it ended up on the children’s best-seller list. Does that kind of cross-generation appeal make its way into the musical? What can audiences expect?
TP: Yes! This production is definitely not just for kids. Number one, again, it is hilarious. Reed Sigmund and China Brickey play a multitude of character roles (teachers, coaches, parents) all very colorful, kooky, and funny. Brandon Brooks and Keegan Robinson get to play, respectively, a wannabe punk rocker and a nicey-nice Bieber-type pop star. Both of these young, talented actors are given big numbers with a lot of big, fun technical spectacle. It’s a blast. And I think the mom and dad characters that Autumn Ness and I play will be completely relatable to the adults in our audience. One of the major themes of the show is that we never really leave middle school. We’re always trying to fit in, figure it all out, do the right thing.

The drawings Greg is always doodling will be projected on the stage, creating a set for the actors to operate in. What does that kind of technological base add to the show compared to a more typical set?
TP: The ever-present projections and animations very cleverly and entertainingly put the audience in the world of this kid who loves to draw and doodle. They put us right inside his Generation Z brain. They also set a bright, snappy pace for the show, with their ability to shift the scene in a flash of light. And there are some fun hydraulics happening, too, so Mom will pop up out of the floor while standing at the kitchen table to start a scene and Dad will drop out of the living room while sitting in his chair, drinking his coffee and we’re on to the next scene! It’s been really fun to put this show together and watch these technical elements develop. I think the CTC audiences are going to love it too.

Diary of a Wimpy Kid the Musical runs at the Children’s Theatre Company through June 5. For more information and to purchase tickets, head to www.childrenstheatre.org.