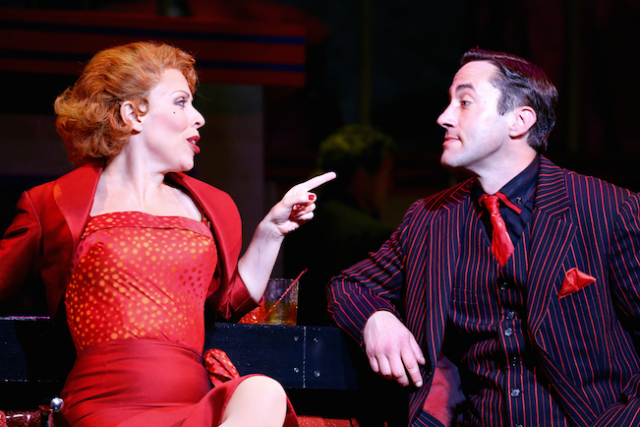 Damn Yankees is a musical comedy modern retelling of the Faust legend set during the 1950s in Washington, D.C., during a time when the New York Yankees dominated Major League Baseball. The musical is based on Wallop’s novel The Year the Yankees Lost the Pennant and tells the story of aging baseball fanatic Joe Boyd, who is transformed into a star slugger after he makes a deal with the Devil (literally) for the chance to lead his favorite team, the Washington Senators, to a pennant victory over the New York Yankees. Audiences will delight in seeing if he can get his team a win and still outsmart the Devil in time to win his soul back.

The Devil is disguised as slick salesman Mr. Applegate and portrayed humorously by Monte Wheeler. Monte played Frank ‘n Furter in the Ordway’s production of The Rocky Horror Show back in 2007, so it’s clear he is familiar with an over-the-top comedic role. 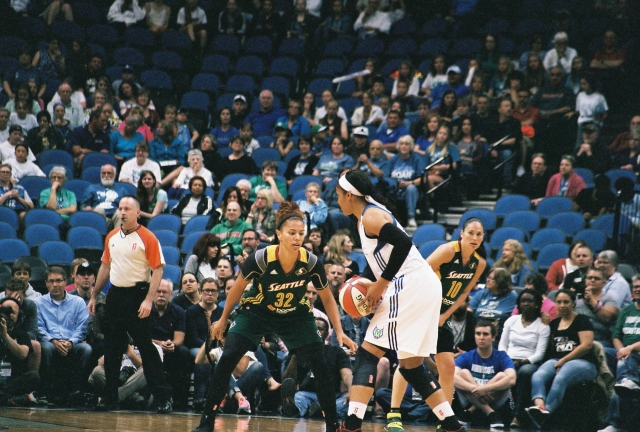 Tari Kelly as Lola and Monte Wheeler as Mr. Applegate in Damn Yankees

Playing the Devil must not come with many boundaries in terms of character. How do approach playing Applegate?
Monte Wheeler: Well, I feel that there is a lot of freedom in the role, and room for a variety of interpretations. It does give me the chance to explore my dark side, and there is a lot of comedic wiggle-room, which I love. But I do feel that there are boundaries. Applegate is the ultimate villain. He’s scary, but he’s also funny. And, he’s a classic vaudevillian. This is really a delightful, entertaining take on the Devil, and it’s important to honor the vision the authors had for the character when I play him.

How do you warm up or get into the character of Applegate?
MW: That’s a good question. I’m not sure. I don’t know what this says about me as a human being, but I find getting into character to play the Devil is pretty easy for me! I don’t usually warm up. I’m naturally warm-blooded. I think the Devil is warm-blooded, too, so, I guess it could be type-casting!

How do you keep Applegate fresh for audiences, but also yourself, as you play him night after night?
MW: The trick to keeping anything fresh is to always pay attention. Even if you do the same show for a year, each performance is different. Each audience has its own energy, and your relationship with them is unique with each performance — actors say their lines slightly differently, rhythms change, etcetera. With all the variables, and given that live theatre is a living, breathing thing, keeping things fresh isn’t all that difficult. It also helps that I absolutely LOVE playing the role, and I want to relish every second of it!

In 1995, Jerry Lewis became the highest paid performer in Broadway history for his role as the Devil in Damn Yankees. Why do you think that is? What does this role add to the world of Broadway shows?
MW: Well, that’s a pretty simple equation: Jerry Lewis is a star, and it’s a fabulous role. Anytime you put a star in a fabulous role, people will want to see it. It adds to the Broadway landscape for a lot of reasons. It shows us a Devil who is human, fallible, and funny. It gives us a character we love to hate, but ultimately, we can’t help but love. He represents the thing within us all that, while we pretend to hate it, wishes we could be completely naughty and get away with it! And, most importantly, Applegate’s character is built with a nod to vaudeville comedy, which is the root of so many things in the performing arts. Not just in musical theater. Vaudeville has influenced comedy in all media. The jokes, rhythm, and timing they developed back then still work, and are still funny today. And it’s such a joy to play a role that will always honor those roots!

Damn Yankees was ahead of its time in 1955 in one important aspect: it dared to have a female sportswriter, among other things. Any boundaries that it’s pushing today?
MW: I believe that sexism is still alive and well, unfortunately. And homophobia has its roots in sexism, in that it’s based on a belief that all men should act a certain way and all women should act a certain way. As far as “pushing boundaries” goes, in my opinion, it’s not that kind of show. It’s much more introspective than that. It is incredibly relevant today, in our youth and wealth obsessed culture, it’s important to question what is truly important. A man is older, he gets fame and wealth, and youth. He chooses to go back to his wife, his home. He beats the Devil. He has to pick what truly matters to him and he picks his true love. EVERYONE can relate to the struggle in that choice. Popularity, or true intimacy? It’s a heavier question today than it has ever been. And, pun intended, I’m having a HELL of a time doing it!

Damn Yankees runs at the Ordway Center for the Performing Arts through June 28. For more information and to purchase tickets, head to www.ordway.org.