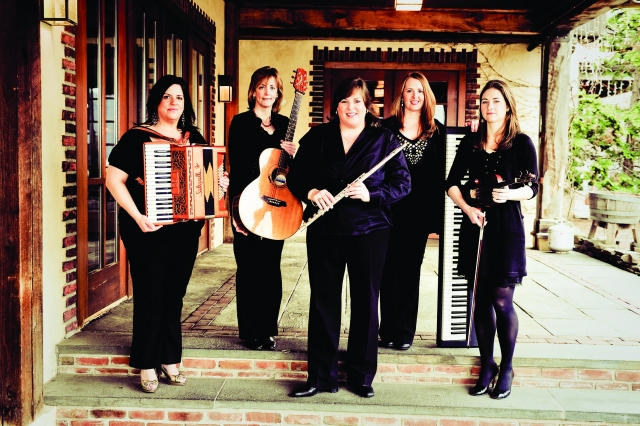 Rock the Ordway is a month-long celebration of the new 1100 seat state-of-the-art Concert Hall at the Ordway Center for the Performing Arts featuring local, national and internationally renowned artists. The Ordway calls it 22 Days of Opening Nights. With tickets as low as $10 and an unprecedented mix of eclectic artists and performances specifically chosen to shake things up — while also showing off the unrivaled acoustics and intimacy of the hall — there’s a Rock the Ordway show for everyone.

Coming up on St. Patrick’s Day is a performance by Cherish the Ladies. Hailed by The Boston Globe as “a leading group in the Irish traditional world,” the ensemble blends bravura musicianship, dynamic step dancing, and an inimitable stage presence to create an explosively entertaining experience. Celebrate St. Patrick’s Day with this Irish entertainment sensation. Joanie Madden is the award-winning whistle and flute player who has been the leader of Cherish the Ladies since its inception.

You’ve been with the group since its inception 30 years ago. How have you and the group grown?
Joanie Madden: Being a part of Cherish the Ladies since its inception has been an amazing and rewarding experience to be a part of! What started out as a one-off concert series has literally turned into my life’s work. To give you a little background, we got together as an idea by folklorist Dr. Mick Moloney who noticed a huge upsurge in female Irish musicians rising to the forefront in what had been a male-dominated scene for centuries. Mick thought it would be a great idea to do a concert series in New York City and asked me to help him organize and MC them.  We were all surprised when all the shows were sold out, followed by a recording on Shanachie Records called “Cherish the Ladies” that wound up being chosen by The Library of Congress as one of the best folk albums of the year, which led us to receive a grant from the National Endowment for the Arts to go on a two week tour. It’s simply unbelievable to think that we are still on the road 30 years later! We were a band of inexperienced musicians, and we now have grown to be considered one of the top Celtic music groups in the world, and have performed thousands of concerts, toured all over the world performing in the finest performing arts centers, been the guest soloists to over 300 nights of symphonies, and have recorded 15 albums.

How did you get started in music?
JM: My story is pretty much the same as the rest of the members of the group in that my father, Joe Madden, was an All-Ireland Champion on the accordion, emigrated from Ireland and wanted to pass on his love of music to his children. He was over the moon when I started showing interest in traditional music and began to play, although he never thought I would follow with making my career of it!

Why is it important for people to partake in Celtic music and culture on St. Patrick’s Day?
JM: Through immigration, every country in the world has made an impact and major contributions to the society and growth of America as a country. With over 34 million people in America claiming Irish heritage, the presence of Ireland in the USA has been significant from business, science, sport, and culture. I think it’s wonderful to pay homage to a country whose music became the backbone to so many of America’s musical traditions whether you are talking bluegrass, country, old timey, and folk music which all came down the river from the Irish and Scots that brought their music here. I think that is why we have so many fans from different ethnic backgrounds that love our music, because they can relate to it. The level of virtuosity between the music, the singers, and the stupendous dancing has people loving our culture around the globe.

What does the holiday mean to you?
JM: I get a great sense of pride around St. Patrick’s day. It is so rewarding to me to see the music I play and love being celebrated in the great music venues across the US. We are so honored to be the first Irish group to play the brand new renovated Ordway, and are thrilled that it’s going to be stuffed to the rafters while we christen it with its first Celtic notes.

What role does music play in the celebration?
JM: You can’t have a party without music and our visit to St. Paul is going to be fantastic. As we celebrate 30 years, I’m so proud of the group and all its accomplishments over the past three decades. I’m humbled to have an incredible line up in the band joining myself on flutes and whistles: guitarist Mary Coogan; All-Ireland Champion accordion player, Mirella Murray; Riverdance alumni Liz Knowles on fiddle; All-Britain piano player Kathleen Boyle; and two-time Grammy nominated singing legend Maura O’Connell. Dance is also a huge part of our show and thrillingly is going to be supplied by world champion step dancers Michael Holland, Garrett Coleman, and former Principal lead dancer Jason Oremus. We love that St. Paul has such a vibrant Irish arts community and we look forward to being joined by members of the community in music and dance.

Cherish the Ladies will appear at the Ordway Center for the Performing Arts March 17. For more information and to purchase tickets, head to www.ordway.org.