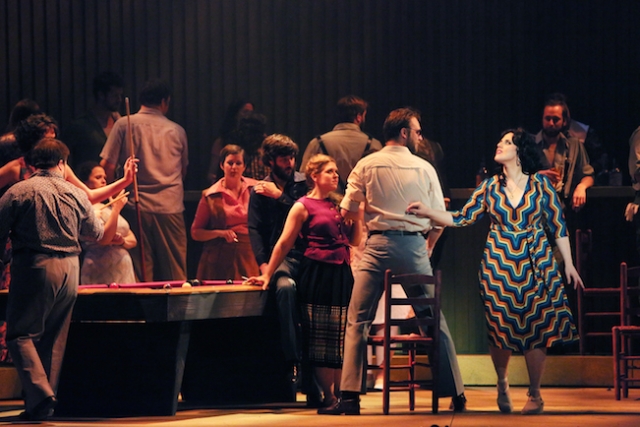 The music of Carmen is familiar to everyone; look up videos on YouTube and you immediately recognize the music, even if you didn’t know where it came from. Now immerse yourself in a restaging of the opera that created such memorable music, characters, and plot lines. Obsession turns deadly when the smoldering femme fatale, Carmen, seduces both a love-sick soldier and a swaggering toreador. Updated to be set during the 1970s (although still using Seville as a backdrop), Minnesota Opera takes Bizet’s tale to a whole new level.

Victoria Vargas takes on the role of Carmen for half of the performances during the show’s run. She returns to Minnesota Opera for the role, after having previously spent four seasons as a Resident Artist with the organization. She takes some time to answer questions about one of opera’s more demanding and evocative soprano roles.

Victoria Vargas (right) as Carmen in the Minnesota Opera production of Carmen.
Photo by Michal Daniel

Carmen is one of the most famous operas; everyone knows the music. What’s it like to bring such a notable character to the stage?
Victoria Vargas: Bringing Carmen to life is fun, challenging, extremely rewarding, and did I mention challenging? She is iconic not only for her music, but for her spirit. The opportunity to play her is tremendous.

Why are we so enraptured by Carmen and Don José’s story after all this time?
VV: I think her story is enrapturing for a few reasons. First of all, she is one of the first, if not the first feminist in opera. She believes in total freedom to be exactly who she wants to be and she uses her wit and femininity to get everyone to do exactly what she desires. The story is timeless because there are always women [like Carmen] who defy the rules of what being a “woman” in society looks like; just as there are men like Don José who think they can change women for the better. We also see in the news, time and time again, stories of men who lust after women, don’t get the reaction they desire, and lash out.

What does updating the setting to be during the ’70s do to the story? What does it add? Does it hinder the story in any way?
VV: I think the ’70s add a different layer to the story that actually works a bit in the opera’s favor. The smuggling of certain contraband (video tapes, pornography, etc.) was very big post-Franco [dictatorship] and there was the sexual revolution allowing people to be with who they wanted to be with and not be tied down by societal restrictions. Someone like Carmen would absolutely exist in this time period. I would say the only “hindrance” would perhaps be the audience’s initial reaction to what is not your typical flamenco-dancing Carmen. Keeping an open mind is key. 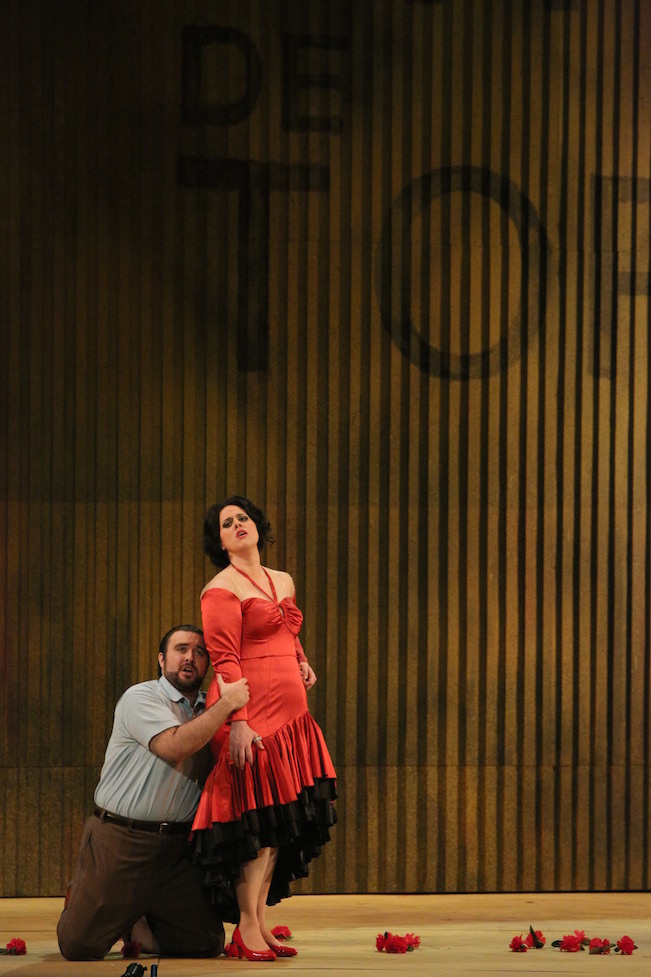 Cooper Nolan as Don José and Victoria Vargas as Carmen in the Minnesota Opera production of Carmen.
Photo by Michal Daniel

At times there is some same-sex attraction tension between Carmen and her friends Mercédès and Frasquita. In fact, the opera as a whole kind of celebrates overt sexuality, which is quite different from most other operas. What does a story like this add to the world of opera?
VV: I think that the overt sexuality in this opera gets the audience away from the idealistic vision of women in opera. Why do we cheer for Carmen? Because she is always herself. She is free to be exactly who she was meant to be. She uses her body because it’s a tool as a means to get what she wants. This is not often seen in the typical soprano heroines in opera.

What about the role of Carmen — what does she add to the world of opera? She’s not the typical “spotless soprano” heroine that opera-goers are used to seeing.
VV: Carmen brings a sense of revolution to the women of opera. I think she adds relevance to women in society today. She is strong, confident and not tied down by society. She does exactly as she pleases without apologies. She’s flawed and real and not put on some pedestal and I think this is why people love her and love this opera. It’s the same reason why so many people love reality television: because they want to see people they can relate to – real people who make mistakes, and fall for the wrong guy or girl, and suffer consequences for their actions. I think it’s extremely important that we see opera as stories of real people.

Carmen runs at the Ordway Center for Performing Arts through May 10. For more information and to purchase tickets, head to www.mnopera.org.