Based loosely on the play, Cyrano de Bergerac, Calvin Berger is the story of unrequited feelings, love notes, and physical insecurity among four high school seniors. Calvin is smitten by the beautiful Rosanna, but the size of his nose prevents his declaration of love. Rosanna, in turn, is attracted to the handsome newcomer, Matt, who is painfully shy and inarticulate around her, although the attraction is mutual. Hoping to get closer to Rosanna through his eloquent love notes, Calvin offers to be Matt’s “speech writer,” all the while ignoring signals from another girl, his best friend, Bret. When the deception unravels, everybody’s friendship is seriously jeopardized.

Calvin Berger‘s director, Joshua Campbell, is working with Minneapolis Musical Theatre for the first time. In the past, he’s directed such great productions as Deal!-The Musical at the Ritz Theater and The Shoe Tree Reading with Theater Latté Da and various cabarets, concerts and high schools. He’s also got a few Guthrie Theater and Children’s Theatre Company credits under his belt. As an actor, he participated in the first national tour of Legally Blonde and Mamma Mia! in Las Vegas, among many other shows around the U.S. He has worked locally at venues including the Guthrie, Jungle, Theater Latté Da, Park Square, Old Log, Ordway and Children’s Theatre. 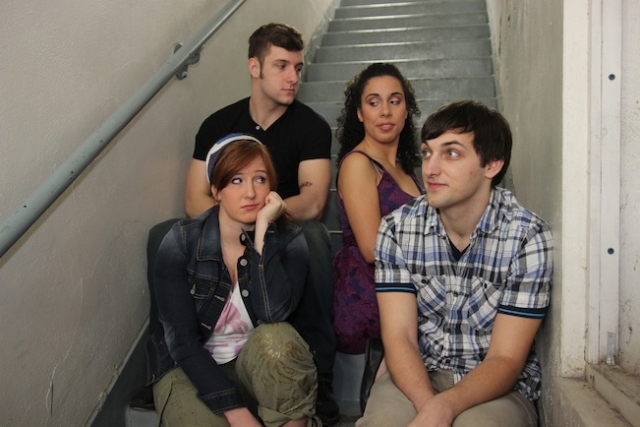 In your director’s note, you mentioned how everyone has unfounded insecurities. Can you tell me more about what you mean by that?
JC: In the original Cyrano de Bergerac, the title character actually has a big nose. In our modern adaption, the high schooler, Calvin, THINKS he has a big nose. I love that change in the adaption. We all look in the mirror and see inadequacies that aren’t there. I’m too tall/short/dumb/fat. I hate my moles/ cheeks/ hair/ eyes/ personality. Society, generally, does not judge us as harsh as we judge ourselves. Each of the four characters in this show have parts of their person that they loathe. We watch their journey to acceptance. We all need to be less critical.Being derived from the classic Cyrano de Bergerac, the themes are still relevant. Why do you think that is? What makes it so timeless?
JC: Isn’t it amazing that pieces of Shakespeare, Dickens, Brontë and other writers from bygone eras continually get adapted and produced? When thoughts and themes are timeless, they stick! Cyrano, among many other lessons, teaches us about expressions of love. How do you express your love? What turns you on about how others express their love? Could you be more open to hearing love from unexpected people in unexpected ways?
Composers ranging from America’s Victor Herbert in 1899 to Holland’s Ad Van Dijk (whose Broadway version eked out 175 showings in 1993) have attempted — and failed — to create a successful Cyrano musical. Why does this one work?
JC: This is a loose adaption. I think that is the key to it’s success. You will not see swords and swashbuckling in this version. Barry Wyner, the writer, takes the familiar set up and then goes in his own direction. Think Taming of the Shrew becoming 10 Things I Hate About You or Jane Austen’s Emma becoming Clueless.  Classics moving into modern day high schools are the way to go!With the addition of music and other changes, is it recognizable to the original story? What about the classic story shines through?
JC: In addition to Cyrano de Bergerac becoming Calvin Berger (get it? CB/CB) we have the love interest Rosanna. Cyrano’s male best friend, Le Bret, has become Calvin’s best friend/woman who pines for Calvin, Bret. The plot and conclusion of Cyrano has been changed for Calvin Berger — no one dies! Woo! We have added little hints through set and props at the original text and Romantic Era of theatre. See if you can spot the morsels! The classic story shines through mainly with Calvin. Witty, fun, smart, and not known as the most attractive. Calvin has a lot of similar traits as Cyrano.

Set in a high school, what makes this show appeal to a wide audience of adults as well as teens?
JC: I don’t know about you, but I definitely still have insecurities. I think we can look at these high school characters and say, “Ah, youth!” But we all still question ourselves. Maybe our self doubting has moved beyond zits and crushes, but it’s still very much alive. “She has a better job than me.” “His boyfriend is cuter than my boyfriend.” We are not perfect people. This show helps us embrace that!

Calvin Berger runs at the New Century Theatre January 23 through February 15. For more information and to purchase tickets, head to www.hennepintheatretrust.org.