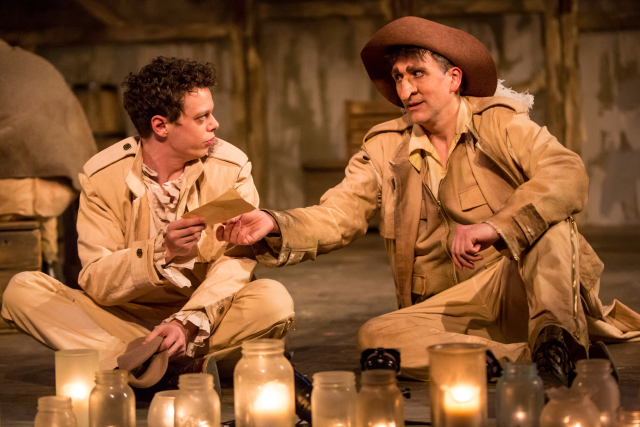 Theater Latté Da concludes its mainstage season with the world premiere of the new musical C. Inspired by Edmond Rostand’s beloved play Cyrano de Bergerac, C. is also the second world premiere in Theater Latté Da’s major new work initiative. NEXT 20/20 is a five-year endeavor aimed at developing 20 new musicals or plays-with-music and shepherding many of them to full production.

With book and lyrics by Bradley Greenwald, C. centers around Cyrano: a brash, strong-willed man of many talents. He’s a remarkable poet and a consummate musician who is deeply in love with the beautiful and intellectual Roxane. However, he is plagued with persisting self-doubt because of his extremely prominent nose. Bradley Greenwald and Robert Elhai’s new musical adaptation of Edmond Rostand’s great play, Cyrano de Bergerac, reminds us of the power of language and gives new voice to one of its greatest champions.

David Darrow plays the young nobleman, Christian. Perhaps the opposite of Cyrano, Christian is a handsome nobleman who falls in love with Roxane. Darrow was recently seen as the omnipresent, mysterious Craig in Theater Latté Da’s most recent world premiere, Lullaby, and as the Baker in last season’s Into the Woods.

What is it like working on a new musical, compared to revisiting an existing musical? Do you have a preference?
David Darrow: I love working on new musicals. And while I love performing in great, well-known shows, I do prefer new work. Because there’s no precedent for the role you’re playing. You often feel more connected to the character. I think an actor’s work is more personal in new plays and musicals because you can’t go on YouTube and see how someone else did it. It’s all you. I also love getting new pages and seeing the work develop. You feel connected to the piece because it changes based on suggestions you have, or things that are discovered while you’re in the room. It’s a very rewarding process.

Cyrano de Bergerac is a classic and well-known. How does this new musical breathe new life into that story?
DD: I think Bradley Greenwald’s book is really a work of genius, and I’m not sure audiences realize how much of it is his rather than Rostand’s. Edmond Rostand’s play can often feel like a one-man show, with Cyrano being the only character who is a fully-realized person. But Bradley’s script does such an amazing job at humanizing the other characters, in particular Roxane and Christian, that the love triangle seems, in my opinion, more complicated and realistic than it does in the original play.

Bob (Elhai)’s music takes its cues from the original play in that Rostand mentions music in every act. Bob used the music that Rostand mentions to create the score that the characters improvise to. The result is a really organic musical experience that feels different from any musical I’ve ever heard. The music is already in the room, and it is up to the characters to put words to it.

The role of Christian has taken different forms in various adaptations. How does Christian play into Theater Latté Da’s version?
DD: Christian is often portrayed, in productions of the original play as well as adaptations, as a sort of dumb, beefcake character. But Bradley’s script makes it clear that in this version, while Christian is inarticulate, he isn’t stupid. He just doesn’t speak the way Cyrano and Roxane do. He doesn’t know where to find his poetry, which is ultimately his tragedy. Bradley wrote a really beautiful scene near the end of the play in which Christian confronts Cyrano and basically accuses him of trying to replace real human connection with words. This scene isn’t in the Rostand play, but in our version, is at the heart of Christian’s relationship with Cyrano.

How does working directly with the person who wrote the book and lyrics for this show, Bradley Greenwald, help you interpret your character?
DD: Bradley has had such a clear vision from the beginning of this process what this play is about. He’s great at playing, and allowing things to grow organically over the course of several weeks, but he also knows the work and what the story is that we’re trying to tell. Like all good writers, Bradley knows why everything is in the script, so when we had a question, either there was a clear answer or there was a rewrite coming, which is really comforting for actors, especially in new work.

What can audiences expect with this version of Cyrano?
DD: I was shocked by how funny the show is. Most of the show is a romantic comedy, and you forget that about the original play. There are also lovely anachronisms scattered throughout the script that really make it feel accessible. It’s a lush, beautiful new musical with a ton to laugh at, and just the right amount of self-awareness.

C. runs at the Ritz Theater through May 1. For more information and to purchase tickets, head to www.theaterlatteda.com.