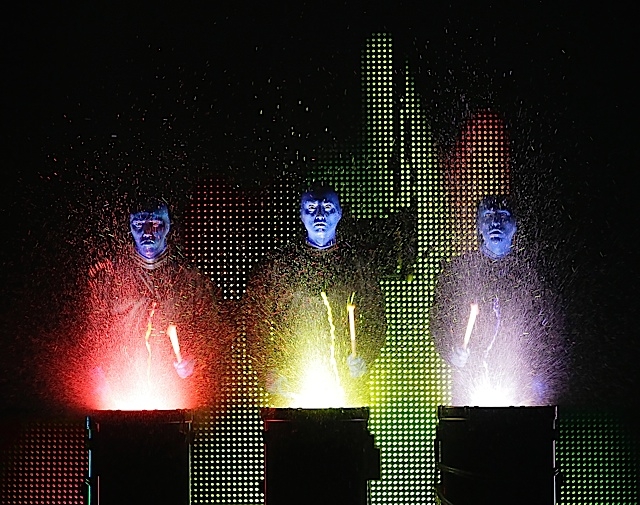 Blue Man Group is comedy, theater, rock concert and dance party all rolled into one. This wildly popular phenomenon delivers an unforgettable multi-sensory experience. The groups motto, “Dare to live in full color,” definitely applies. Audiences have been captivated by the mysterious blue men as they dazzle and captivate. Created in 1991, Blue Man Group grew out of a collaboration between three close friends, Chris Wink, Matt Goldman and Phil Stanton, on Manhattan’s Lower East Side.

Since it’s inception, the group’s membership has drifted away from the founding members, but the audience’s love for the group has never waned. Meridian has performed Blue Man Group in Boston, Las Vegas, New York, Chicago, Sydney, and at sea aboard the Norwegian Cruise Ship EPIC. He holds a master’s degree in acting from the National Theatre Conservatory and is also a classical pianist.

The question everyone wants to know: why blue men? Is it to provide a level of anonymity?
Meridian: Like everything in the show, the anonymity is a tool to create connection. The Blue Man is a sort of everyman, some of the best parts of our humanity: our curiosity, our desire for connection. I think that because he is no one specific, everyone can connect to him, and through the experience of the show, each other.

Your look and sound has lent itself to many parodies over the years. Is imitation the sincerest form of flattery?
M: I believe so. So many people have connected with and enjoyed our show. We’ve all seen the fans who build their own PVC instruments, the blue men drumming at the beginning of The Simpsons. When you touch so many lives, some are bound to express that through imitation.

What in your background lead you to audition and become part of the group? What was that audition process like?
M: In addition to being a classical pianist, I have achieved my masters in acting. Music and theatrical performance together in one show? Yes, please. The audition process is quite challenging and quite fun, like the show itself. It is a process of stripping away the outer layers of oneself to see what kind of Blue Man might be hiding underneath. If you can do that, you’ve got a chance.

What is the benefit of having a rotating cast of blue men instead of just the original three?
M: There are constantly new ideas and personalities infusing the character with life. Each performer brings a unique take on it and a unique perspective that blends with each other unique perspective and the show feels very different with each cast.

After becoming a blue man, did your fascination for the magic of the group dissipate, or did you get a greater appreciation?
M: It’s two different perspectives, isn’t it? The magic of being an audience member is to be drawn into this world and to experience, despite oneself in some cases I think, a breaking down of social masks to be connected with everyone in the theater by the end of the show. To be in the group is to be part of creating that magic. It is complicated and deep at times and is always an ever-changing quest to caretake that magic. I appreciate it in a very different and I think more profound way now.

Blue Man Group runs at the Orpheum Theatre December 18–20. For more information and to purchase tickets, head to www.hennepintheatretrust.org.