Bloody Bloody Andrew Jackson audaciously redefines America’s seventh president, the populist who invented the Democratic party and doubled the size of our nation, resulting in the “Trail of Tears” and countless Native American deaths. Andrew Jackson was America’s first political maverick–Jackson defeated the British, Spaniards, and took land from the Native Americans. Who cares if he didn’t have permission? This musical re-creates and re-invents the life of “Old Hickory,” from his humble beginnings on the Tennessee frontier to his days as Commander in Chief. It also asks the question, “Is wanting to have a beer with someone reason enough to elect him? What if he’s really, really hot?”

With a book by Alex Timbers and music and lyrics by Michael Friedman, Bloody Bloody Andrew Jackson opened on Broadway in 2010 and was nominated for two Tony Awards. Steven Meerdink, the show’s director for Minneapolis Musical Theater, took the time to answer some questions about MMT’s latest production (and Meerdink’s last with the theater company).

What drew you to the show? What made you want to direct Bloody Bloody Andrew Jackson?
I think the overall theme for me was the fact that the politics of the time period are still relevant to today. He was our first populous president and we have a populous president now with Obama. And people don’t seem to know an awful lot about politics, but just kind of voting on how they feel about the candidate and not how the candidates stand on issues.

So, then you agree with critics when they say that the political satire of Andrew Jackson isn’t isolated, that it is also a commentary of today’s political landscape.
Yes. I think that’s the biggest thing. But also, for MMT’s mission to bring rarely performed works to the Twin Cities, those two pieces were really the defining factors for bringing the show here.

Opening night was met with protesters concerned with the depictions of Native Americans. You include a note after the performance about the horrible genocide of the Native people and the inaccuracy of the historical aspects of the show. Aside from that, what is your response to these criticisms?
I think the issue we had is that the protest came from the New York production, not ours. We worked hard to level the playing field so that it was not so heavily weighted toward Jackson being a hero. In fact, we may have gone quite a bit the other direction, trying to make it more even keeled, even the playing field in that respect. 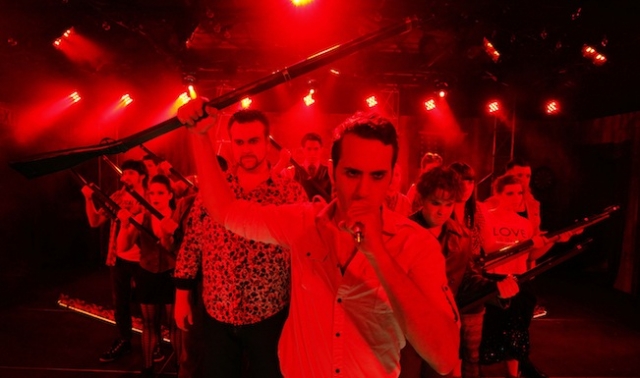 With that in mind, were any changes made to the script or to how you approached the show, knowing the controversial nature?
The changes…I prefer to think of them as modifications. When you get the script it has the original New York stage directions written in. We avoided that and did it our own way. For example, there are directions on how to dress the Native American characters or interpretations for the songs that we just didn’t agree with and were overtly racist. So we changed them.

You’ve said that this is your last show with MMT, a company you co-founded more than 20 years ago. That’s gotta be bittersweet, tell me about your decision to leave the company.
When I originally made the decision, my husband had a job offer in California, so we were planning to move. That has since fallen apart, so we aren’t moving, but I’m still leaving MMT, so I won’t be the artistic director. You know, I’ve been there for a while and it’s time for someone else’s vision to be seen and yeah, it is bittersweet. It’s been a great run, but it’ll be great to see MMT from a different viewpoint. For me, it’ll be a whole different scenario moving forward.

Bloody Bloody Andrew Jackson runs at the New Century Theatre until June 29. For more information and to purchase tickets, head to www.hennepintheatretrust.org.