The Minnesota Opera kicked off its 2015–2016 season with Richard Strauss’ Ariadne auf Naxos, the company’s first production of this meltingly beautiful — yet hilarious — work since 1987. When the wealthiest man in town double-books a group of pretentious opera singers and a band of bawdy comedians as dinner entertainment at his chic loft, something’s gotta give. The Prima Donna and her fellow singers, who’d planned to perform their serious opera (based on the legend of Ariadne), must now include the saucy comedy troupe’s antics in order to finish the show in time for the evening’s fireworks display. Richard Strauss managed to create an all-out comic and achingly tender performance.

Acclaimed soprano Amber Wagner makes her long-awaited Minnesota Opera debut as Ariadne, one of her signature roles. A winner of the 2007 Metropolitan Opera National Council Auditions Grand Finals and chosen by Opera News as one of 25 artists believed “to break out and become major forces in the field in the coming decade,” Wagner has been a resident artist at the Chicago Lyric Opera and a frequent performer at the Met. 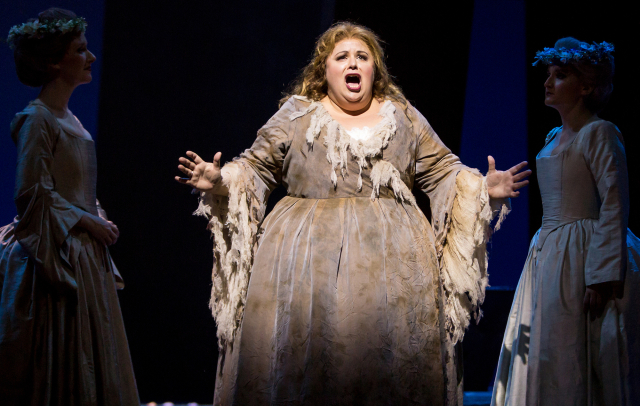 How did Ariadne become one of your signature roles? Do you ever get tired of playing her?
Amber Wagner: Funny story. Back in 2011, I accepted a contract to cover (understudy) my first ever Ariadne with Canadian Opera Company. It was the best way to learn the role and get to study the role while watching someone else sing the role. But that wasn’t exactly how it all went. The Ariadne in that production fell ill, so I did the final dress rehearsal and opening night of the show! It was exciting and exhilarating, but I thought for sure that would be it for a while, until I gained more experience with Strauss and such…NOPE! I was the contracted cover for Lyric Opera of Chicago’s Ariadne in the fall of 2011 and after Debra Voigt withdrew, I sang Ariadne for the full run. That was huge for me. And then, literally, right after we closed that run, I flew to Spain and jumped in for a cancellation in Valencia singing — you guessed it — Ariadne! So this role has more or less become a signature part for me through sheer happenstance. She (Ariadne) was very tough to learn and I feel I’m still in that overall process with her. The more I grow as an artist, the more I am able to bring to this music. It’s so stylistically specific and the text is so colorful (and often very wordy), so I feel I’m constantly trying to improve her when I get the chance to sing her. I can say that I don’t get tired of playing her. Now I find more depth to her character and what I can add and bring to the role, based on my own experiences in life, in motherhood, and, frankly, in this industry. She’s a real treat to play and I consider it a privilege to be a part of this show.

As a signature role, how does your portrayal change from production to production?
AW: I haven’t sung her since 2011, so a span of time has gone by and lots of life has happened for me. So for this show, I wanted to bring my “growth” into it; I wanted to push myself to really get detailed with the music, text and character. What brings her to such despair in the first part of the opera? How can I draw on my own life experiences to hopefully convey her deep sense of loss and longing for love and death to the audience? The other thing that has changed for me is my understanding of my youth. I know I am on the younger side of artists singing this and I want to make sure I open myself up to instruction, ideas, and opinions. All those things build a better artist. I want to gather all I can from the cluster of wise minds, so that we can really make this character authentic and believable for the audience.

Ariadne is a very demanding role, with light, lyrical moments and then this very deep register. Is that part of what attracts you to the role?
AW: I love the variety of her music. Strauss is genius, and it’s pretty amazing getting to lend my instrument to this music! I love the opera duet when Bacchus comes in; it’s so gorgeous and so challenging and I think that is really what attracts me the most. It has several different musical shifts, and in 20 minutes it feeds every desire a singer could have: lyrical, full-out singing, chatty text, sweeping lines — it’s magnificent.

This is probably one of the only operas I’ve seen described as using slapstick comedy. What impact does that add to a comedic opera?
AW: Oh, this  absolutely has its moments of slapstick comedy! The Prologue is so clever in that way. It’s all the more hilarious that the Composer is literally having a heart attack over not being taken seriously while we see all this nonsense going on in the background. It’s busy and a TON of fun. We have an amazing cast of actors who really just keep building on funny moments and making them even more ridiculous. The impact is for the audience — we want them to engage and laugh with us, so really playing up those moments and facial gestures is priceless. In the second act, when the opera rolls around, it’s pretty funny watching the comedians slip in and out while Ariadne is trying desperately to wither away. It’s so brilliant the way Strauss made fun of typical opera plots.

The “opera-within-an-opera” could provide comedy gold or could confuse an audience. How would you describe that balance in this production?
AW: It’s definitely comedy gold. We’re on stage poking fun at how serious opera and the singers can be at times. And if we can’t all laugh at ourselves, we just might need to find a new job, right?

Ariadne auf Naxos runs at the Ordway Center for Performing Arts through October 4. For more information and to purchase tickets, head to www.mnopera.org.