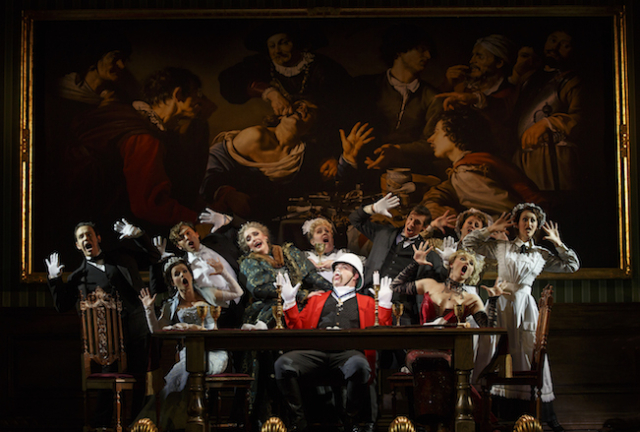 The cast with John Rapson as Lord Adalbert D’Ysquith (red) in a scene from “A Gentleman’s Guide to Love & Murder.” Photo by Joan Marcus

Coming direct from New York, the 2014 Tony-winningGentleman’s Guide tells the story of Monty Navarro, a distant heir to a family fortune who sets out to jump the line of succession by eliminating the eight pesky relatives (all played by one fearless man) who stand in his way. All the while, Monty has to juggle his mistress (she’s after more than just love), his fiancée (she’s his cousin but who’s keeping track?), and the constant threat of landing behind bars! Of course, it will all be worth it if he can slay his way to his inheritance…and be done in time for tea.

Matt Leisy is a British-American actor who’s appeared in film, television, and theater. Leisy joins the cast as the understudy for Monty Navarro (the guy who’s trying to murder everyone) as plays as Tom Copley, a country farmer who is furious with Henry D’Ysquith for buying up his land. He is ready to fight down-home and dirty.

The cast with John Rapson as Lord Adalbert D’Ysquith (red) in a scene from A Gentleman’s Guide to Love & Murder.
Photo by Joan Marcus

What helped you prepare for your roles in Gentleman’s Guide?
Matt Leisy: I think A Gentleman’s Guide to Love & Murder is the perfect amalgamation of my skills. I’ve spent at least half of my career playing Brits (I’m half-British and grew up in England), I studied opera in college (this show requires serious vocal chops), and one of the last roles I played last season was Richard Hannay in The 39 Steps. Stylistically, that play is very much in the same vein as Gentleman’s Guide. As is Oscar Wilde. I played Algernon in The Importance of Being Earnest recently, so I felt very much at home once we started rehearsals.

Dealing with love and murder, among other topics, what does this musical reveal about human nature?
ML: This musical deals with the complexities of love and social status. I don’t want to give too much away, but Monty Navarro has always been in love with Sibella, but she has her sights set on marrying well and moving up the social ladder. Monty doesn’t fit the bill. He hasn’t got much going for him, nor any prospects, but when he finds out that he was born a D’Ysquith, a prominent family with a castle and titles, he realizes that it’s possible to make something of himself and become Earl of Highhurst. There are just eight D’Ysquiths who stand in the way. So, in a way, we see what a man on a mission can accomplish, a variation on the “American Dream.” Monty also meets another lady along the way, which complicates his feelings toward the recently married Sibella, who has marital doubts and continues to remain in Monty’s life — a love triangle, to say the least.

This is a very physical show (in terms of a lot happening on stage and in the show). Is that something you enjoy? What challenges does that present?
ML: I love doing a physically demanding show. Once it starts, it just goes and you jump on and off the train as the musical dictates. It’s an added bonus to get your workout in at the theater! One thing about the physical comedy is that it’s all about precision and timing. Different audiences and cities respond differently, so we are constantly fine tuning our performances, something that keeps the show fresh over time.

Your résumé doesn’t involve a lot of traveling on tour. What challenges or rewards does being on tour present to you as an actor?
ML: I toured Asia for six months with The Sound of Music right out of college and have done countless regional productions, so I’m no stranger to traveling for work, but I have never done a run of a show this long on the road. Outside of the show, it’s been an amazing excuse to see friends and family in each stop and to explore cities I wouldn’t necessarily get to see. We’ve been with the show for about five months at this point. One would think that it would start to get a little tedious, but since I am understudying Monty Navarro, I soak in as much information as I can in between scenes and in rehearsal. It is definitely a challenge to be ready to go on with a moment’s notice and give a nuanced, star performance when you have never played the role in front of a paying audience, but it is a challenge that I gladly accept and I look forward to my first performance. What also keeps the show fresh is when we have swings and understudies go on. It often feels like opening night again because we are all rooting for that person and share his/her jitters.

Are there any challenges or joys to traveling in a show that is still considered “new,” being only a couple years old on Broadway and without a legacy to try to live up to?
ML: I think a challenge with Gentleman’s Guide is that it is not a known entity. People know that the show won several Tony Awards, including Best Musical, but that is about it; they don’t know what to expect. That is a blessing and a challenge. We have to work a little harder in the beginning of the show to get the audience on board and set the tone, but we also get to see them be delightfully surprised with the funny murders and comedy. We always seem to exceed their expectations by the end, something that might not be possible with a show everyone knows so well.

A Gentleman’s Guide to Love & Murder runs at the State Theatre through January 10. For more information and to purchase tickets, head to www.hennepintheatretrust.org.