5Q: A Christmas Story the Musical

Ralphie Parker’s one Christmas wish is pretty simple – he wants a BB gun. And he’s going to make sure he gets it! His parents are not so keen on the idea, afraid that “You’ll shoot your eye out!” But Ralphie is nothing but determined, and he’s got a few tricks up his sleeve to make sure his dream comes true! Some of the obstacles lying in his way include the neighbor’s dogs, his annoying younger brother and an unfortunate slip of the tongue that results in some literal soap in the mouth.

A Christmas Story is based on the beloved 1983 movie, directed by Bob Clark, which has become a perennial holiday classic. Adapted faithfully for the stage by Joseph Robinette, the funny and witty songs are provided by the songwriting duo of Benj Pasek and Justin Paul, whose compositions figured prominently on the NBC show Smash. Sure to appeal to the entire family, this musical is a whimsical, nostalgic portrait of 1940s America and a stone-cold holiday classic. Why watch it on TV when you can see it live? The original Broadway production of A Christmas story debuted in 2012 and was nominated for three Tony Awards. Now its Saint Paul’s turn to experience the magic (and amusement!) with this local production, staring Erin Schwab as Miss Shields, Ralphie’s teacher.

As the only holiday show to receive a “Best Musical” Tony nomination, what makes this story so special and timeless?
ES: I think the reason people connect with this story the way they do is the people in the story are real and familiar. We either know this family or we are this family. Every kid has really wanted that one gift more than anything else. The holiday dinner has been ruined, the tire has been flat, we heard our parents use a string of curse words we didn’t understand and at some point that “f— word” came out of our mouths and we couldn’t take it back. We all had those friends who egged us on but were also fiercely protective. We all had that one teacher that lives in infamy because she was scary, but for some reason she was your favorite. We love these people because they have become our family and watching the movie each year has become a tradition with our own friends and family. It is a rite of passage to show it to the kids and so much fun to watch it with them and remember our first time seeing Flick stick his tongue on that pole and laughing together. It is sweet and honest. They love each other.

The movie will undoubtedly be on TV nonstop during Christmas, so what makes this version different from the classic movie?
ES: Well, mainly the music. The film is not a musical but lends itself beautifully to being just that. There are so many moments of grand imagination and fantasy in the film and those are a lot of the moments where Pasek and Paul found wonderful musical numbers. There are also sweet tender songs sung by the mother and the kids. I once had a theater director tell me, “You don’t sing in a musical because it says to in the script or because the music magically starts playing. You sing because you have no other way to communicate what you need to or what you feel. It has gone past talking. It has to be sung.” Also, holiday movies or stories being turned into musicals makes sense. Don’t we all have a favorite holiday song? Or our own soundtrack for the holidays? We hear music everywhere during the holidays. Why not a musical?

It’s been said by the musical’s creators that A Christmas Story lends itself to the musical treatment, with the styles of the film veering from a kind of gritty realism to overt theatricality. What’s your take on that?
ES: The gritty realism is still in the musical. The story is exactly the same. So are the characters. And I believe the film is FULL of overt theatricality. Every scene that takes place in Ralphie’s mind is full of that. Going to see Santa is like that in the film as well. We all remember these places and moments much more grand than they really were. I remember going back to what we called “the big” sledding hill when I was young and looked at it as an adult and thought how small it looked. But my five year old daughter thought it was massive and amazing.

Erin Schwab as Miss Shields and Jake Goodman as Ralphie in A Christmas Story, the Musical.
Photo by Christian Brown

As Ralphie’s teacher, Miss Shields, the role doesn’t get that much fanfare in the film. But in the musical, you have a big dance number and the role becomes much more demanding. What else about your role or the show is more dynamic than the film version?
ES: Certainly, the writers really liked Miss Shields’ character in the film because I get to sing the brilliant song “You’ll Shoot Your Eye Out” in the show. That is one of the phrases you hear most in the film. It is SO fun. I think also when you are a kid you never think of your teachers as real people. I know many elementary school teachers and they are asked the craziest questions by their students like “Do you ever go to the bathroom?” or “Do you sleep here?”  I think that is why she is a bit larger than life and dynamic in this musical. I also think of her less as an older single spinster teacher and more of a mature single gal who is still looking for love. She also has a thing for red lipstick and firemen. 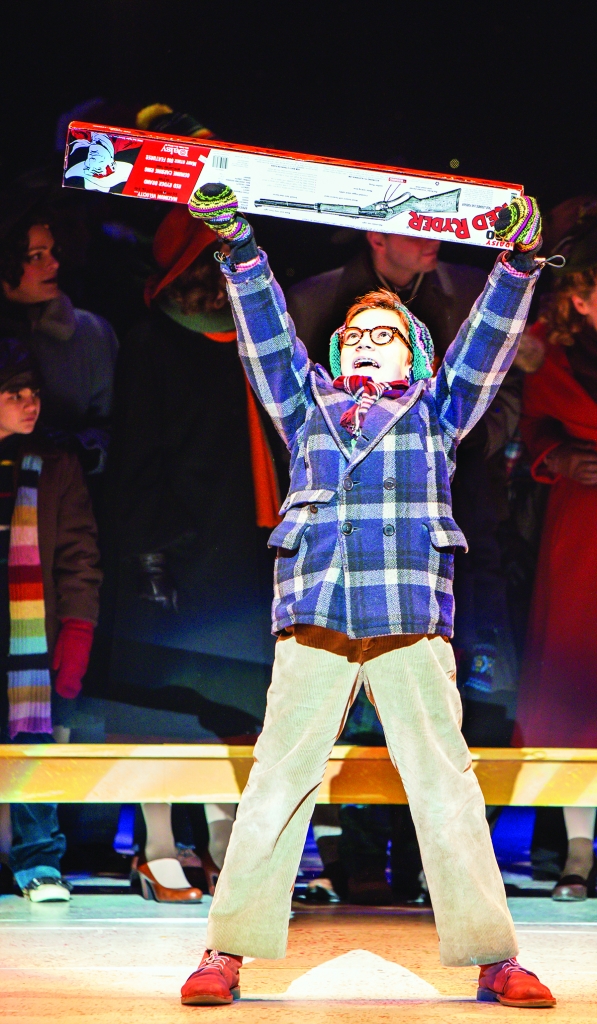 Jake Goodman as Ralphie in A Christmas Story, the Musical.
Photo by Christian Brown

Ralphie wanted that official Red Ryder, carbine action, two-hundred shot range model air rifle and was determined to stop at nothing to get it. What gift did you want as a kid, and did you get it?
ES: There was a doll I wanted when I was in about first or second grade called a Mandy Doll. It was literally all I wanted for Christmas. It was made by Fisher Price and you could do her hair and she had clothes you could buy. The day before Christmas, my folks sat me down and told me they could not find one anywhere and I told them Santa makes the toys so I knew I would get one. They said they had spoken with Santa and they could not make any more. I said he was magic and he would bring it to me. Sure enough, Christmas morning the doll was there and the magic of Santa and his elves and Christmas miracles was secured in my head and heart for years. I still have that doll.

A Christmas Story the Musical runs at the Ordway Center for the Performing Arts through December 28. For more information and to purchase tickets, head to www.ordway.org.