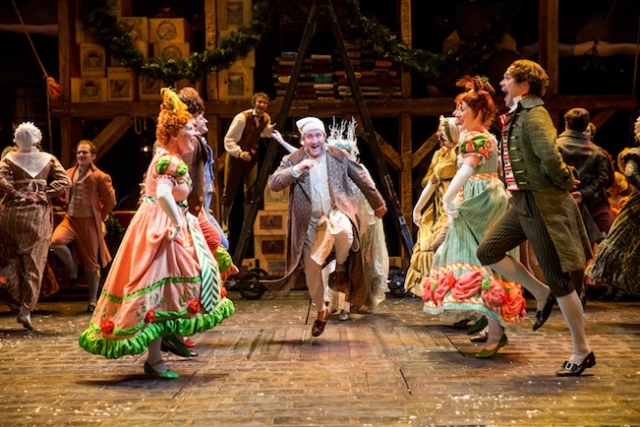 J.C. Cutler (center) as Ebenezer Scrooge with members of the cast of the Guthrie Theater's 41st annual production of the Charles Dickens classic, A Christmas Carol. Photo by Dan Norman.

There are countless renditions of Dickens’ Christmas classic, but nobody does it like the Guthrie. After 41 years, the theater has perfected the tradition of A Christmas Carol. A miserly and miserable man, Ebenezer Scrooge greets each Christmas with a “bah humbug,” until he is visited one Christmas Eve by the Ghosts of Christmas Past, Present and Future. Through a restless night, the spirits show him happy memories from his past, cruel realities from the present and the grim future should he continue his cantankerous ways.

This year, Joe Chvala steps up to the plate as the show’s director. Chvala has scaled the heights of the Twin Cities performing arts scene. He navigates the experimental and the mainstream with joyous assurance as both a choreographer and as a director. He’s been behind the Guthrie’s production of Carol a few times previously, and each time he finds something new in the story to highlight. Which means, each year, the Guthrie changes it up making each annual family trip a new and exciting experience. 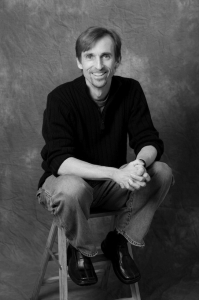 As someone who is (relatively) new to directing the show at the Guthrie, does that help you bring a fresh eye to a show that has been an annual event for over 40 years?
Joe Chvala: I saw A Christmas Carol at the Guthrie only once in the early 90’s before I started working on it five years ago. I had also encountered many other versions over the years and I love this story and Charles Dickens and the Guthrie and I never get tired of any of those things so it is pretty easy for me to look on it with fresh eyes. I remember that I enjoyed the Guthrie production I saw many years ago but that is about all I remember. I think the way to see it with fresh eyes every year is to focus on the power of the story and the ideas and concentrate on how Scrooge’s transformation is served by everything that happens around him. I like to keep an eye out for the big picture and the small moments that add up to the overall feel. I try to emphasize what adds to the story and shine a light on the ideas contained in that. I concentrate on how to keep all the episodes in a structure and a pace that reveals the transformation of Ebenezer Scrooge in the most clear, dramatic and satisfying way.

How has your experience as a choreographer worked its way into Christmas Carol?
JC: There are 47 people in this production of A Christmas Carol. The only way to stage the show even if there were no dancing in it at all would be with a choreographic eye. The first five minute scene is probably the most complex piece of choreography in the whole show and yet there is very little dance and very little text, it is storytelling through movement. Throughout the show there are numerous transitions and group scenes that use this kind of complex and focused choreographed movement to reveal all the things we want the audience to take note of. In the scenes with the ghosts, the movement has to facilitate the shifting of focus from the ghost who is conjuring the scene to the action on stage, and then to Scrooge’s reaction and the effect the past event has on him. Everything we see, from the moment Scrooge makes his entrance to the final scene on Christmas morning, is a tiny hammer that incrementally cracks open his hard exterior; a flame that melts his frozen heart.

Why do you think A Christmas Carol has been running for so long? What keeps it fresh for audiences?
JC: First of all, it is a great story and loads of fun to see produced in such a spectacular way. But on top of that the show works on so many levels. In a very profound and symbolic way, it satisfies our need (especially in this cold northern climate) for a story about the metaphorical thawing of a man who personifies winter; cold harsh and unforgiving. The imagery in Dickens’s novella is very deliberately about the melting of Scrooge’s cold frozen personality. Winter solstice rituals were deeply ingrained in northern European culture long before Mr. Scrooge made his icy debut. I think at this time of year we long for things that help us to accept and embrace the winter by putting our hope and faith into the fact that under the snow lies a dormant life, and within the cycle of the seasons, the ice will eventually melt and bring us a beautiful spring. There is a deep seated yearning for transformation in this story, and the promise of life springing back from the coldest of places, whether it be in a landscape or in a human heart, is truly special. On a more social level, all of us have encountered elements of Scrooge in others, in ourselves and in the world at large. They are the obstacles we perceive as a life full of joy kindness and love. We all delight in the idea that these Scrooges may miraculously change; whether the shifts are specific and personal or more generally related to global issues of the relationship between greed, ignorance and fear and the existence of poverty and despair in the world. In this way A Christmas Carol has a very universal appeal that makes it a Christmas story but much more than just that.

J.C. Cutler (center) as Ebenezer Scrooge with members of the cast of the Guthrie Theater’s 41st annual production of the Charles Dickens classic, A Christmas Carol.
Photo by Dan Norman.

I’ve seen the show with varying levels of special effects. As a story that deals so much with magic and illusion, how integral is the role special effects play in your production of A Christmas Carol?
JC: I think a lot of people come to A Christmas Carol at the Guthrie with the expectation of spectacle. I try to create a balance of high tech ghostly appearances that make people jump out of their seats and small moments of simple theatrical magic that rely on actors and movement. I think it is great to have both.

A Christmas Carol features so many iconic characters and lines. How do you keep the integrity of them for the audience’s nostalgia while also pushing the envelope and creating something new?
JC: Again the story needs to take center stage. The iconic characters all serve their purpose in the story, so there is a limit to what you can do with them. But like all good works of literature and theater, these characters are drawn broadly enough to give the reader, viewer, or actor a chance to fill in the story. At the same time they are specific enough to make them feel like fully formed people. Each of them has a very specific influence on Scrooge’s transformation, and that has to be taken into account when making acting choices. But within the outline of their character and purpose there are many ways to play a character. Mr. Fezziwig is a good example. He needs to be the spirit of joy, warmth, and generosity — the opposite of Scrooge. He has to be a lovable man, someone Scrooge is immediately drawn to when he sees him again. How an actor creates that man can go in many directions, emphasizing the comedy, joy, love, and generosity. It is the actor’s challenge to find the particular and specific kind of joy or generosity that his Fezziwig shows to the world. It is a director’s job to make sure all those essential qualities appear in the right measures, and that the character’s purpose in the story comes through and balances with the effects the other characters’ have on old Ebenezer.

A Christmas Carol runs at the Guthrie Theater through December 27. For more information and to purchase tickets, head to www.guthrietheater.org.