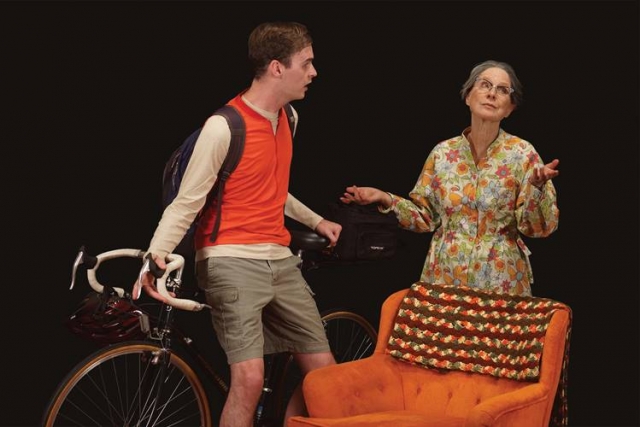 The title refers to the miles Leo has ridden on his bicycle. He hails from St. Paul and has traveled from Seattle to New York where Vera lives. Leo, as played by Murphy, is a revelation of how rugged masculinity is sometimes being spirited forth in the younger generation. Machismo needn’t be intolerant of those who are different and Leo innately gets that, though he does have his conflicts with women. And to be fair, the women have theirs with him. I learned and confirmed a few things about masculinity in young men today in watching him.

Leo is running from something which Herzog masterfully leans into as the play progresses. The frail Vera, proud of her communist background, becomes an unlikely anchor and empath for his troubles. The role is a much needed corrective about those who have been neurotically derided and stigmatized as Marxists. It’s some of Kelsey’s best work ever.

Herzog gives us two vivid worldviews and it’s thrilling to see the two views and the two generations interact. Vera shaped hers from an unapologetic collectivist angle that upholds the primacy of community and interpersonal care of others. Leo is individualistic but fiercely tapped into the need for justice, compassion, respect for the earth and human dignity. At times, the two seem to bombard each other with brutal forthrightness, yet they never remove themselves from communication and always have a way of sustaining their emotional connection.

Moreover, Kelsey and Murphy subtly illuminate the similarities, sometimes to the point of intimacy. Both characters want similar things for the planet, something that Leo’s conservative parents (only spoken of in the play) seem to have no interest in or feel for. As Leo’s trauma is revealed we learn he has an innate disgust for corporatism and authoritarianism that his grandmother would surely share but which his parents would probably rationalize. (This has to do with something confiscated—you’ll have to see the play.) Those who feel they are more like their grandparents than their parents will find validation for that in 4000 Miles.

Herzog has also penned two very different young women of today in major supporting roles. The striking Becca Hart brings warmth, ice, and fiery intellect to caucasian Bec, Leo’s one time significant other. The vibrant Joann Oudekerk is Amanda, a young woman with an anti-communist axe to grind because of her Chinese roots. She is also unsettled about what she wants in life and even how to find her place in it, but very clear for the time being that she wants Leo. As with the main characters, the playwright lovingly apprehends contradictions, foibles, virtues and vulnerabilities of these supporting characters.

Amy Herzog may well be the new Lillian Hellman—someone who compassionately understands both men and women to their cores. Someone who doesn’t get shut down by politics. And someone who knows how to weave that consciousness into one hell of a drama. This production is not to be missed.
4000 Miles
Through Dec. 21
Park Square’s Andy Boss Stage, 408 St. Peter St., St. Paul
www.parksquaretheatre.org