If there are two things I dig as an internet voyeur and researcher, they are local lore and couchtrip urban exploration. Stories of haunting and intrigue in the Twin Cities and abandoned or now-demolished landmarks throw me down rabbit holes of adventure for hours.  Shows on SyFy about paranormal investigations and ghost hunting usually pique my interest as, if nothing else, something to consider as a possibility…ghosts, spirits, the others.  I’m a social scientist.  I’ll entertain just about any notion, particularly ones that are the slightest bit exciting.

The Twin Cities have a variety of local haunts for people with similar interests in the paranormal.  From what I’ve read over the years, there’s a young lady ghost at Forepaugh’s who is the spirit of a spurned young maid who killed herself in the mansion. I used to walk my dog past the Griggs Mansion on Summit Avenue when I lived nearby in St. Paul which is apparently the most haunted house in the region (and it’s still on the market for a lucky buyer).  While I doubt I could finagle a tour of the Griggs Mansion from a realtor, we can get our fix for curiosity and creepiness at the third most haunted location in Minnesota, the Wabasha Street Caves in St. Paul.

The Wabasha Street Caves are sandstone caves in St. Paul that are currently used as an event space for weddings, proms, and murder mysteries…in addition to weekly swing dancing. Host of multiple tours in St. Paul from gangsters to graves and ghosts, visitors can ride buses narrated by actors pointing out the locations of historical relevance…or take tours on foot, such as the Historical Cave Tour or Lost Souls Tour. On a sunny day in October, a friend and I stepped into the dank darkness for the Lost Souls Tour ($10 for 1hr) given at 12:30pm on the last Sunday of each month, with additional days in October (check the schedule). 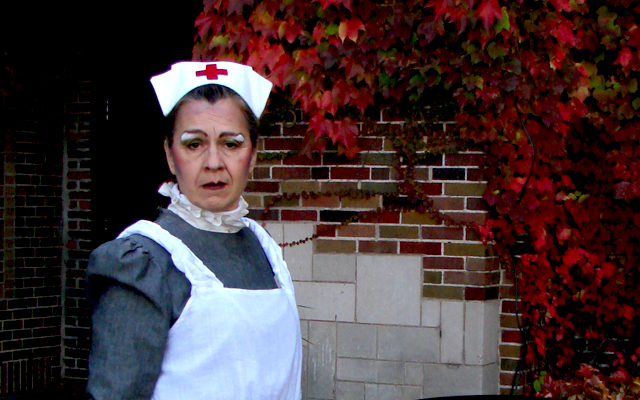 Having already taken one of the St. Paul Gangster Tours, I knew I was in for a quality experience, with a little bit of self-aware camp thrown in.  The wry, accented Nurse did not disappoint.  She’s called the Nurse because she’s always dressed like a nurse.  Or so she says.  Each tour, whether on bus or on foot, is led by other such actors who lend a bit more flair to the historical drama or, in this case, the haunted drama.  Walking into the Caves, we had to pause for a few minutes to let our eyes adjust to the dark.  I was surprised by, even though I knew a candlelit tour would be dark, just how dark it would be the entire time.  Depending on the surrounding surfaces and whether or not light reflected off of them, it was fairly nice and creepy the whole time.

Then, the Nurse told us about the app.  It was about to get creepier.  Pulling out my iPhone, I downloaded that app faster than you can say “Wabasha.”  Ghost Radar by Spud Pickles is a free download and was to indicate where there are disturbances in our surroundings, as well as any words that are picked up as being said by something otherworldly.  Well, tickle me pink.

Trying to listen to the Nurse and monitor my glowing Ghost Radar turned out to be a bit too much for me and I pocketed it for a while so I could hear more of the background of the caves and some of the experiences had in them by previous owners and even some of the current staff.  Fascinating.  I won’t commit any spoilers here, but when standing in a space in the dark that has a storied past that involves gunshots that are still pockmarking the walls, I’m fairly suggestible.  Add a fairly credible-though-comical actress to vouch for the stories and I’m listening with rapt attention.

Walking through the various rooms of the Caves in the near-dark, it’s easy also understand how the mind can play tricks on the visitors.  Heck, I had an iPhone in my pocket that was about to mess with my head even more as soon as I took it out, thanks to the stories I was hearing.  Finally feeling like I could be able to multi-task listening to the Nurse while staring at my Ghost Radar, I turned it on, let it get a baseline, and watched for any blips on the screen.  I even had the presence of mind to do some screen grabs: 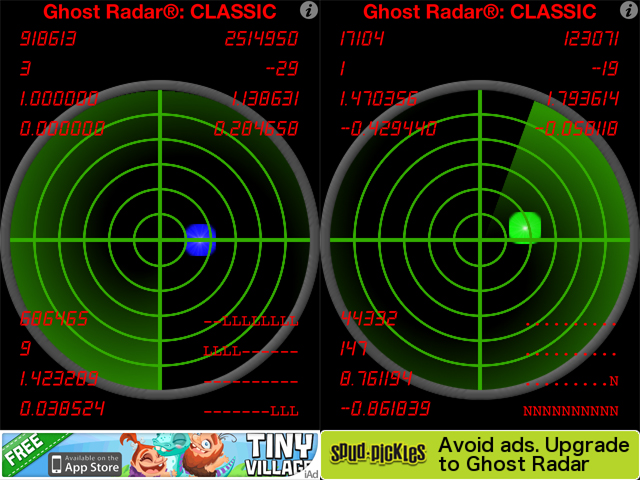 The blips on the screen indicated where there was a disturbance in the baseline readings of the room.  I watched as we walked and there were times when the radar was blank…and there were times when colored blips indicated different strengths of disturbance, or presence.  With one ear on the narration and two eyes on the glow, I wasn’t too uptight about what I was seeing.  That was, until I saw this one. 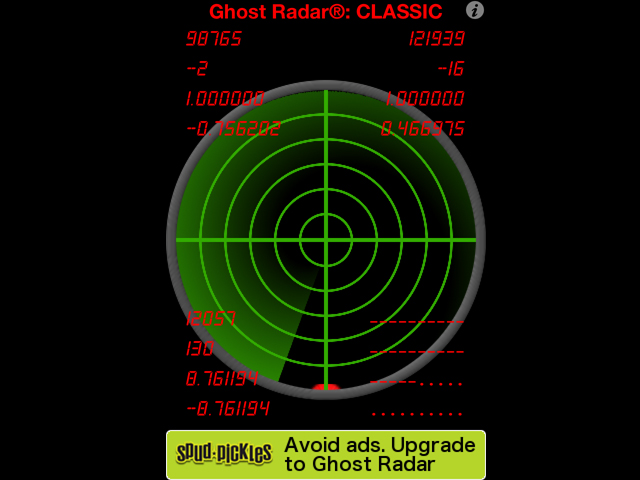 Red is the strongest signal and this one was right behind me.  Or it was me.  I don’t know.  It made the hair on my arms stand on end.

There was a kid on the tour who was using his parents’ iPhone to use Ghost Radar and I kept looking over his shoulder like I was cheating on a test, trying to see if I was getting the same information as he was.  He mentioned that his Radar was giving him words and I was immediately jealous.  I hadn’t gotten any communication yet.  The Nurse, perhaps sensing my covetousness, clarified that kids are often communicated with more than adults.  Fair enough.

Imagine my surprise when I suddenly got this series of screens:

See the words at the top in the middle?  Nothing of what the Nurse was saying involved these words at this time and nobody else was speaking.  I think, if I recall correctly, she was talking about an encounter that her daughter had in the Caves at the time these words popped up on my screen: research, development, Louis, before.  Not wanting to disrupt the tour, I decided to ask about these words later.

Without the app, the tour is interesting and varied with a look at photographs that have documented what can be considered evidence of ghosts or spirits in the Wabasha Street Caves.  With the app, it’s just a wee bit more interesting adding unpredictability to the hour-long experience.  I would have enjoyed it either way.  Wrapping up the tour with a slideshow of guest-submitted photographs was a nice touch of not-quite-so-anecdotal evidence.  Seeing what has caught the eyes of people over the years brings it a little closer to home that any one of us might encounter someone from the other side while in the Caves…especially since some of the ghosts are particularly fond of various locations in the Caves or circumstances, like playing swing music.

Coming to the end of our hour as we ventured out into the sun and people went to their cars. I asked the Nurse if the word “Louis” meant anything in the history of the Wabasha Street Caves.  She said that “Louie” did.  I was a little bummed until she spelled it, “L-o-u-i-s.”

The Nurse explained that Louis Lambert was among the first to develop the Caves from being a mine for silica to being a place to grow mushrooms in the 1890s.  I did the research: Before it was a speakeasy and bar, it was a development in which Louis Lambert grew mushrooms.  See what I did there?  Italics help.

Yeah.  Sometimes, evidence corroborates stories that we want to believe…and sometimes stories are built out of evidence.  Either way you look at it, I’m sitting here at 11:24 at night in my loft which was renovated from an old warehouse…and I will not turn on that Ghost Radar to see what it has to tell me about my home.

Some things are better left unknown.

Get to know the Lost Souls of the Wabasha Street Caves in St. Paul.  It’ll be worth your while.