I haven’t been to a Halloween-themed attraction in many years.  I’m not big on Halloween, I used to love it as a kid, once winning the 150-unit apartment buildings costume contest and winning a Susan B. Anthony dollar in the process (thanks Mom!) but I no longer dress up or do much for it.  However, I do have the common decency not to go to a costume party dressed as “Office Worker” or something equally try-hard-to-not-try.  I recently became curious about visiting ValleySCARE for Halloween Haunt (as Valleyfair becomes known once fall rolls around) on the back of a friend’s recommendation.

The night I went to ValleySCARE was coincidentally the same night as the Zombie Pub Crawl.  Figuring most of the Undead would be busy stalking city dwellers, a friend and I hopped in the car for the haul out to Shockapee (get it?).  On the drive out to the park, I passed by some old landmarks I remembered from school field trips to Valleyfair, I believe under the guise of studying physics.  I was starting to get excited, I wanted to hit the gate and find a ride fast.  But then I ran headlong into $12 parking.  Why isn’t parking included in the price of admission?  Does anyone walk to Valleyfair? 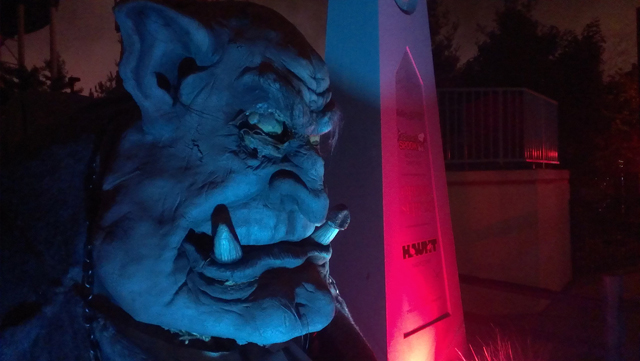 At the gate we were greeted by TSA-level of security.  This apparently isn’t in place during the day, but I actually appreciated it at night, especially with the park filled with unruly young people.  With the amount of machine-made fog rolling around the park and purposeful lack of lights, it’s a bit hard to navigate around, let alone not walk right into someone.  We were given a map that was fairly useless, relying instead on memory for ride locations.

The park was decked out in grand fashion.  Nothing was too hokey, the majority of decorations were fairly innocuous, although seeing Snoopy covered in skeletons and demonic lighting was a bit odd.  The child-sized skeletons hanging upside down from trees got my friend and me to chuckle.  The performers in the Scare Zones, special zones where performers are more aggressive in their scare attempts, wore fantastic costumes and makeup.  One particular ghoul snuck up on teenaged girls watching a fire dancer, slammed a 5-gallon bucket on the ground immediately behind them, and sent them scattering as he made chase.  A girl in a would-be ticket booth was knotted into a pretzel, her left leg hanging over her shoulder, with her foot resting on the counter. 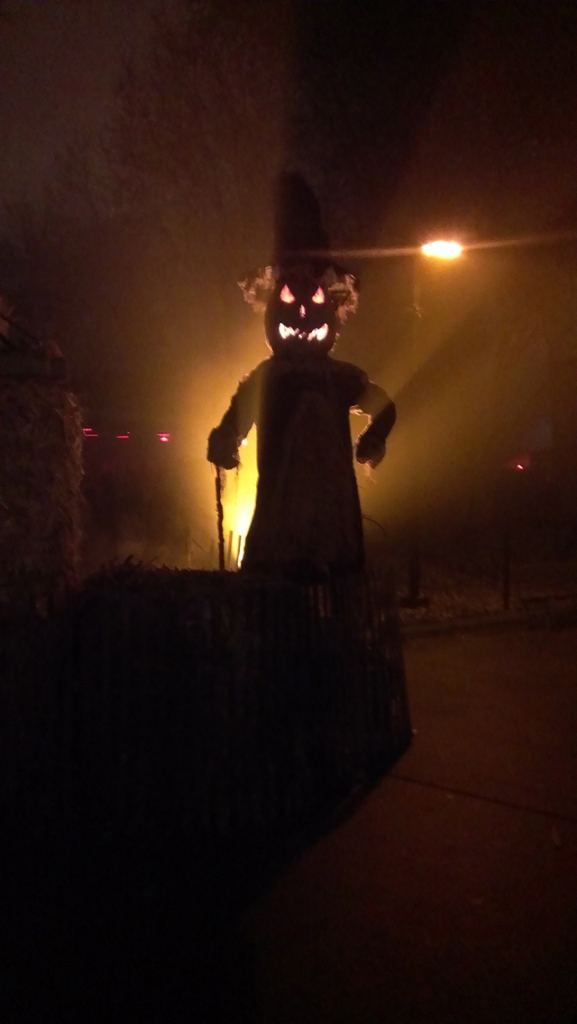 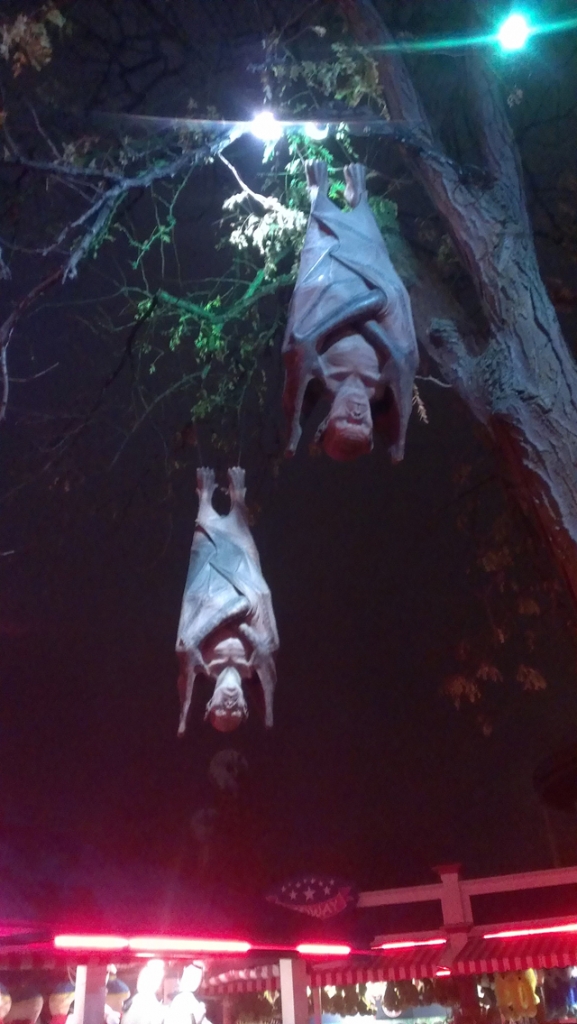 The other Hallow-themed attractions are the mazes.  We were able to get in Mr. Cleaver’s Bloodshed maze.  I remembered the name from the website, as it sounded like it would be the most intense of the scare mazes.  The Bloodshed was a mix of Texas Chainsaw Massacre and a meat processing plant.  Pigs heads being fake chopped in half, human torsos hanging upside down in bags (that wiggled due to some mechanical device), blood-covered butchers jumping out at you, a bloody freezer chest just slightly ajar, and maybe the most effective bit was the man in a mask simply banging a meat cleaver on a chopping block, its loud thwack echoing around the maze.  My friend was the target of many of the scares, and although effective, I felt the maze was about twice as long as needed.  You get the idea after 10 or 12 rooms, 20+ seemed to drag on.

I mostly went for the rides.  Oh, the rides.  Just after arriving we were able to get on The Scrambler without any wait!  No wait is the best wait.  I was immediately back in kid-mode, whooping and laughing and yelling “I wanna go super fast” (which should be reserved for riding The Supercat, but it wasn’t in operation).

Next we hit The Tilter (aka Tilt-A-Whirl).  I forgot how brutal this ride can be on one’s spine.  Spinning round and round, laughing as my neck muscles cried for mercy.  One of the best rides on a Tilt-A-Whirl I’ve ever had.  I love coasters and other extreme rides, but it’s hard to beat the classics for sheer bone-jarring fun.

For the record, my companion is afraid of heights.  Power Tower was immediately written off, which was fine with me as I think it’s a bit of a one-trick pony, especially for the long wait.  But as luck would have it, my friend was okay with roller coasters (in general, we’ll get to that).  I was keen to go on Wild Thing, which towers 207′ over Valley Fair, and 201′ 8″ over my friend.  Once in the coaster car, the climb up the first hill takes about twice as long as you think it should, the anticipation is agonizing.  At the top of its ascent, the car crests the track and pauses for a few seconds before gravity calls the train back to Earth down a near-sheer vertical drop.  Wild Thing is very fast around its twists and turns and zero-G bumps, but the best part was descending into a pitch-black enclosure, eliciting the most screams of the night.

We kept winding our way around the park, going on Renegade (a violently shakey wood coaster), The Corkscrew (short but sweet classic coaster) and then, Steel Venom.  Steel Venom is a launch coaster, you sit in a chair suspended beneath the track and are accelerated up the tall, twisty ends.  Right before we got on the ride, my friends mettle wilted a bit, but she still got on (conveniently there aren’t a lot of spots to bail out of line), all extremities grasping any available piece of machinery for extra safety.  There isn’t much to the ride besides speed and height, although there is a stutter-pause on one of the trips back and forth that lets you believe for a nanosecond that there is a malfunction and you’re going to fall face first 180 ft. into the parking lot.  But that’s the fun of thrill rides, isn’t it?  My friend would counter it is not, and declared she was done with rides for the night.  To her credit, we still went on The Enterprise, which surprisingly, made me feel not-so-great afterwards.  So I sprang for Mini-Donuts to sooth her fears and my stomach.

Although not an evening I would generally describe as “cheap”, it was super fun, exceeding my expectations by a fair margin, and well worth the trip.  I hadn’t been on thrill rides in several years, and I really think they are made better at night.  The dark, the fog, the lights, all definitely enhance the experience.  There are less scary mazes for the younger kids and plenty for everyone to see and do.  If you scare easy, you can alway scoot close to a buddy.  Get out to ValleySCARE this weekend, next year is far away!