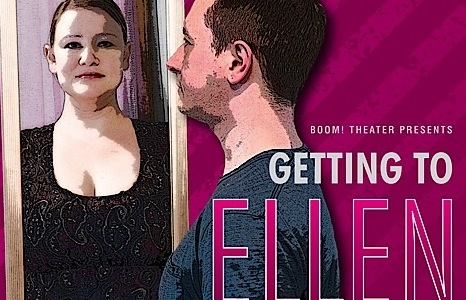 This year’s Minnesota Fringe Festival has an array of GLBT shows that last no more than an hour. It’s a great way to take the pulse of where things are and where they are going within the queer “zeitgeist.” This year’s trans-oriented shows promise to be especially strong. Some of the GLBT works are locally grown, some have come from afar. Here are some of the offerings that can be seen at a variety of Minneapolis venues. Go to www.fringefestival.org for performance times. 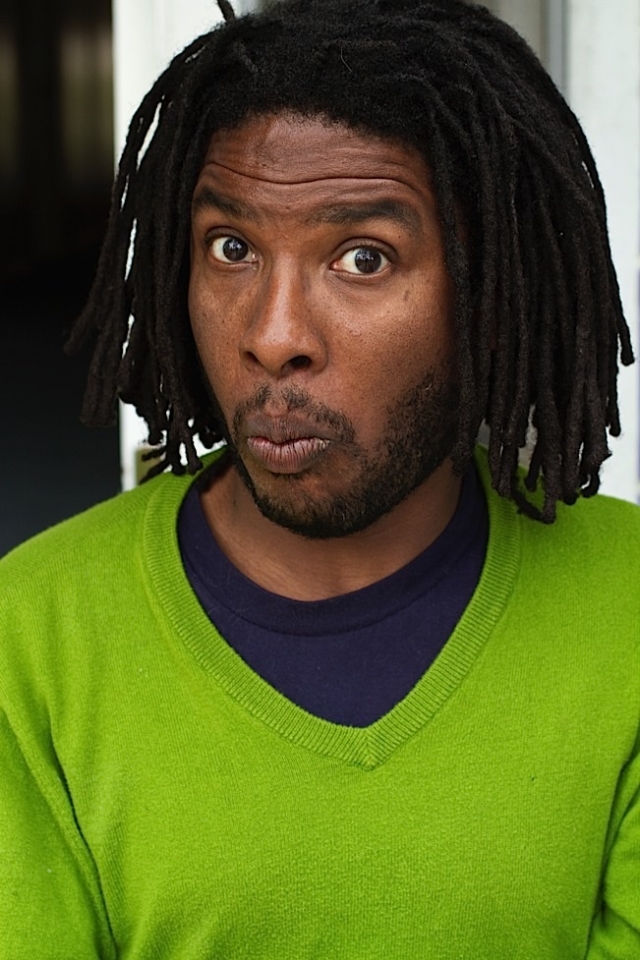 Les Kurkendaal of Coffee, Tea, or Me. Photo by Matheu Brooks.

Coffee, Tea, or Me
Phoenix Theatre

No. It’s not that racy pulp (hetero) sex fiction book, it’s one of Fringe’s most beloved veterans, Les Kurkendaal. He may be from L.A. but he has a devoted Twin Cities following. This show is about the time he took a road trip to Minneapolis from Los Angeles to get over a serious case of writer’s block. He listened to a lot of public radio on the way, which fueled his imagination.

When a cow (Hector Chavarria) and a Queen (Erin Denman) try to escape the wrath of three princesses named Kay (Alana Horton, Briana Patnode, Madelyne Riley), butter actually becomes a matter of life and death. Director Chris Garza shares: “I’ve lived in Minnesota for almost a decade now and even though this has become my home, there are aspects of Minnesota that remain fantastically strange. I’m talking about the butter princesses at the State Fair. I wanted to make a fun show rooted in my love for the princesses — and my love of butter — with a great cast and a queer sensibility. (It is) set in outer space because it’s Fringe!” 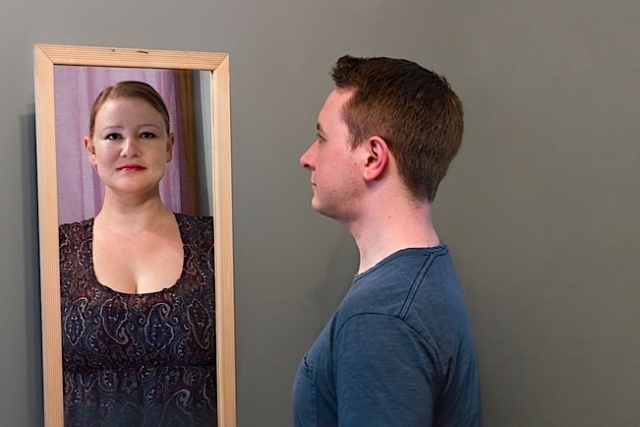 Getting to Ellen. Photo by Kim Pettengill.

Getting to Ellen
Mixed Blood Theatre

Trans activist-author Ellen Krug’s autobiography has been adapted for stage by David Ahlvers and directed by Patrick Kozicky who says, “Though Ellen Krug’s journey is very specifically about her gender identity, there is a very clear message about self-discovery and living your life authentically.”

Krug shares that the play “focuses on my struggle to love myself over loving Lydia, my soul mate of 32 years. We had started out as high school sweethearts. Like many, I was taught that self-sacrifice for others is paramount; for me, that rule meant denying my essence as a woman. I believe the play explores this struggle and the theme of how each of us seek authenticity as our true selves. I call it my ‘gender journey.'” Produced by the GLBT-oriented BOOM! Theatre. 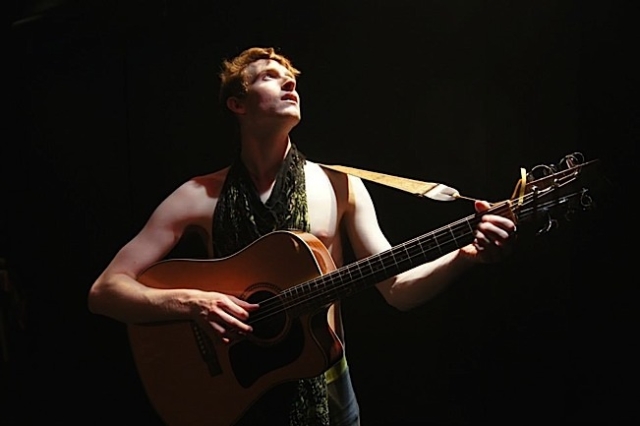 Growing Into My Beard. Photo by Artem Yatsunov.

Growing Into My Beard
HUGE Theater

Written by solo performer Bay Bryan, director Artem Yatsunov shares that this “is a personal coming-out and coming-of-age story. From Bay’s hilarious and erratic improvs, his soft and silken songs, to the lingering melodies undercutting scenes of sorrowful daydreams, the entire show is ultimately Bay’s triumph of identity. To me, Bay’s story is a great statement of why celebrating the acceptance of your queer identity is just as vital as acknowledging the struggle of being queer.” 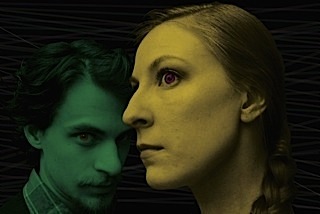 Tim Uren has created some marvelous Fringe shows in the past and his latest, Melancholy London, produced by Ghoulish Delights, looks to be a sure bet. He goes to supernatural Welsh author Arthur Machen’s The Inmost Light for this new stage adaptation.

Uren shares, “The first time I read Machen’s tale of theft, murder, and demonic possession, I was left saying ‘but I loved that!’ and ‘I’m not sure what happened!’ The plot and characters are swimming in subtle insinuations and unspoken agendas. In the story, Dyson (Tristan Miller) tells his acquaintance, Salisbury (Matt Saxe), about the investigation of a strange crime. As I worked with the text, the tone of their conversation reminded me of the way ex-lovers speak: a strange blend of good manners, vague accusations, and bittersweet affection. Once I saw that I could no longer see the story in any other way. In my adaptation, their love is what’s truly at stake, and Dyson’s sinister tale of Dr. Black, played by myself, and Mrs. Black, played by Boo Segersin, serves as a dark mirror to their relationship.” 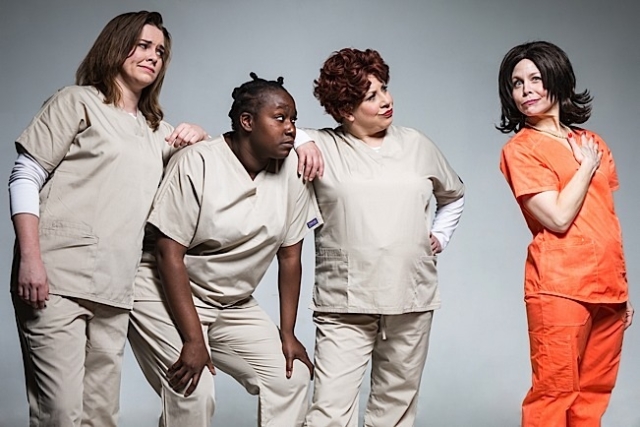 Max Wojtanowicz and Nikki Swoboda gave us the terrific Fruit Fly: The Musical with Michael Gruber’s music. Their latest draws on the political ramblings of former Republican Congresswoman Michele Bachmann, including her feelings on GLBT legislation and the community at large. It also features a lesbian character played by Kendall Anne Thompson.

(Doppleganger Alert!) Those who enjoy Kim Kivens’s top-notch musical performances have probably noticed that she resembles Bachmann. So you, like me, knew it was only a matter of time until she played the Tea Party’s favorite homophobe on stage. Kivens shares, “Shelly Bachberg Presents: Orange is the New P.O.T.U.S.: The Musical is a show about how easy it is for people to come into power. A blind eye can be turned and the next thing you know that crazy wacky politician that you can’t believe is taken seriously is now in office. My motivation to do this show is due to the writing being smart, kooky, and off-the-wall because a lot of it isn’t a stretch to what a certain real politician may have said and continues to say in the public eye. Thank goodness for YouTube; I use it for character study.”

Pam Colby is a filmmaker of note because she tells such great stories (including having written some for this very publication). So you can easily imagine she can do the same in person. Colby is joined by another talent, Javier Morillo. She shares, “I first heard Javier perform when I attended the monthly Moth storytelling competition at the Amsterdam Bar and Grill in St. Paul. I was struck by how out, honest, and vulnerable he was. Clearly the large multi-generational audience was receptive. I began telling my stories and the audience connected. We decided to join forces in a Fringe show. My stories are about growing up queer in Iowa, and navigating gender borders. Javi’s stories are about growing up queer in Puerto Rico, and navigating cultural borders. Humor is central to our approach.” 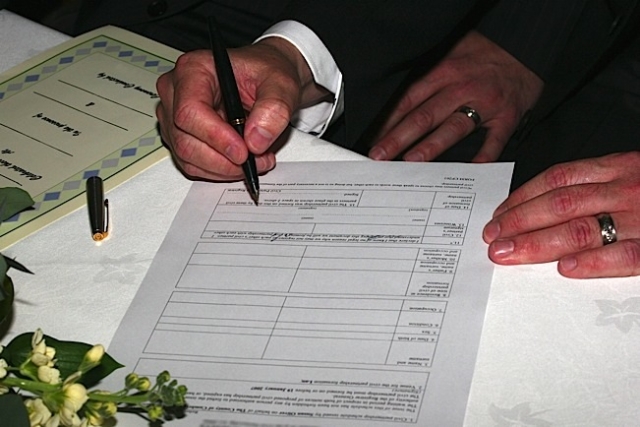 You may remember this grouping of plays by various playwrights was simultaneously presented in 40 theaters in 2011. It was a historic event for both the histories of gay and lesbian civil rights as well as the American theater. The Ensemble Theatre Co. in partnership with Dakota Fine Arts Consortium has revived it — a great idea, given now that we have marriage equality. The more we reflect, examine, and — not to mention — have some laughs about gay marriage, the better informed we are about this institution we can finally partake in.

Director Mary Beth King points out, “Like all brides and grooms, these couples have the usual issues to solve before marriage that cause fights and tears and drama: legalities, connecting flights, family interference, table place cards, reception venues, the definition of lifetime commitments, and the meaning of promises.”

Playwright and book author Christy Marie Kent says Trans Families tells the stories of three families with minor children when a parent transitions. “When I went through my own transition, several people at work or in the neighborhood said, ‘I don’t have anything against him becoming a woman. Really! I’m not a bigot. But, I’m just worried about the children. If he really cared about his kids, would he put them through this?’ I hope that this project — the book and the show — puts an end to that kind of thinking, for these stories demonstrate that the kids are going to be all right.”

Kent, an intensive researcher, shares, “I loved getting to know these families. To get the story of the transgender trucker, I rode with her for a week, getting insight into the trucking lifestyle while recording her story. In some cases I have done the phone interviews by phone or via Skype. But, in all cases, these people illustrate that the best option for each individual family depends on its situation.”