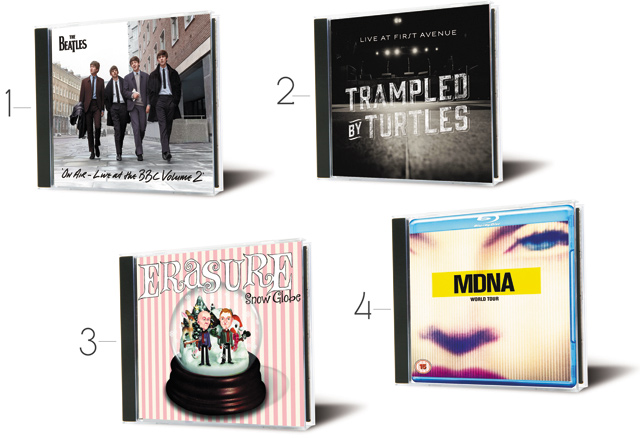 1. Beatles On Air – Live at the BBC Vol. 2
Nearly two decades after the first set was issued – and nearly half a century after they were first aired – several dozen classic tracks performed by the Beatles in their live prime are finally available (legally, at least; bootlegs have been out for decades). Fab Four fans will be thrilled to hear two previously unheard tracks – “I’m Talking About You” and “Beautiful Dreamer” among the tunes here, along with a completely different line up from the first volumes. And to add the fun, there is plenty of between-song banter with the very young and very cheeky quartet. If you missed out on the first set in 1994, a combo box set is also available.
$19.99

2. Trampled by Turtles Live at First Avenue
Sure, it’s not a single, 30-minute droning solo, but this Duluth-area band celebrates a decade together with a smoking set recorded at the confines of the Minneapolis music mainstay. As the Turtles has pushed at the boundaries of the local scene to become something bubbling up nationwide, they’ve never lost the deep connection with their musical and cultural roots. You can hear live editions of “Wait So Long” and Alone,” of course, along with more obscure cuts. The band even showcases the full breadth of their influences with a cover of the Pixies “Where Is My Mind?” For the visually inclined, a DVD captures the set (recorded over three nights), while a bundle that includes the DVD, a vinyl copy of the album and a coffee-table book is also available.
$9.99

3. Erasure Snow Globe
Really, who doesn’t want a collection of seasonal, Christmas and holiday songs from this longstanding British dance-pop duo not named The Pet Shop Boys? The resulting album is a mixed lot of classic holiday tunes (from “Silent Night” to “White Christmas”) to original seasonally themed tracks. The originals are more satisfying here, as the various standards sound forced when rendered in a synth-pop style. When crafting their own music, Andy Bell and Vince Clarke give us a slightly moody rendition of the holiday with tunes like “Blood on the Snow” (which sounds like a track from A Very Special Fargo Christmas) and “There’ll Be No Tomorrow,” while even “White Christmas” has more than a touch of menace hiding in its chilly grooves.
$9.99

4. Madonna The MDNA World Tour Blu-Ray
If you missed Madonna’s last world tour – or just want to revisit the memories – this live concert film will bring it all to life in your living room, den, bed room or wherever you want to enjoy it. Footage is drawn from more than 80 shows from the sold-out tour, employing dozens of cameras to build the perfect audio and visual experience. Both are vital for this tour, as Madonna not only brought the music, but also crafted a visual feast featuring 25 dancers and plenty of stage effects. On the music side, we get an overview of Madonna’s career, from “Papa Don’t Preach” and “Express Yourself” to “Vogue” to “Gang Bang” and “Love Spent.”
$19.99