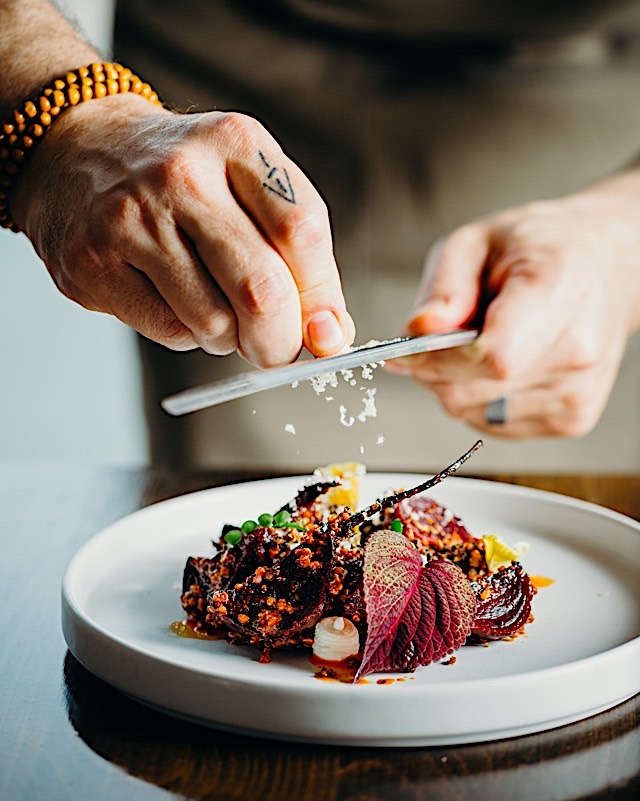 It’s James Beard season. The highly-coveted restaurant awards—the industry’s Oscars—will be announced mid-June, so I’m in the process of judging the judges via visits to our local candidates.

This week, it’s Petite Leon, Chef Jorge Guzman’s third run (2017, 2019, 2022) for Best Chef Midwest. Is he, in wedding parlance, destined to be “always the bridesmaid, never the bride”—or will he take home a medallion?

I’ve tasted Jorge’s food ever since his stint, in a decade long past, turning out tapas at now-shuttered Solera in downtown Minneapolis. This round, while his menu heralds touches of his Mexican heritage, I’d call his current menu Latino Lite. (This is neither praise nor criticism.) For instance, while the quartet of starters ($10 range) includes a piquillo pepper number, the remaining three bear little stamp of his heritage—including our chosen starter, the smoked salmon rillette.

Next up, a selection of eight small plates (mostly $12-16)—Caesar to frites, with stops along the way to incorporate some Latin accents. We split an order of bison tartare—sweet and chewy, mined (overly, I might add) with crunchy pops of sweet roasted sunchokes (better to serve them on the side and let each diner decide their fate), along with a smoky Spanish cheese and bits of nori, all attended by a flurry of small, supermodel-thin potato chips—as garnish, rather than conduits for the ruddy meat. I’d prefer a return to plain ol’ toasts, which offer a more effective textural contrast as well as transport from plate to mouth.

Next, the beets. A plate of large chunks arrive, clad in a nicely hot-spicy chili-garlic paste (love it!) sided with bitty pools of yogurt, a sprinkle of rich, savory cashews that class up the earthy dish, and grains of quinoa for grounding—all in all, a shareable portion that delivers on its promise The kitchen’s famous cheeseburger, which looked terrific on adjoining tables, is listed among the starters. Add the frites with turmeric aioli, and I’ll return and call it a meal.

Or. Continue to the selection of four mains ($24-34), ranging from spaghetti nero to carne asada, pausing along the way for our order of al pastor. It’s a giant (definitely shareable) portion of pork collar, cooked till submissively tender and loaded with flavor. It’s plated with a tiny dice of pineapple. The fruit’s uber-sweetness is tempered not only by a segment of lime awaiting it on the plate, but by smoking. A pleasant schmear of a chipotle-esque sauce and a couple of robustly-textured tortillas complete the production. Satisfying, but not a dish that lingers in one’s dreams. Next time, I’d go for the spaghetti nero with rabbit sugo or the carne asade piqued with garlicky chermoula sauce.

Yes, we saved room for dessert. Choose between cheesecake and rice pudding ($8). Our arroz con leche arrived in a bowl big enough to feed the football team, brimming with chilled, milky rice cooked with cardamom, and festooned with pistachio nuggets, bits of fermented plum and a topknot of sweet toasted coconut.

The room—digs formerly occupied by Nightingale on the 38th & Nicollet food hub—are noisy indeed, crowded with folks having a grand time. We grabbed a window-side high-top near the bar in order to conduct a semblance of a conversation—and a chance to ask our server about the grammatical faux pas in the restaurant’s name, chosen to honor the owners’ sons—the feminine ‘petite’ instead of the masculine ‘petit’.