Web Extra: Mr. Twin Cities Leather 2016: “Hello From the Outside”

The Mr. Twin Cities Leather 2016 title was awarded to Emerson Kellogg on Saturday evening, Feb. 13, at The Saloon. At the time Kellogg was presented with the title sash he was wearing only a harness, a leather jock, and a pair of red patent leather spike-heeled pumps (and “jungle red” fingernails that matched the pumps).

Kellogg had plenty of company in the heels department: one other contestant, at least one other judge, two Saturday-afternoon discussion panel members, and both emcees sported high heels at some point during the weekend.

In this and so many other ways, this year’s Twin Cities Leather weekend, held from Friday, Feb. 12 to Sunday, Feb. 14, was not your granddaddy’s leather contest. And that’s okay, or even better than okay. The weekend was a safe space for “outsiders among outsiders,” which also happened to be the theme of one of the weekend’s Kink U presentations.

In the Twin Cities and elsewhere, leather and kink culture is evolving to become a safe and accepting place for all ages, genders, orientations, ethnicities, and interests. Throughout the weekend, from Friday evening’s Meet & Greet to Sunday’s Victory Brunch, I saw shining examples of the collective energy, exhilaration, and sense of belonging and participation (and let’s not forget fun) that this atmosphere and attitude can inspire.

Friday’s Meet & Greet was about more than meeting the contestants and judges for the weekend. A raffle raised money for the Seville Fund, a scholarship program for GLBTQI young people affected by homelessness. Twin Cities Leather & Latte (TCL&L), the weekend’s producers, unveiled their new retail branding scheme. And Stephen Patton, the outgoing Mr. Twin Cities Leather 2015, was given a step-aside sendoff by his fellow titleholders. They offered congratulations and benedictions, in person and via video, while masquerading as members of the esteemed, semi-secret Old Guard leather organization known as The Council of Elders.

Saturday afternoon’s Kink U education events, presented by Titans of the Midwest, included classes on rope, flogging, and mind fucks, as well as the above-mentioned panel discussion titled “Sexuality and Desire: Being an Outsider Among Outsiders.” Panelists discussed fetishes and kinks that are outside the community’s mainstream, including “littles” (age play), “furries” (arousal by fur suits), and drag, heels, and corsets, as well as other kinds of gender nonconformity.

Saturday evening’s contest featured some amazing fantasy presentations by the contestants. Justin Anderson demonstrated how to give a coffee enema (perhaps inspired by the “& Latte” portion of Twin Cities Leather & Latte). Steve Sinclair demonstrated how to do a leather makeover while lip-syncing to “Popular,” sung by Kristin Chenoweth, from the Broadway musical Wicked. (Showtunes! Yes!) Anthony Sivanthaphanith’s fantasy showed him doing interesting things to someone dressed in a teddy bear suit (see “furries” mentioned above).

The most spectacular fantasy performance of the evening was Emerson Kellogg’s adaptation of pop music megastar Adele’s “Hello” video (which includes the lyrics “Hello from the outside”), complete with sunglasses, windblown blonde hair, and swirling autumn leaves. There was one change: the telephone booth in Adele’s video was replaced by a glory hole.

Although the announcement of Emerson Kellogg as the new Mr. Twin Cities Leather 2016 was the climax of the weekend, there was still one more honor to bestow. At Sunday’s Victory Brunch, the Robert Smith Community First Award was presented to John Bigger. The award recognized Bigger’s “ongoing contributions to the Minnesota Leather Community.” 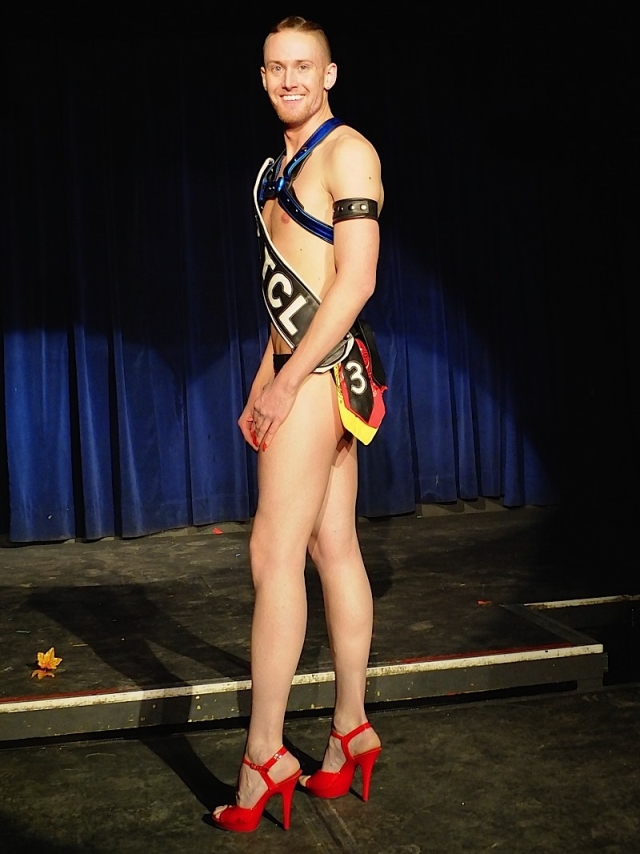 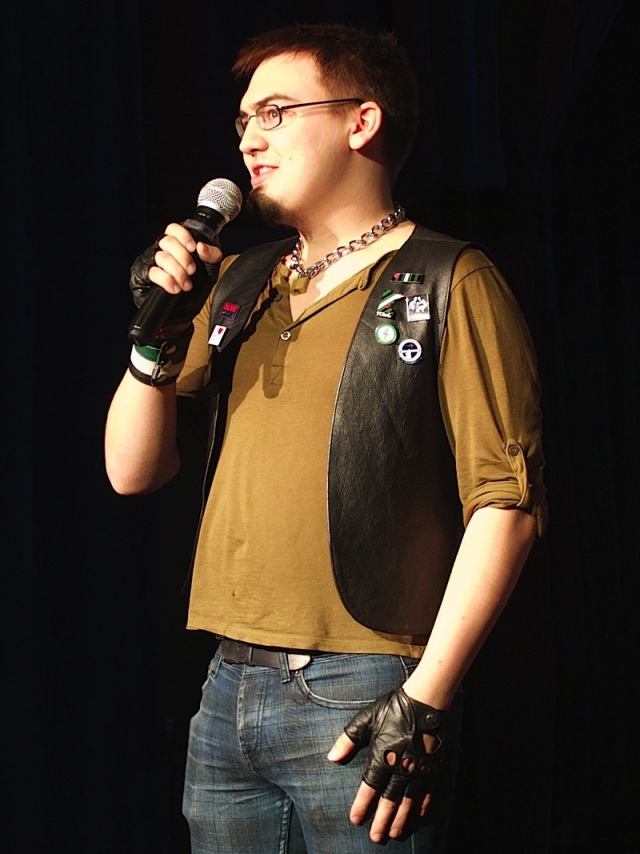 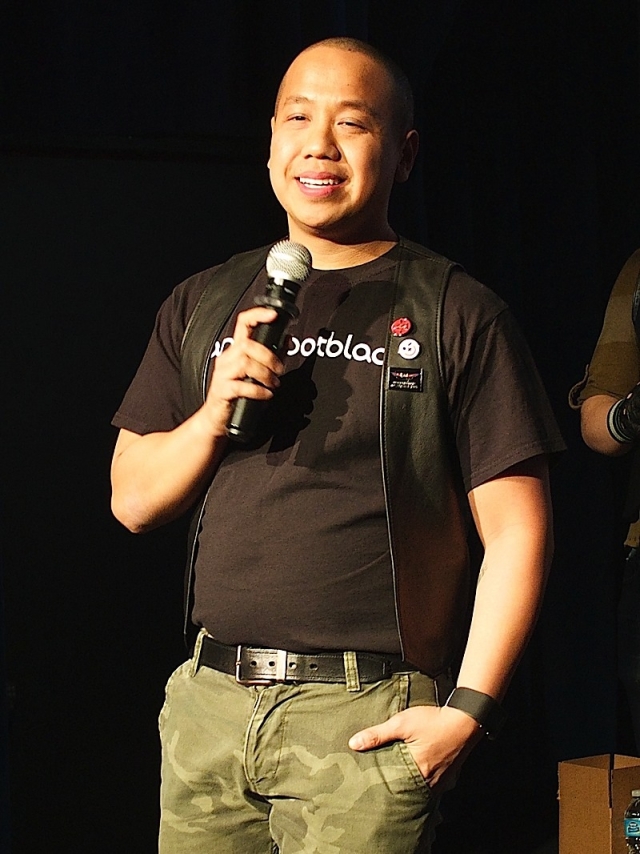 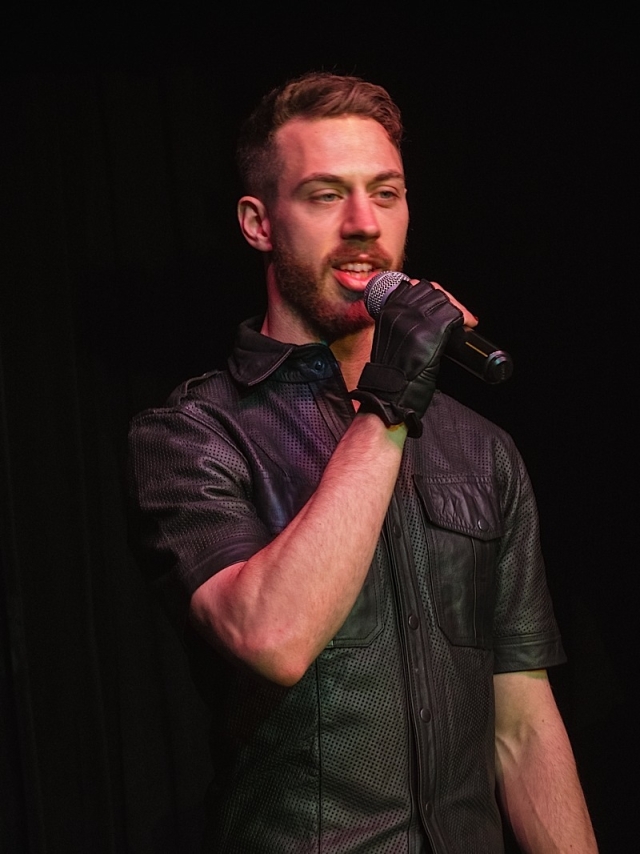 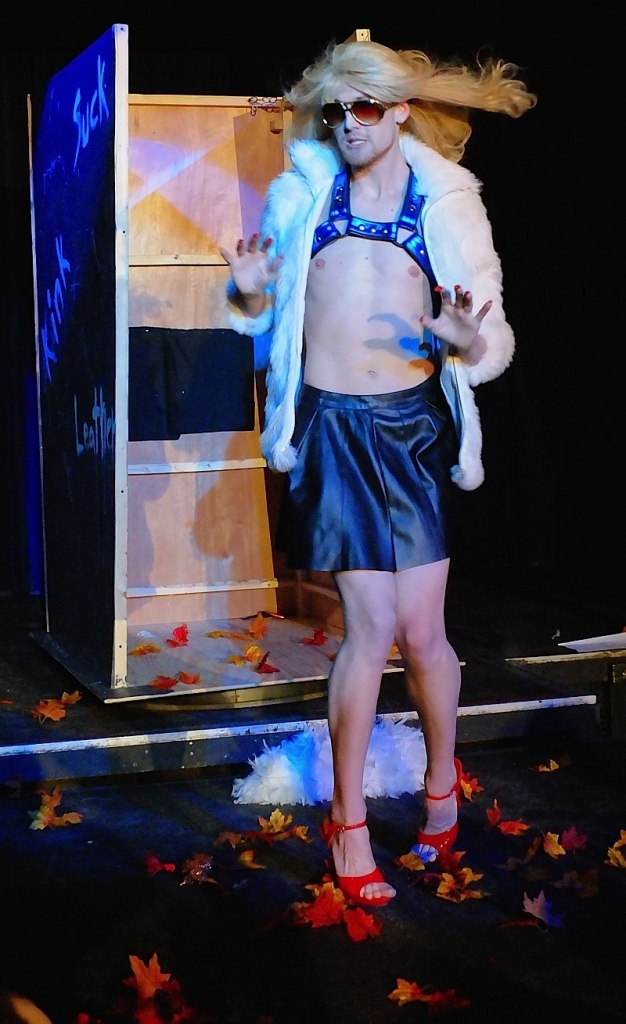 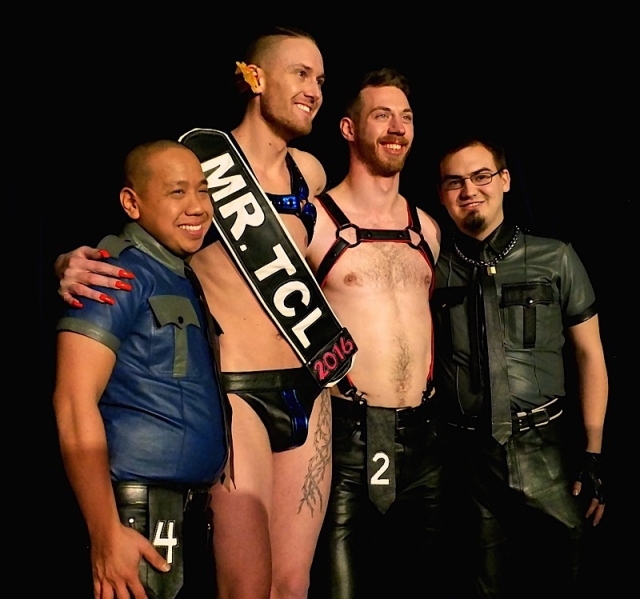 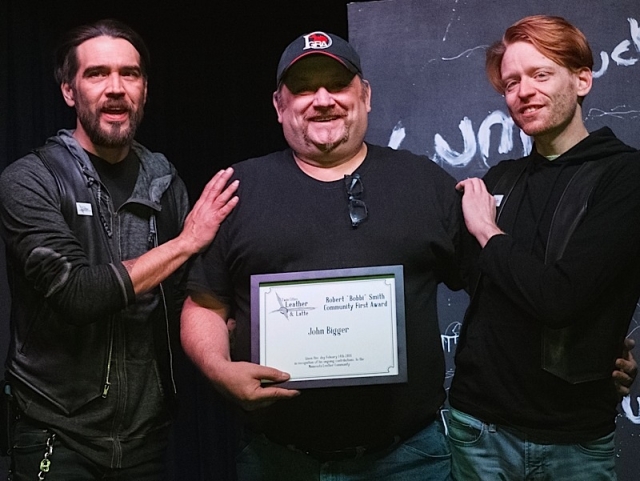