You look up. The wall in front of you is covered in colorful pegs, which you understand to be hand and food holds. Suddenly you notice the harness you’re hooked up to, for safety, naturally. That’s a relief. The only thing standing between you and the top of the wall is the amount of determination and practice it will take to get there. An instructor encourages you to start climbing. 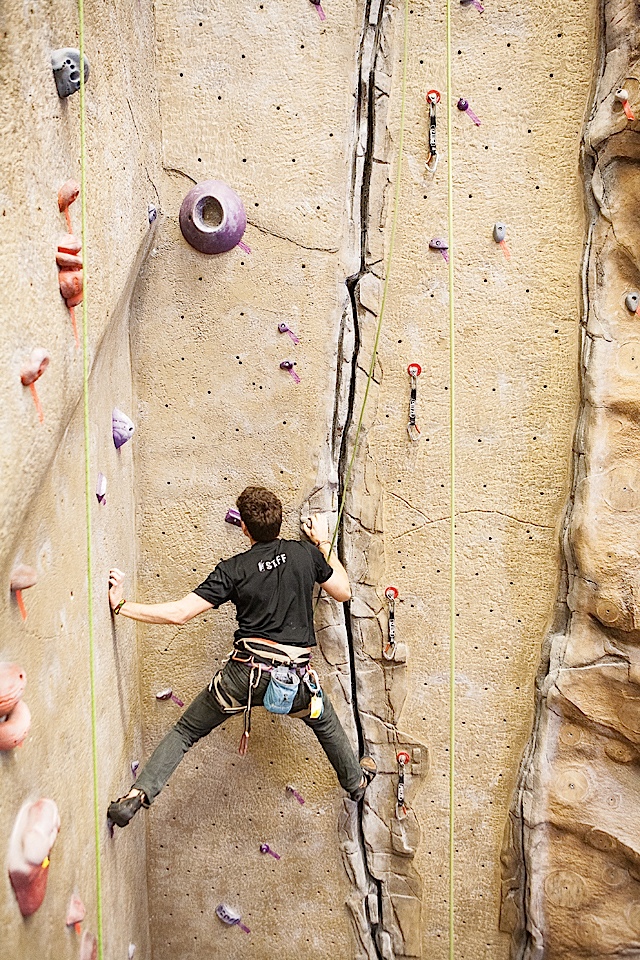 “It’s hard to describe the feel of VEM,” says David Schwab, VEM’s Director of Safety, Training and Guiding. “The attitude of the staff and members is awesome.”

For those not familiar with the “climbing community,” Schwab describes it as one of inclusiveness and cooperation. He says, “Everyone is trying to be the best climber that they can be, but not at the expense of someone else.”

VEM’s members and guests always have time for a helpful coaching tip or suggestion and are always willing to give advice or talk climbing — anything that supports the mission of bettering yourself. Schwab can’t remember a discussion at VEM of politics or nearly anything divisive other than which climbing area or which pair of climbing shoes is better. Rarely is there a harsh word or an argument except perhaps about the music playing at the moment (Schwab has learned to dislike dubstep, although he really enjoyed it a few years ago).

As a professional climbing guide and instructor, Schwab has had the opportunity to travel throughout the nation and visit numerous climbing facilities. “The structure and building that VEM is housed in makes it one of the most interesting and unusual climbing facilities I have visited,” he says. It is housed in the historic ‘Icehouse’ building which, as the name suggests, was used early last century to store ice cut from the Minneapolis lakes during the winter months to sell during the summer months. In addition to the historic nature of the facility, it is also located directly on “Eat Street.”

If you’re into climbing gyms, there are a few that can’t be missed. Two of the “must visit” facilities according to Schwab are in the Vertical Endeavors family: the Minneapolis and Chicago locations, specifically. Atlanta, Reno, and San Francisco also have incredible indoor climbing facilities and although they are VEM’s competitors, Schwab is quick to recommend that they be visited if the opportunity presents itself as well. 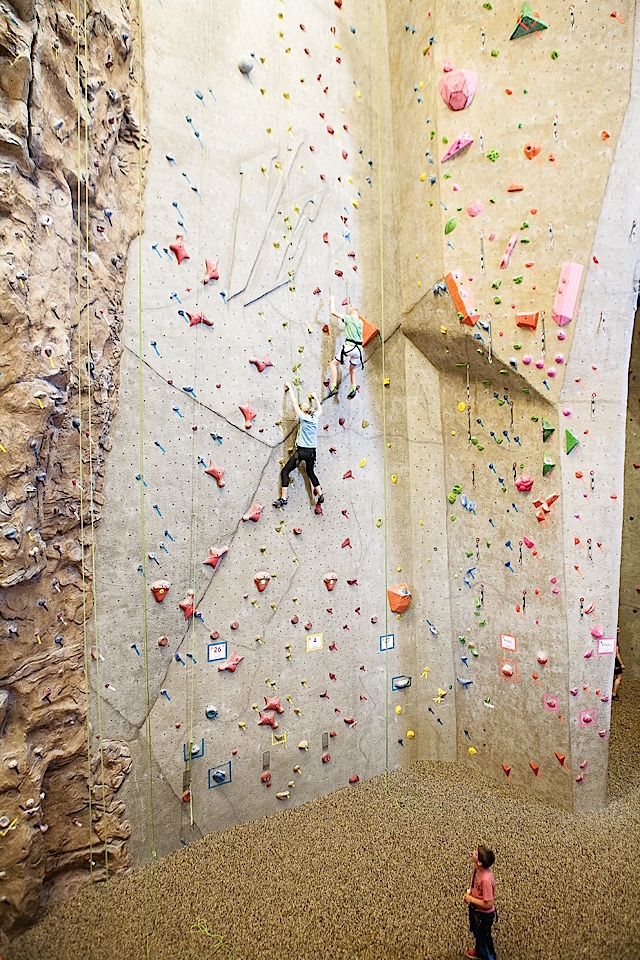 For anyone seeking a break from climbing, the VEM facility has a selection of aerobic machines, stair steppers, stationary bicycles, and running machines for members as well as shower facilities. According to Schwab, many members do not belong to any other gym and use VEM facilities exclusively for their workouts.

Simply put, climbing offers something that other workout routines lack. Many VEM members find that climbing alleviates the boredom of some traditional workouts. As the climbing “routes” are constantly changing, the variation of moves and climbing sequences used is also constantly changing. As such, VEM members always have new climbs to explore and many new ways to challenge themselves and relieve stress.

“I have been climbing for 29 years and have been involved as a member of VE for the majority of that time frame,” says Schwab. “I am a former U.S. Parole Officer with the Federal District Court in Minnesota. It was a high-stress job and I used indoor climbing to prepare for the outdoor climbing trips I went on as a stress-reliever while working. I retired from that gig in 2010 and have never looked back.”

VEM welcomes all members of the community in a non-judgmental and very open environment, even hosting Lavender’s GLBT open climb night on May 16. “I personally have worked with nearly anyone you can think of from every walk of life,” Schwab says. “I don’t see any reason to exclude anyone for any reason and feel like were it not for climbing I wouldn’t be the person I am. We are all born climbers and all started to climb before we could walk. Everyone deserves a place to climb.”