A bird’s eye view of an assembly at First Unitarian. Photo by Joe Szurszewski Photography

A bird’s eye view of an assembly at First Unitarian. Photo by Joe Szurszewski Photography

“It’s like a sing-a-long, a TED talk, a poetry reading, and a concert,” Jim Foti, assistant minister at First Unitarian grins. “And a meal. There’s always a lunch afterwards.” Jim is describing a typical assembly at First Unitarian in Loring Park. “We give people the good parts of religion without asking you to believe anything,” explains Senior Minister, David Breeden. And it sounds pretty good: snacks, music, and something interesting to think about.

The Unitarian church has a long history of supporting the GLBT community. From current work with groups like JustUs and historical involvement in the first Pride parade in 1972 and work with the Invisibles in the ’60s and ’70s, GLBT rights have long been a priority to the Unitarian church. Jim estimated that about half of the weddings he performs at First Unitarian are gay weddings. Before same-sex marriage was legalized, the church regularly performed commitment ceremonies, a tradition that stretches into the 1980s. There are GLBT people represented in the clergy, staff, and run of the mill church members at First Unitarian. Bathrooms are gender neutral, the church is intentional about not dividing groups by gender, and the church recently made pronoun pins for people to make preferred pronouns easily accessible.

Outside of its own walls, First Unitarian works hard in its community. “We’ve worked alongside Planned Parenthood since the beginning”, says David. He went on to describe several other programs at the church, which support causes like racial justice, homelessness, gun safety, prison ministry, and more. 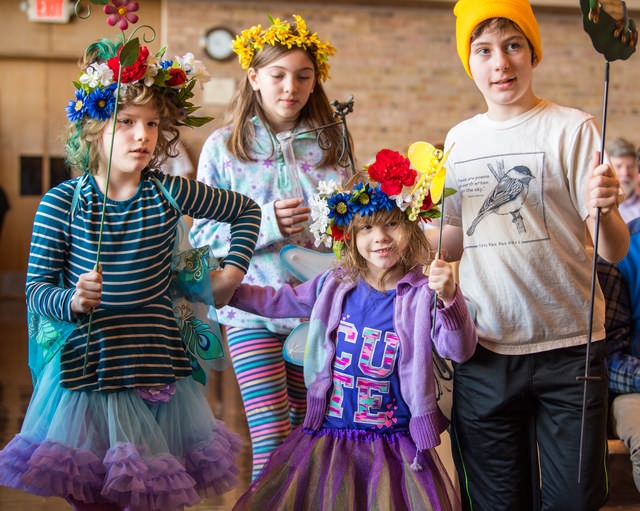 Kids with flower crowns in the Spring at First Unitarian. Photo by Joe Szurszewski Photography

Jim would probably encourage all of us to visit First Unitarian regardless of the political climate, but especially in “trying times” like these, when our country is “fighting homophobia, totalitarianism, racism, transphobia, and authoritarianism”, seeing “smiling faces” every Sunday makes a difference. “The work is ours to do,” Foti says, “there’s not going to be a miracle,” but joining forces with like-minded people is empowering and creates change.

Despite not following a religious creed, there are ceremonies and traditions in the Unitarian church. When babies are dedicated at First Unitarian they are assigned “guide parents” rather than “god parents” and are gifted with a thornless rose. Graduating high school students receive a rose with thorns in acknowledgement that the community cannot always protect its members from the trials and tribulations of the real world.

The Unitarian Church provides educational resources and allows its members (both children and adults) to make their own decisions about their beliefs. And if members just want to attend for the social hours and the sing-a-longs, that is okay, too.

Allison Wyeth, the church’s director of religious education, told me that there is a joke that “Unitarians are atheists with children.” Although the stereotype certainly does not apply to every Unitarian, there is a nugget of truth to the joke. Finding a safe place for kids to learn and grow in community is invaluable. Allison aggregates the curriculum for kids ranging from preschool to high school. “It’s all age appropriate,” Allison explains. The content ranges from comparative religions to racial justice to human sexuality and more. Through it all, the young people of the church are encouraged to engage in self-discovery and learn about the world around them respectfully and with open-hearted curiosity.

There are many learning and social opportunities for adults, too. Book clubs, the aforementioned social-cause oriented groups, a knitting circle, a series of tai-chi classes, and more are all available through First Unitarian.

If you want to “demystify” the First Unitarian experience before checking it out in person, Jim suggests streaming a talk or two on their website (firstunitarian.org/category/podcasts), but most of the community would agree that you will not get the true experience until you attend an assembly. The community, the music, the food, the friendly faces, and that breathtaking sculpture garden view are something that you can only experience if you show up on a Sunday.

So if you do not already have a community to hold you up in your times of personal struggle, to give you the tools and the opportunity to fight for good during these difficult political times, and to offer you a weekly sing-a-long, First Unitarian might be exactly what you’re looking for.