Uniquely Ours: Jack and Brian 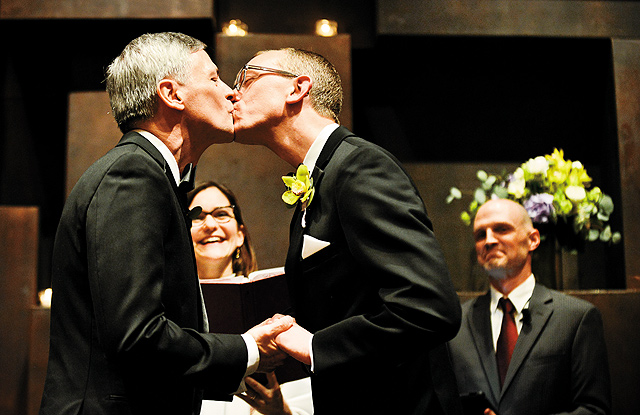 Jack Thompson and Brian Forney had a common employer (Silicon Graphics, Inc.) but had never met. The two were even each a member of Minneapolis-St. Paul Frontrunners (a GLBT running/walking group), but it wasn’t until other Frontrunners members had told Jack about another runner who worked at SGI that they were destined to meet. Eventually, both men were at the same run and met, becoming friends and eventually a couple. Brian and Jack managed to last over six years before putting that Frontrunners experience to good use by walking down the aisle.

Marriage had been on Jack’s mind for some time, having started the conversation several years before proposing. Brian, not being a big production person, wasn’t interested in the traditional wedding and was mostly interested in the legal portion of marriage; he felt committed to Jack without the need for a public pronouncement.

On Election Night 2012, the two attended the Minnesotans United election night party at the RiverCentre after volunteering all day for Get Out the Vote efforts. The couple decided to leave before the vote on the amendment was called and, while walking to their car, Brian turned to Jack and said that, if same-sex marriage became legal in Minnesota, he would marry Jack. To which Jack responded with a smile and a kiss.

“Brian’s offer was all the incentive I needed to join the boards of Minnesotans United and OutFront Minnesota so I could do everything possible to win marriage,” Jack jokes. Active for several election cycles as the treasurer of the OutFront Minnesota political action committee, it was a natural next step for Jack. As the history books note, marriage equality passed in Minnesota and Brian and Jack began making preparations for their wedding.

“We got recommendations from friends for everything but the venue, caterer, and invitations,” Jack says.  For the venue, the couple looked at ten locations, all in the city of Minneapolis, starting with the McNamara Alumni Center at the University of Minnesota. “We were struck by the Johnson Great Room at McNamara as a beautiful space for a wedding,” Jack adds. “And the atrium space looked like a terrific place to throw a party. We also found that the Heritage Gallery would work very well for a smaller family dinner before our wedding.”

Honing in on McNamara as the venue (And beautifully so! It was included on a list of “22 Coolest Places to Get Married in America” by Buzzfeed) means the couple simultaneously decided on a caterer. D’Amico & Sons came as a package deal with McNamara as the sole caterer for the venue. Similarly, other vendors seemed to serendipitously fall into place as well. The couple met Sarah Glad from A Milestone Paper Co. at an event being hosted at The Event Gallery, an encounter which resulted in wonderfully designed invitations and stationery products.

As easy as deciding on vendors was, so too was creating a look for the ceremony which reflected both men. “We think this came organically,” Brian shares. “We’ve been together for six-and-a-half years and have lived together for all but one year of that. Those two pieces may have helped.” Notably, the ceremony space is architecturally modern, which the couple says suits both of their tastes.

Keeping in the spirit of simple and easy decisions, the couple settled on black tuxedos without vests or cumberbunds. Completing the simple and elegant look, both men wore white shirts with black bowties. With classic attire, the couple made deliberate choices to make the ceremony uniquely their own. Starting with a service used in the Episcopal church for blessing same-sex unions, they both edited it down a bit to reflect their personal styles, also choosing non-traditional readings and music that suited them. “We processed into the service using a Sigur Rós song, ‘Hoppípolla,’ and recessed using another Sigur Rós song, ‘Mea Blóanasir,’ which is the coda for ‘Hoppípolla,’” Brian shared.

“The two families even got in the act for the music, with our nephew, Chris Daum, from the Thompson side leading live music at the reception and our brother-in-law, Marc McDonald, providing DJ services,” he continued. “All of these elements were very uniquely ours.”

All photos by Ben Garvin. 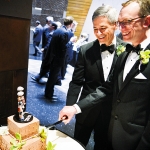 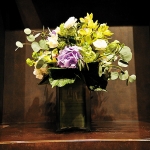 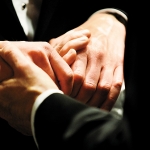 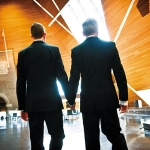 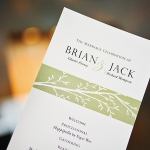 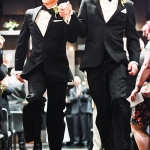 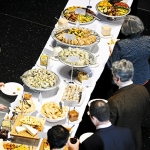 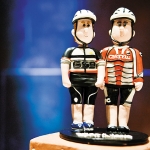 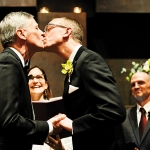 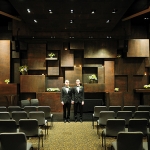 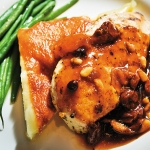