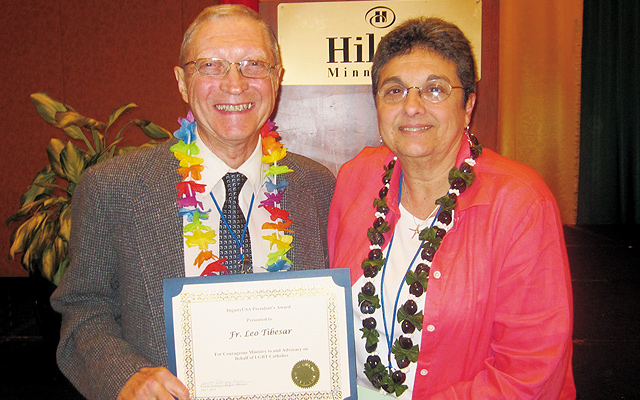 With the theme “Let Justice Roll Like a River” tying together a cornucopia of activities, DignityUSA held its 21st biennial convention for the first time in the Twin Cities July 4-7 at the Hilton Minneapolis. Founded in 1969, the organization serves GLBT Catholics throughout the United States. The local chapter, Dignity Twin Cities, established in 1974, hosted the gathering.

A highlight of the convention was the concluding event on July 7, at which Leo J. Tibesar, who has been active in inspiring the local and national GLBT community for three decades, received the DignityUSA President’s Award from the group’s president, Lourdes Rodríguez-Nogués. In recognition of his many years of service, the award read: “For Courageous Ministry to and Advocacy on Behalf of LGBT Catholics.”

An avid bibliophile, Tibesar is a chaplain at the University of Minnesota Medical Center-Fairview in Minneapolis. He was a board member of DignityUSA for several years. He also served on the board of the national Catholic Association for Lesbian and Gay Ministry. For 10 years beginning in 1987, he organized the annual Twin Cities prayer service for people with HIV/AIDS.

At the closing ceremony for the convention, Tibesar delivered this inspirational Meditative Prayer:

We are threads of many colors –
Gifted and free –
Creating for the earth
A shared diversity!

With threads of same-sex love
Embraced for all to see –
Quilting a Home of the Brave
In a Land of the Free!