Through These Eyes: Fifteen Years Married: A Chat with the Fladmarks 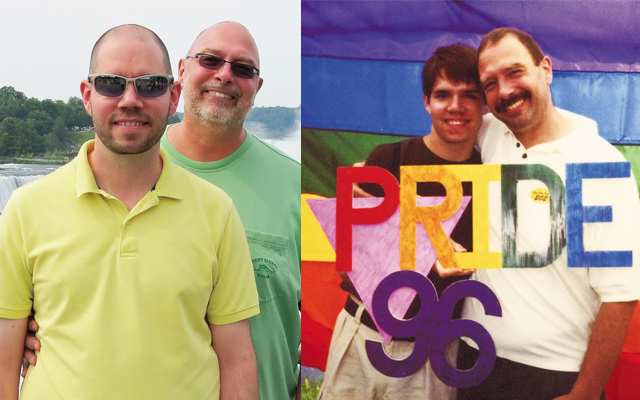 Jerry and Travis Fladmark have been married for 15 years. We chatted with them about their marriage and marriage equality.

Justin: How long have you been together? In what year did you marry?

J: Tell me about the proposal.

J&T: Jerry said for years before we met that he was going to marry the man sitting across the table from him on his 40th birthday. He kept his word. He got down on one knee at the Table of Contents restaurant in Minneapolis between the entrŽe and the dessert. 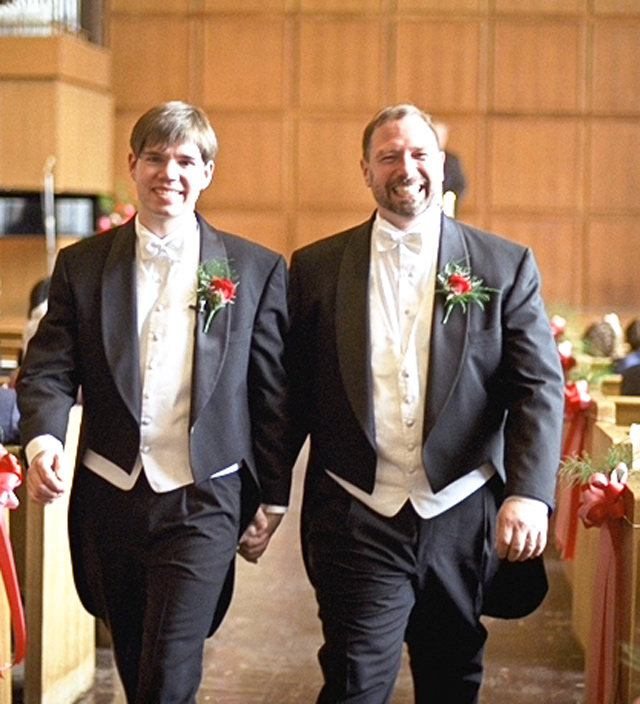 J: When you announced your marriage, how did your families take the news?

J&T: Overwhelmingly excited for us. There were a few people that were less than excited, but we didn’t experience any outright rejection. It was very new to folks in 1996. In fact, when we put our engagement photo in the Star Tribune, it caused a big stir – a same-sex engagement announcement had never been done before. We were called by radio stations for interviews. Conversely, we were not able to put our anniversary photo and announcement in the Star Tribune 10 years later.

J: You’ve been married for 15 years. What’s your secret? What’s the recipe for longevity in a relationship?

J: Is there something more than love to consider before getting married?

J&T: Where you are at personally in life. You have to be able to love yourself before you can really love someone else.

J: Have you ever felt discriminated against because of your marriage?

J&T: We were discriminated against when Trav changed jobs. Because of DOMA, we were unable to keep Jerry insured through COBRA. Since he has diabetes and high blood pressure, we were nervous that he would be excluded under a pre-existing condition clause.We were also discriminated against on our taxes, paying higher taxes on income and healthcare when our marriage wasn’t recognized.

J: What did it mean for you when the Minnesota State Legislature legalized same-sex marriage?

J&T: It meant more than almost anything in our lives. To finally have the “official” stamp of approval and equal recognition was so heartwarming and endearing. Of course, the our more practical side was thrilled with the money we would save in taxes and healthcare costs. We now feel fully a part of our community and more secure as we face life’s inevitable uncertainties.

J: Any advice for planning a wedding?

J&T: Keep it within your budget or save money first. Financial issues are one of the biggest issues that seem to come up for couples. There’s no sense starting your marriage in debt from a wedding. Other than that have fun with it and make it all about your love for one another. It is your day! We discussed the wedding day with our close friends and really let them take over big parts of the day. So, we could relax and be present in the moment.

Another secret to longevity? They’ve never raised their voices in an argument, though Jerry’s hearing does require it on other matters…