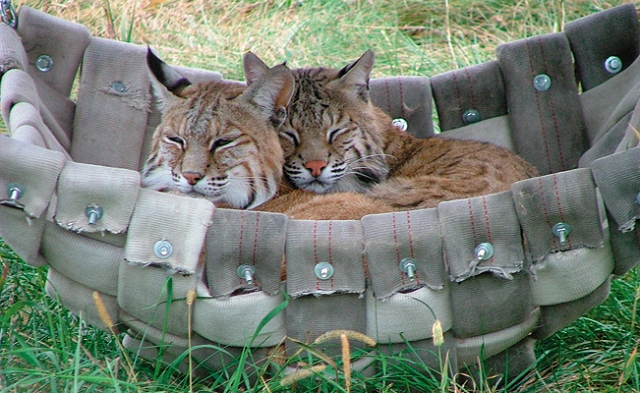 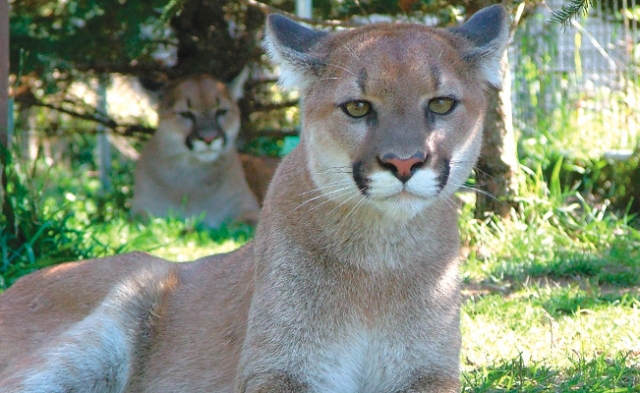 Wildcats in their sanctuary. Photos courtesy of The Wildcat Sanctuary and PCML Photography

The scene in Zanesville, Ohio last October was like an animal Columbine. 49 animals including bears, lions, tigers, wolves, and a baboon all had to be shot and killed by authorities after a man freed them before committing suicide. Earlier this month, two chimps, the “pets” of a couple in Las Vegas broke out of their enclosures and were shot when they dared to roam free in the neighborhood. What did they think they were—wild animals or something? These two stories may be extreme examples, but as I have recently learned how extreme the problem of exotic animals as pets is after visiting Tammy Thies in Sandstone, Minnesota.

Tammy runs the Wildcat Sanctuary, currently home to 115 animals from lions, tigers, cougars, and lynxes to a variety of hybrids (wildcats mixed with domestics). She is dedicated to the cause of stopping the practice of owning exotic animals as pets, rescuing those that she can, educating on appropriate pets, moving legislation to strengthen the laws surrounding animal breeding and owing of exotic species, and yet she still found time to give me a tour of the “off-limits to visitors” sanctuary—off-limits because, as Tammy tells me, this is in the best interest of the animals as they have almost all gone through trauma and also to deter those wanting to “dump” their unwanted “pets” at the front gate. In fact, this is how many of the animals come the sanctuary, because their owners can no longer care for them. For many, getting a wild animal seems like a great idea but they don’t realize what it will take and just how large or powerful their cute furry kitten will become, or how their behavior will change when they become sexually mature. 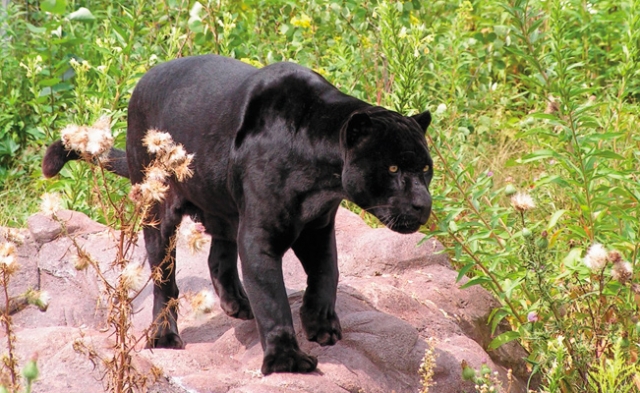 Tammy was not always roaming across the 40 acre grounds beaming an optimistic smile in between recounting some the most horrendous circumstances surrounding the majestic creatures she now lives on the property with (commuting home to her husband in the cities when she can.)  As a marketing executive in Atlanta in 1996, Tammy first crossed paths with a tiger cub and a leopard during a photo shoot. “And I was smitten just as you were today,” she says, sitting at the dining room table at the house on grounds that doubles as an office/headquarters. Learning how the animals were treated and that they were kept in 10 by 10ft cages, she began volunteering at facilities that housed the cats and soon learned some harsh truths. “So many of these people were using these animals to their benefit, and when they didn’t perform anymore, the animals got pushed aside.” It was in an attempt to save a tiger she’d met on a shoot that Tammy met Alfred Hitchcock muse and mother to Melanie Griffith, Tippy Hedron, who has a sanctuary in California. Inspired by the quality of Hedron’s sanctuary, Tammy started her own in 1999, eventually moving back home to Minnesota, opening the refuge in Sandstone in 2006.

Titan, a massive male tiger, lolls on his back, flipping in the grass and soaking up the sun, the very picture of contentment. Nearby, his only “hunter” is his girlfriend Lilly, who watches him as she peers through the blades several feet away. Soon she pounces, and Titan playfully bounces away only to double back and chases her as she gallops away in a gleeful display of flirtation. Titan and Lilly’s lives were not always so carefree. Titan was rescued back in 2006 after his brother, Tango, suffering from starvation, ate their owner Cindy Gamble not far from where the sanctuary now sits. Tango was destroyed, and Titan was placed at the sanctuary. It took a long time for Titan to recover from the trauma, says Tammy, and the company of Lilly, who also has a dark past—including near starvation which forced her to eat her cage mate—has seemed to have helped immensely. The two were placed together in 2010 and the love affair, though somewhat unbalanced, Lilly being obviously more smitten, has provided a security and companionship neither cat had before. Even in the animal kingdom, it seems love can help heal all wounds. 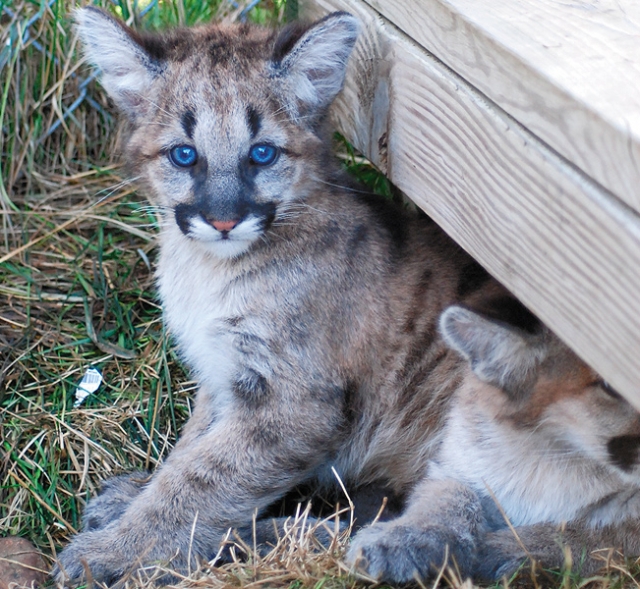 We crunch past the love-birds’ cage to a habitat where a sleek, earth-colored cougar named Tasha rounds the high grass and gracefully lopes along a fence, watching us intently. To my surprise, she answers Tammy’s whistle with a whistle of her own, a bird-like chirp that one would not expect coming from such a seemingly friendly yet imposing looking animal. As we watch the cougar smile and dart though the grass, I remark on its beauty, and Tammy nods in agreement but makes an important point. “I can guarantee if I went in there I wouldn’t be coming out.”

And that’s perhaps the dilemma, the cats look so sweet that one can be lured into a false sense of security where cuddling the creatures seems harmless. But Tammy recounts the harm that can come from close contact (humans are not allowed in pens at all with the wildcats at the sanctuary) and tells me about an acquaintance who was an advocate for keeping wildcats as pets. “She is about the fourth advocate for that organization…the other ones…” she pauses, “…aren’t here anymore.”  Or the man wrote a book on how to privately own a wildcat with a second chapter titled “How to Not to Get Killed by Your Cats.” Unfortunately, this did not prevent him from succumbing to that very fate.

As we hike over to the habitat housing of white tigers she tells me she won’t take me to anyone who is very aggressive. (Sounds good, Tammy.) Sierra’s regal head pops up from the hammock she is lounging in, and she affably trots into her indoor pen where she can relax in a cool place and we can visit with her up close but safely.  Once again, I am in awe of how gorgeous the cat is with caramel stripes running along snow white fur. Further down in the habitat lives Nikita, equally breathtaking yet with a very different temperament. Relatively new to the sanctuary having just arrived a few months ago, Nikita was a photo shoot cat being constantly moved around to various fairs and chained down while people took her picture. If people stop and look at her she starts hissing, which is exactly how she reacts to my presence that day. I keep my camera in its case. Tammy does not take me close to Nikita’s enclosure, not just for my mental well-being but for Nikita’s, which brings me to a point Tammy makes more than once during my visit. “It is not about what best for us humans. It’s what’s best for the animals.” 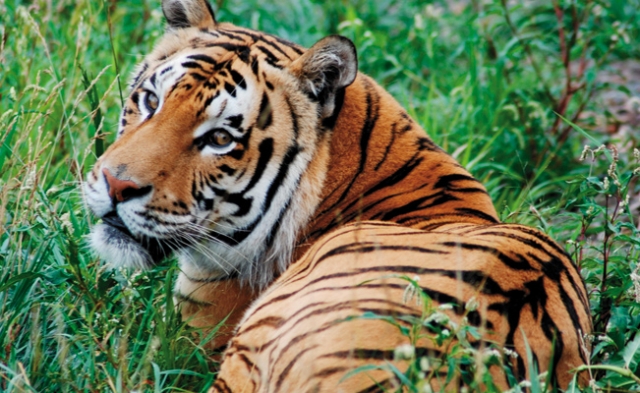 And what’s best for the animals is tougher laws aimed to protect them and the humans they may come in contact with is what Tammy tells me after the thorough tour which includes a hybrid habitat, an onsite medical room where the cats are provided routine care by visiting vets, and a feed storage room where specialized diets are prepared which include the necessary vitamins to insure a healthful life for the wildcats. In Minnesota since 2005, the law which Tammy helped lobby for prohibits the owning of bears, wildcats, or primates as pets, but several states such as nearby Wisconsin don’t. Tammy admits a patchwork of better state laws have surfaced but stresses the need for regulation at the federal level such as HR-4122, The Big Cat Safety and Public Protection Act which would ban the breeding of big cats outside of the Association of Zoos and Aquarium system, a non-profit organization which regulates the treatment and breeding of exotic animals. The bill has yet to pass, in part says Tammy because of opposition from organizations with big pockets such as Ringling Brothers Circus. And the laws that are in place can be hard to enforce as Tammy says, “A lot of this is underground. A lot of people have their pet bobcat in their basement.”

But taking the cause out in the open and working toward more exposure of what is happening in the world of exotic pet ownership and breeding in the country can help change that. With only 4500 tigers left in the wild, the irony that there is a surplus of tigers in captivity in the US of 6 to 10 thousand is astounding.  “We are not the only ones that have rights in America, to me every living being should have rights and they need to be considered,” says Tammy in her passionate but even-keeled manner that belies none of the ‘crazy cat lady’ inferences one might impose. “It’s really inspiring to be part of something good,” she continues. “In the rescue business, people feel there is a lot of negativity and sadness, but I always remind people it only takes one person to abuse an animal but it takes a whole group of people to save one. “ She smiles and adds a final fact. “We rely on donations and can only help the animals as much as people will help us.”

To learn more about the Wildcat Sanctuary and how to help, please visit: www.wildcatsantuary.org 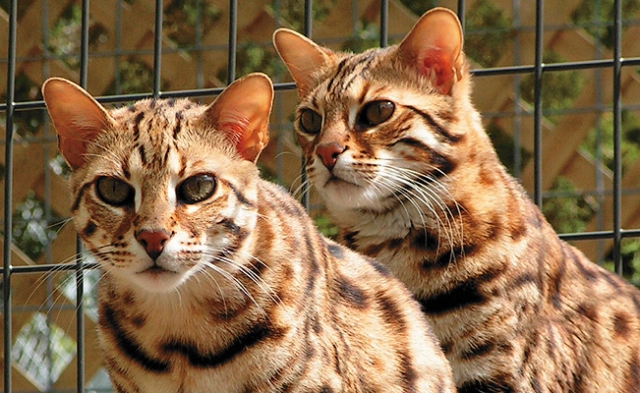