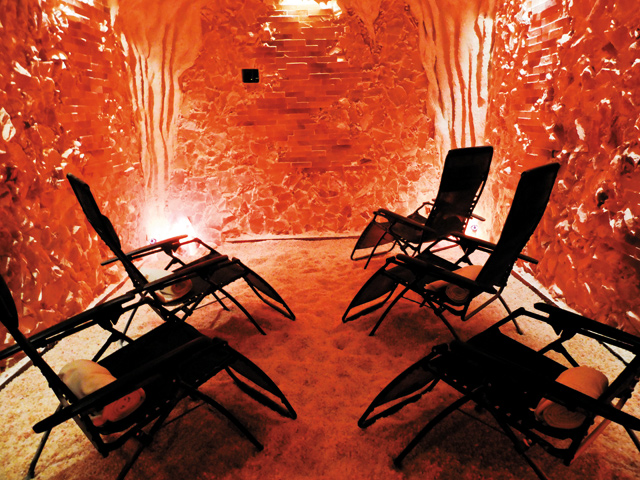 We’ve all experienced that glorious moment when suddenly the ability to breathe is restored as our sinuses drain after suffering through a cold or flu bug going around. What if there were a way to experience this euphoria naturally, without the assistance of drugs? The total sensory experience known as salt therapy is an age-old alternative therapeutic remedy to treat many respiratory ailments.

Scott Wertkin, the owner of The Salt Cave (Minnesota’s first therapeutic salt cave), stumbled on the idea of salt therapy somewhat randomly. While on vacation with his wife, Wertkin was watching television and saw a news story regarding salt therapy and its benefits. Salt therapy (also known as halotherapy), has been used for centuries to alleviate symptoms of asthma, allergies, respiratory problems, anxiety, and other ailments along with skin benefits.

Having both suffered from sinus issues, Wertkin and his wife began researching, talking to other people, and looking at other caves around the US. “I mean, really, my wife and I couldn’t get it out of our minds,” he says. “We kept trying to find out as much informations as we could and, as we continued, it just seemed more tangible and more realistic and something that would be beneficial.”

You’ll notice the difference in the caves compared to other treatment centers immediately. Your bare feet slide across the pebble-like floor covered with 4,000 pounds of Himalayan salt crystals. The walls around you are lined with pink and orange-hued bricks of salt. As you slide into one of the zero-gravity chairs, you hear soft, soothing sounds streaming from overhead speakers. As you relax and your breathing slows and deepens, you inhale air pumped with pharmaceutical-grade salt. After a few minutes, you touch your tongue to your lips and taste salt.

The Salt Cave is a one-of-a-kind place designed to promote and support relaxation and general wellness. The walls and floor were constructed by hand using more than six tons of pure Himalayan crystal salt, and the air in the cave is treated by a specialized halogenerator, which infuses the air with a dry aerosol containing tiny particles of pharmaceutical grade salt.

According to Wertkin, clinical studies have shown that when people inhale this type of salt air, it can help to stimulate the natural ability of their respiratory system to reduce inflammation, fight infection, clear blockages, and reduce discomfort. Visitors typically spend each 45-minute session relaxing in a comfortable zero-gravity recliner. Alternately, special group sessions might include yoga/meditation or storytelling for kids. In all cases, the primary source of respiratory benefit is the inhalation of the cave’s specially treated salt air.

Experiencing The Salt Cave, Wertkin says, is unlike any other. “There really isn’t a place that encourages you to sit in the dark and try to meditate and breathe,” he says. “There are forms of yoga that are really focused on breath and relaxation, that would be the closest, but that involves some movement. But in this, you’re stationary.” 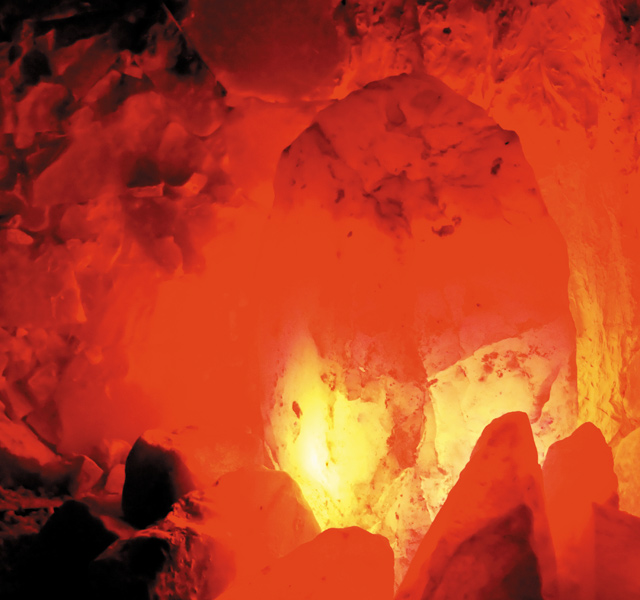 Stationary? Yes, while the cave offers yoga and other, more active, sessions, the primary ideology behind The Salt Cave has become relaxation and meditation. “I think people need help meditating; people aren’t going to do it on their own. It’s like exercise, you need the push,” Wertkin adds. “As we’ve evolved the meditation and relaxation, the stress piece has become a little more important. At first I didn’t want it to be relaxing. I wanted to make sure there was no placebo effect; I wanted to be honest with people and make sure it was valid. Over time I’ve witnessed how difficult it is for people to relax—that negates the placebo. Really relaxing yourself is hard. People will nap, but that’s not meditating.”

Any interested visitors shouldn’t be deterred; nearly everyone is able to take in the benefits of the cave. “We’ve had lots of pregnant women come in,” Wertkin says with a smile. “What we tell people is that the therapy is like being at the beach, just a little bit more concentrated. If you can spend time at the beach, you should be fine in the cave. If you are prone to especially bad asthma attacks, you might not want to expose yourself, but other than that, anyone should be able to do it.”

As with any new experience, the question lingers: any advice for first-timers? Remarkably, Wertkin says that the people who come in for their first time at the cave have done their research. Most people come in having looked at The Salt Cave online and know what they are getting into on some level, Wertkin shares, before adding his own advice: “Come in prepared to breathe and relax.”