The Road to Hell…and Back: Out & Sober Minnesota Defeats Addiction with Connection

We’ve been told the road to hell is paved with good intentions, but all English majors know the road to hell is paved with statistics, and the Pride Institute would agree. The Pride Institute tells us that members of the GLBTQ community are more likely than non-gays to struggle with alcohol and drug addiction and less likely than non-gays to seek help once they do. And the statistics are even more dire when talking about queer youth. The problem, ultimately, is a feeling of emotional disconnection from others, and this disconnection can drive members of the GLBTQ community to drink, literally. Fortunately, this disconnection can be undone by one of Twin Cities Pride’s 2016 Community Champions of Pride: Out & Sober Minnesota. 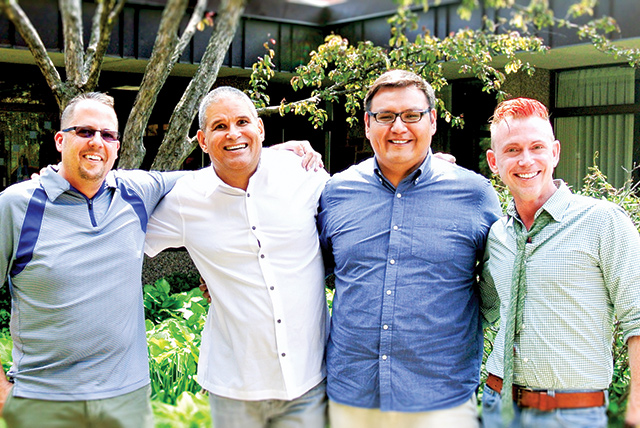 According to its website (www.outandsoberminnesota.org), Out & Sober Minnesota is “an organization dedicated to reconnecting LGBTQ addicts and alcoholics with the community and helping them build healthy, clean, and sober networks.” The means to that laudable end are social events carefully crafted by a volunteer board of directors. The whole spectacle might look somewhat frivolous from the outside, but the stakes are nothing short of sobriety itself. Kevin Champion, Out & Sober Minnesota’s board chair, insists, “It is important for people in recovery to build a network of sober friends and have fun.”

Fun serves as Out & Sober Minnesota’s core, but the group came into being to address a dreadful problem that first reared its head in the era of MTV and Ronald Reagan. “In 1984, many twelve-step recovery groups did not accept LGBTQ people,” Champion recalls. So in that year, the Twin Cities Gay and Lesbian Roundup was born; it was intended as safe haven for GLBTQ addicts who had been deflected by Alcoholics Anonymous.

In 1998, a parallel group, GLBT in AA, came into being “to help plan for the International Conference of Alcoholics Anonymous which was held in Minneapolis in the year 2000,” according to Champion. After multiple permutations, this group melded with its predecessor and took on the current name Out & Sober Minnesota, as a signal that people suffering under any addiction, not just alcoholism, were welcome. “This change was part of an effort to make the organization more inclusive,” Champion asserts. “We want to make sure that all people in our community are included, not just those who identify as GLBT.”

This inclusion becomes obvious to members who engage in Out & Sober Minnesota’s social events, which run the full gamut of yin and yang. Recent examples are a meditation workshop (an introduction to the inner workings of inner peace), snow-tubing (an introduction to the outer workings of winter gravity), and Spring Fling (an event designed to match sponsors with sponsees via an unlikely Dating Game format). “If people do not have fun, make friends, or feel like they are part of something, it is hard to maintain long term recovery,” Champion assures.

That’s not just ivory tower theory of which the chair speaks; incidentally, it’s hard-won experience that makes Champion’s involvement with Out & Sober Minnesota so personal. “When I entered recovery, I had one sober friend,” Champion explains. “I started volunteering with Out & Sober Minnesota and gradually built connections and made friends. People who are new to recovery are faced with the challenge of socializing, making friends, and having fun without the aid of substances.”

One of the happy side effects of these sundry, substance-free excursions is that they do away with certain preconceptions about the recovery community and its members. “There is a belief that many recovering addicts and alcoholics have that if they do not use substances, they cannot have fun and make friends,” Champion observes. “This belief is especially true in the LGBTQ community, but we are a very social people.” In further describing Out & Sober Minnesota, the Chairman adds, “We are not a twelve-step group. We support all forms of recovery.”

That support will be on full display with Out & Sober Minnesota’s participation in this year’s Pride festival.  Reports Champion, “This is our second year as participants in the Pride parade as well as the Pride festival. This has become one of our biggest events.” In fact, Pride represents a kind of meta-event that allows Out & Sober Minnesota to discuss its other events with the general public.

“We love having a booth in the park,” Champion enthuses. “We use this as an outreach opportunity. We have volunteers from the LGBTQ recovery community staff the booth and talk about their experiences with recovery and let people know about our activities. One of our goals is to reach out to all members of the LGBTQ recovery community, or those considering recovery, and let them know they are welcome here.” In other words, Out & Sober Minnesota’s outreach represents another form of reconnection.

And the reconnection will manifest in one final way when members walk a road very different than the one that brought them there, that of the Pride parade route. “We love the fact the members of the LGBTQ recovery community come out to march with us in the parade to show their sober pride,” says the Chairman.  “We want people in the LGBTQ community at large to know that if they choose to stop using drugs and alcohol, they can have just as much fun — maybe more — in our vibrant recovery community.” Ultimately, the key is bringing people together. Champion concludes, “There is a quote by Johann Hari that reads, ‘The opposite of addiction is not sobriety, the opposite of addiction is human connection.’ This is why we do what we do.”