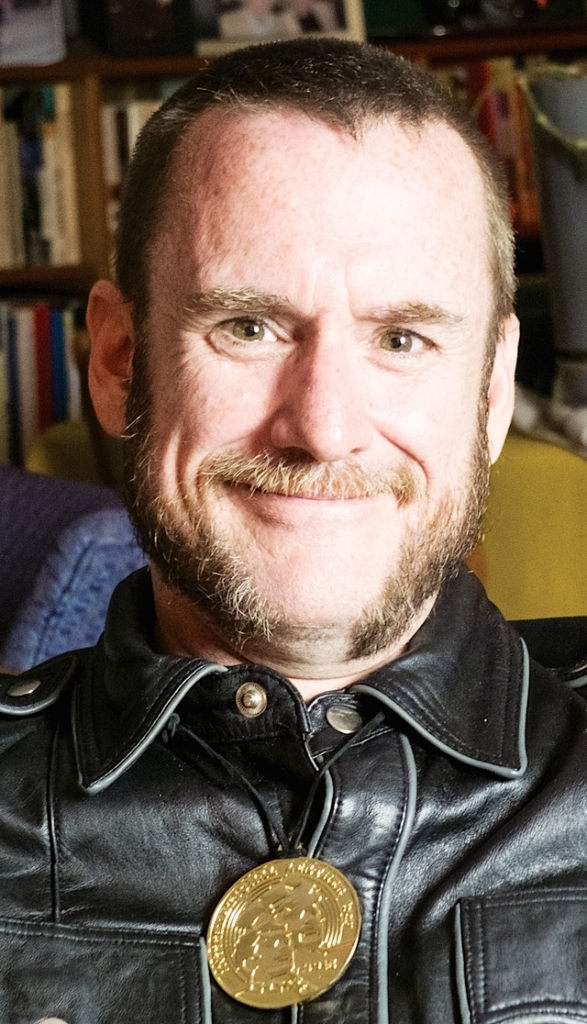 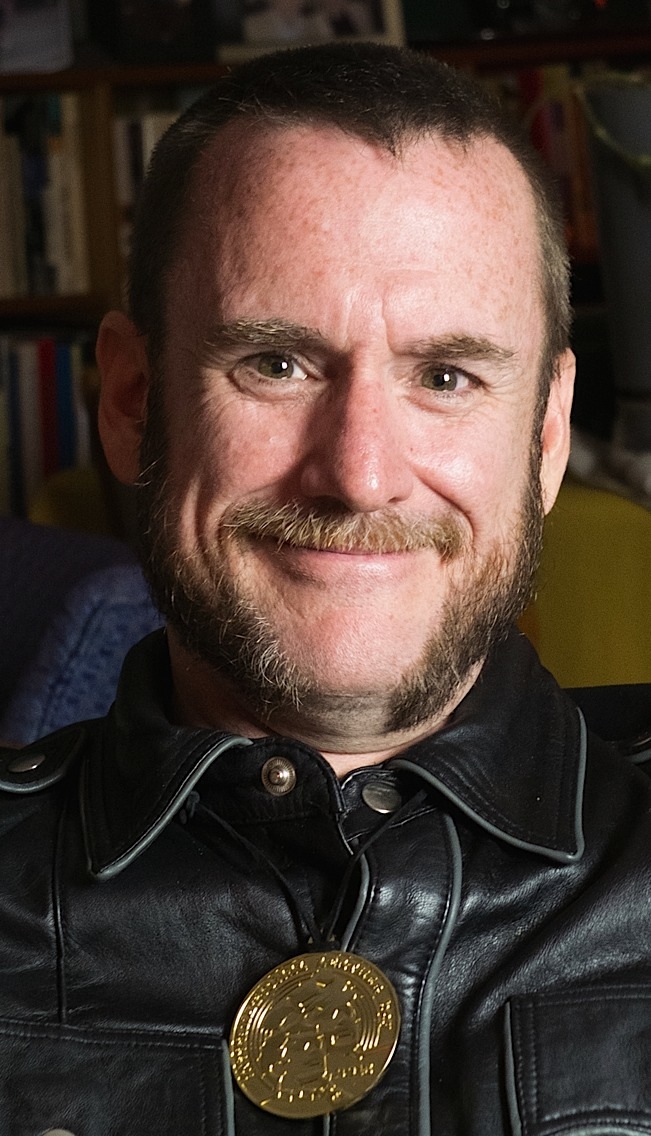 He’s a leatherman, a bootblack, a pup, and a great hugger. He’s Tim Hotchkin, and now he’s also International Leatherboy 2015, winning the title in Dallas on Sept. 5. This is big news — it has been quite some time since Minnesota was home to an international-level leather titleholder.

Shortly after Tim returned to the Twin Cities from Dallas, I had the chance to ask him a few questions:

Where did you grow up?
Tim Hotchkin: I grew up in a little town called Grinnell, Iowa. It’s a nice little town. It had a good college in the middle of it, so I got exposed to weirdos and hippies and stuff at an early age.

When did you discover leather?
TH: I told this story as my introductory story at Great Lakes and International Leatherboy. I was twelve years old, and I had broken into this cabinet in my dad’s workshop, and I found some Playboy magazines. And there was this picture of this guy, and he was cuffed, and he had a collar, and he was restrained to this bench, and it was just amazing! It riveted me, that picture. I can still see it in my head. I wish I were a better artist, I would sketch that sucker down.

You’re into bootblacking.
TH: A little bit. I like to take care of my own leather. The guys and the women I’ve met who are bootblacks are all great folks, and I just picked up tips along the way.

You are a pup named ASH! And that’s all capital letters with an exclamation point. Where did “ASH!” came from?
TH: It’s an acronym; it stands for Assertive Submissive Hound-dog, and I thought that described me very well.

What attracts you to puppy play?
TH: The energy of it. Just the freedom. My sirs, who will beat me up relentlessly in the dungeon, know that I’m off-limits in the puppy pit. I get to run around and play and wrestle with guys and not have to think about anything. It’s nice.

Don’t people already know how to hug?
TH: See, that’s Hugging 101. Everybody knows how to hug. Putting your arms around somebody for three seconds and then patting their back to let ’em know you’re done hugging ’em, that’s easy stuff.

So what’s Hugging 201, then?
TH: 201 is all about nuance, and putting emotion into your hugs, and talking to people while you’re hugging them, and maybe a little massage, just getting closer to them. Hugs are great; they set off a lot of chemicals in your body that are really positive, and help you form bonds and relieve stress. It’s a pretty amazing thing that I think a lot of people take for granted.

You are a leatherboy. What does that mean to you?
TH: I think I define “boy” very differently than a lot of people. I do love service, and it’s a huge thing to me. I think a lot of boys start there. My energy kind of leads me to a different path. I always think of boys on the playground, kinda running around and being a little bit of a smart-ass, and maybe taking a beating because they’re a little bit of a smart-ass. That’s the kind of boy I identify as—

A brat.
TH: A brat, just a little bit—but, you know, with a good heart.

What was the Great Lakes Leatherboy competition like?
TH: Oh, what a great weekend! I was so relaxed going into it because I’d prepared pretty well. I was amazed at how much freedom we were given as contestants to just kind of be ourselves. We were expected to be where we were supposed to be 15 minutes ahead of schedule. But other than that I got a chance to play in the pool, and mosh with some new puppies, and just kind of play around.

And the International Leatherboy competition?
TH: It was nice. It was really well run. It was a little bit tighter ship than it was at Great Lakes. We still had some fun times, but for the most part I was focused on the competition. I made sure I was where I needed to be well ahead of 15 minutes ahead of schedule. I was ready for everything.

How did you prepare for the International Leatherboy contest?
TH: I prepared for it the exact same way I prepared for Great Lakes. I was going to be using the same fantasy, so I got a chance to practice with the people who were going to be in it. I practiced the speech until I knew it by heart, and knew the inflection I wanted to give. We did three mock interviews the Sunday right before I went. I was ready.

Tell me about the fantasy you performed at the contest.
TH: The fantasy is me encountering three Sirs at a bar, and bumping into all of them, which offends them. So they all take their frustration out on me in different ways. The first Sir bites me and punches my balls. The second Sir hits me with shock sticks repeatedly. The third Sir punches the hell out of my chest. And then, because it’s my fantasy, they all take me home to live happily ever after.

What kind of questions did you get in your interview?
TH: I got asked about the kinkiest scene I had ever been in, and when I answered that question the judges were pretty silent. Two of them were looking at each other and writing notes that had nothing to do with my interview — they had to do with something they were going to be doing to someone later. And one of the judges might have been drooling a little bit.

So what did you think when you won in Dallas?
TH: I had been down on one knee a lot over the course of the weekend, and my knee was getting sore. So, that final time on stage [at the end of the contest], I ended up going to both knees, because it was just gonna be better for stability. When they announced my name, there’s a great picture of me just slumped over, my shoulders are rounded, my fists are on the stage, and it’s kind of that moment of relaxation. It was an amazing relief. It felt great. It was what I wanted.

Now that you have the title, what do you want to do with it?
TH: I want to tell my stories. I want to get out there and engage people. I want to engage the guy who’s at the event for the first time, or the person who looks kinda nervous being there.

I have an Excel spreadsheet at home that has ideas that I’ve written down all year, and I have no idea what’s in it, because I’ve been busy doing other things. I know I have some ideas of what I want to do, and I’m already starting to make some plans. I’m gonna be pulled in a lot of directions, and I want to make sure I’m going where I need to be.