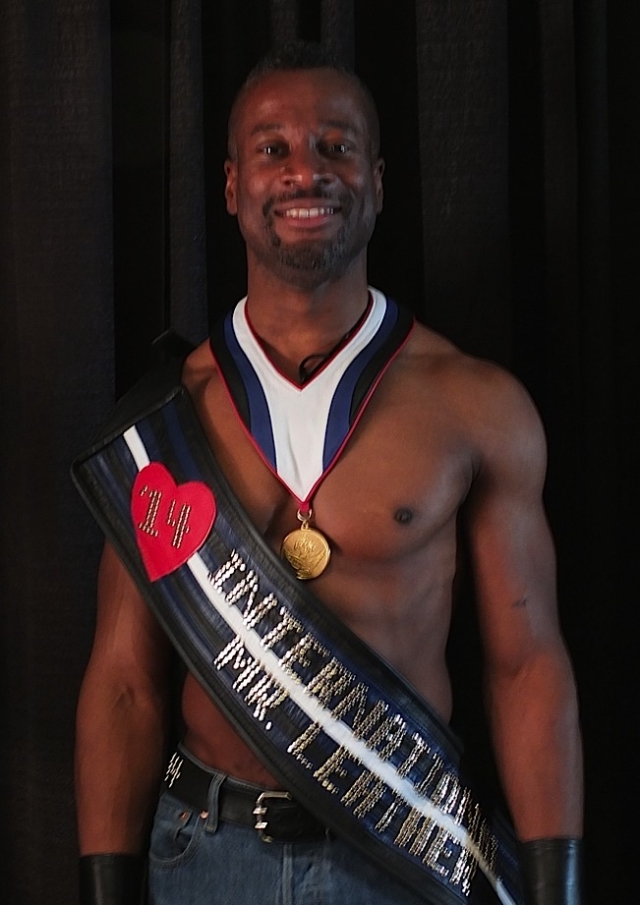 When Ramien Pierre, the current International Mr. Leather, was in Minneapolis recently as a judge for the Mr. Minneapolis Eagle contest, he graciously let me interview him.

Where did you grow up?
Ramien Pierre: I grew up in a little town called West Chester, Pennsylvania. I’m an only child, raised by a single mother who was working a lot, so I was a latchkey kid. I didn’t really play with other kids. I was mostly alone with books and ’70s sitcoms.

I am a product of public education my entire life until my junior year in high school, when I went to Westtown School, a Quaker boarding school, because of an Upward Bound program. I’m very fond of the Quakers. On my title vest, they were able to work some Quaker references into the art.

How did you get into leather?
RP: My first leather event was MAL [Mid-Atlantic Leather] in 2009. I had been interested in leather prior to that, but it was hard to figure out how to talk to people about it. MAL was my first time where I said I think I’m into leather, I think I’m into kink, and I sort of dipped my toes in the water. Then later, Onyx [a club for leathermen of color] was having their annual run for pledges, and after getting my toes wet in 2009, that was when I finally jumped into the pool by becoming a member of Onyx.

The Onyx thing led me to want to be a part of the larger leather community, and for me, the Mr. DC Eagle contest seemed like a great way to push and challenge and make myself commit to a larger group of people.

So you won the Mr. DC Eagle title and competed in IML. What was your IML experience like?
RP: Thursday evening, after orientation, I fell apart. I was in my hotel room, I was crying, and every horrible thing I was thinking about myself, every single self-doubt I could possibly have, was running in my head on a loop. My partner was there, watching helplessly while my inner critic just went berserk.

So it was a small miracle that the next morning I got out of bed, got into the shower, got my boots on. What did it for me was, I thought about my community back home at the Eagle, and I said, I don’t have to do this contest, right? They said I didn’t have to do it, so if I said now I wanted to quit, they would forgive me, right? They’d still accept me. And I realized, no they wouldn’t. They would talk about me all day. And that terror was more than—

All the other terror.
RP: Yes! Exactly! That was louder than my inner critic.

And then before I opened the door my boyfriend said to me, I’m really nervous about you going. But one thing I knew about IML was that, yes, it’s about being yourself, but there also is a bit of showmanship. People come from across the country and across the world, and they want to see this parade of masculinity and people embracing their sexuality and community. They want to see a show, and part of my job was to be a performer. And I said, I’m gonna get out there and I’m gonna give a good show. So I was having a really, really good time on stage.

When they called my name as the new IML, all I remember is getting up there and hollering. I was just so excited. I yelled like I didn’t have any good sense.

I have pictures of you yelling.
RP: And what you don’t know about me is I am not a yeller. That was very unlike me. That whole Quaker schooling thing? I’m a good fit for Quakers. I am quiet and reserved.

What do you do professionally?
RP: My full-time gig is arranging training for engineers at NASA, and my part-time job is doing corporate training. My previous careers were all in education—I was a seventh- and eighth-grade history teacher. I was assistant dean of students at a boarding school and at a small liberal arts college. I was a not-for-profit arts manager, I was executive director of a dance company, and then administrator for the education department at the John F. Kennedy Center for the Performing Arts.

And now you’re working on a doctorate at George Washington University.
RP: Yes, and what you can’t see on the audio recording is me hanging my head in shame, because I haven’t done as much work as I would like. It’s a doctorate in human and organizational learning. With my life and my charity work and the leather title, it’s been hard to stay on top of school.