The Lady is a Champ 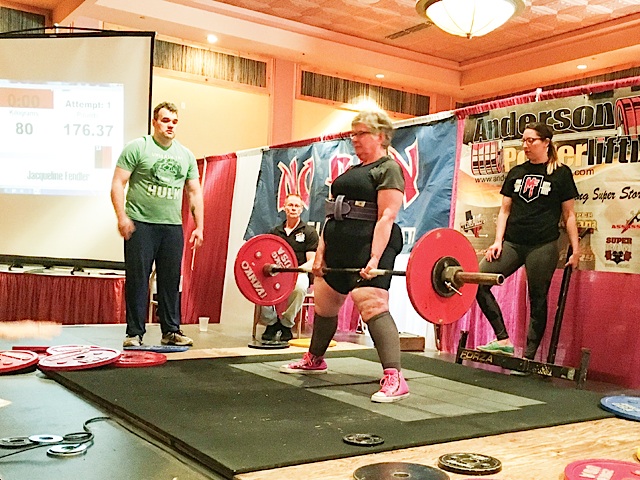 It’s November 2013, and a lifter is about to lift. Feet are planted beneath shoulders, toes are pointed due north.  Open hands descend beneath knees, then lock onto the knurled iron bar with a matching iron grip, over and under. Clavicles hover parallel to the bar which is complemented on either side by metal plates: 181 pounds of entropy, all told. The lifter doesn’t notice that the iron bar is as cold as a corpse.

That cold flutters upward on vulture’s wings as the lifter’s shoulders rise. The icy bar caresses shins, knees, and thighs, while hips thrust forward pneumatically. The base of the lifter’s neck drips acid, or seemed to, its tickling trickle burning gluteus, hamstring, calf, and heel from the inside out.

The weight is returned to the floor with a clatter that sounds like cosmic cymbals striking together. The spandex-clad assemblage laud the effort, the success, the transformation: the lifter is no longer merely a lifter. She is Jackie Fendler, affectionately nicknamed “The Hammer” by her many friends and admirers, and, at age 65, she has become the World Association of Benchers and Deadlifters divisional champion.

That transformation was perhaps the most significant phase of a journey that had begun less than a year before and continues to the present day. “When I joined the gym, I was 64 years old, and I felt out of control of my life,” Jackie Fendler remembers. “I was much heavier than I am now, eating poorly, and not only not in good shape, but not in any shape at all. I felt tired all of the time, and everything seemed difficult.”

During her third gym session, Fendler’s trainer suggested she enter a weight lifting contest, and, although Fendler didn’t take the proposal seriously at first, it served as a first destination for her accelerating fitness Odyssey. She says, “I worked hard, complained a lot, and finally, after about six months, really made a commitment to working out.”

That commitment, and the competition it invited, compelled Fendler and her trainer to put one exercise into the very center of their competitive cross hairs. “We chose the deadlift because it is probably the best overall exercise you can do,” she asserts. “If you have a good trainer, you can really progress.”

Finally, the object of her ten-month-long focus arrived. “I did enter that first contest, and I think I only lifted 181 pounds, but it was an enormous victory, and a great present to myself for my 65th year,” Fendler recalls. “I was, of course, very nervous at the contest, and a bit confused about what to do between lifts, but I did it!”

Some competitors might be tempted to take the medal and run, but Fendler still competes regularly, and, as she does, her network of friends and allies ever widens. “At my last meet, there were lifters ages six to the 90-year-old who lifted successfully,” the champ says. “And everyone cheers for everyone else. It’s a great atmosphere of love and support.”

That atmosphere clings to Fendler in her life away from the iron arena. “Interestingly enough, the journey has also been somewhat spiritual for me,” she reports. “I have come to like myself even more, I’ve become kinder to myself and others, and I really like what I’m doing. This has spread throughout many areas of my life, including work. I think the better you feel about yourself, the more successful you can become in all areas of your life.”

Now Fendler has nudged the crosshairs of competition from a single exercise to the very center of her existence. About putting in time at the muscle factory, The Hammer declares, “I do other things less so that I can afford it, like going to first run movies at night and eating out. I save where I can so that I can get to the gym. It’s where my money goes, and it’s worth every penny.”

For more information about Jackie’s gym, go to www.bodiesbyburgoon.com.