The Cockpit Project, Minneapolis retailer of “luxury leather & latex” goods, has new ownership. It opened in June 2001. Ownership was transferred on March 1 to a company (Minneapolis Hardware Company, LLC) of which Scott Larson is CEO. In addition, the store has a new address, 2321 Hennepin Avenue South, Minneapolis, not too far away from the previous location. 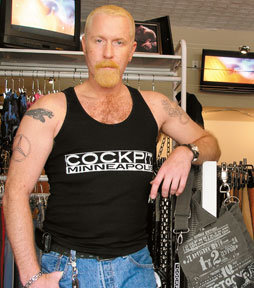 Your humble columnist always thought the previous space had a sleek European atmosphere. The new store is different: Ceilings are higher; lighting is more dramatic; music is playing (not too loudly); fixtures are taller, holding more merchandise; and several video screens are visible from anywhere.

Yet, you still know you’re in The Cockpit Project.

I recently spoke with Larson about the changes going on at the business. He told me he wanted the new space to have an approachable, relaxed, fun vibe that encourages shoppers to take their time, and feel comfortable.

Larson says, “We’ve put park benches out in front of the windows, so people can actually mingle, hang out, and enjoy the summer. There’s lots of traffic on Hennepin Avenue, lots of people going by on bikes and skateboards, getting stopped at the stoplight, and they kind of cruise. My staff loves it.”

The dressing rooms resemble jail cells. Larson relates that people have come in, and had their pictures taken in them.

The new store has a renewed and expanded merchandise mix, with more options. The selection of leather and fetishwear has been increased. Jeans, T-shirts, and other clothing items are now in stock. New labels, brands, and merchandise lines have been added, including Tom of Finland clothing (check out the zip-up-the-back jeans), OxBallsUSA, Colt, Doc Martens, and a line of underwear called Dirty Fukker. Items that aren’t in the store can be special-ordered, and received quickly.

Larson is always on the lookout for new items to add to the offerings: “There’s no limit to where the store could go, but I don’t intend to become a fashion store. So, you’re not going to see me carrying Tommy Hilfiger or Polo, unless they get into leather—unless they come up with something really unique and fun that fits the image. Then, we’ll think about it.”

The Cockpit Project is expanding its own line of signature merchandise, including T-shirts, tank tops, and vests, as well as creating its own line of watches, jewelry, accessories, and sunglasses. A new line of jocks and underwear will be manufactured in New York.

According to Larson, “The manufacturing is done by people with disabilities, namely HIV/AIDS. So, it may be a little bit more pricey, but you’ll know the money is going where it needs to go, giving an opportunity to people who need it.”

The store plans to start offering custom work in the form of a three-hour “Build Your Own Harness” program. First, choose from many different styles of straps, rings, snaps, buckles, and other hardware. Come back an hour later for a fitting and rough assembly. Then, return two hours later, and the harness will be ready to go.

Major alterations on other merchandise will be handled by Shoe-A-New, conveniently located in the same block of Hennepin Avenue.

Born and raised in Minnesota, Larson is no stranger to retailing, having worked at Dayton’s, in his words, “many, many years ago.” He has been involved with the leather scene in Houston, Atlanta, and San Francisco, working as a bartender, bar manager, and restaurant manager.
Does Larson have plans for expanding The Cockpit Project to other locations, perhaps to other cities?

Although Larson didn’t want to say too much about this, he did mention a few expansion possibilities, including Phoenix, San Diego, Chicago, and Denver.

One thing Larson has expanded right away is The Cockpit Project’s hours. It’s now open Tuesday through Saturday, 10 AM-10 PM, and Sunday, Noon-5 PM.

While the store technically is closed on Monday, it offers by-appointment shopping: After reserving a time, and paying a deposit toward your purchases, for 90 minutes, you will have the complete devotion of The Cockpit Project’s friendly and helpful staff.