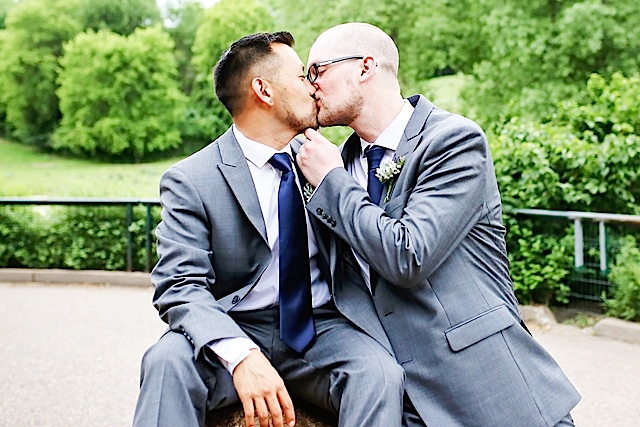 Meeting the love of your life while doing one of your favorite things is just about the most ideal situation that could happen. For Kai and Brett Chin, this was the beginning of their unique love story. The couple met in the Twin Cities Gay Men’s Chorus in February 2012, and were engaged in just a little over a year in August 2013.

Kai popped the question after consulting Brett’s cousin about the best way to go about the proposal, which he advised was to propose while doing something that they both love. “We just moved to Boston in July, and Brett signed us up to do the Freedom Trail 5K, a historical guided 5K run, which shows you Boston’s most historical sites. They said it would be a light workout, so I thought I would be okay since I’m not a runner. The whole time I had the ring in my pocket, which I bought for him in Buenos Aires, Argentina while we were sailing on Semester at Sea, and I was so nervous that I would lose the ring. We were running on the last leg of this run. I was so nervous, tired, and my knee hurt so bad, and Brett kept on insisting that we could stop. I kept on telling him no because I just wanted to get to the end of this run. We finally got to the end at the USS Constitution in the Charlestown Naval Yard where we jumped on a ferry that sails across harbor back to downtown Boston,” Kai explains.

“We finally got off the ferry and started walking around downtown by the aquarium and found a bench on the corner of India Street and John Fitzgerald Road where I sat Brett down and popped the question. He didn’t answer for a second or two, so I felt like I had to fill the silence with how much I love him. Then he put his hand on my shoulder and said, ‘Kai, of course,'” says Kai.

Brett and Kai, engaged for nearly four years, tied the knot on June 17, 2017 at the Minnesota Zoo. “We wanted something different. We wanted a wedding where our guests would have an experience and something that was kid-friendly. When we entered Discovery Bay, we realized that we wouldn’t need to decorate much. We were surrounded by over 1.1 million gallons of water, and the glow from the tanks was so beautiful and calming,” Brett says. 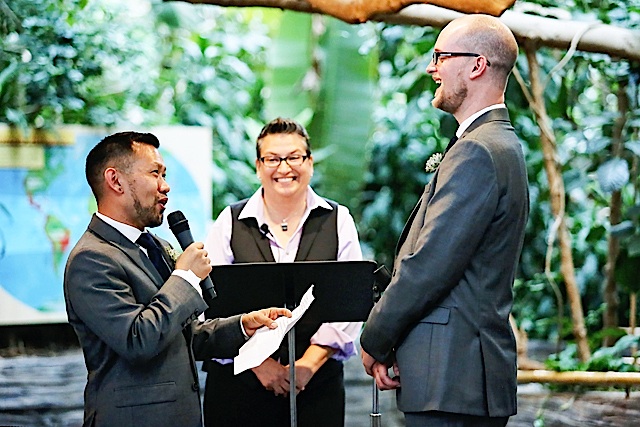 To get in the zoo spirit, Brett’s brother supplied some animal masks that he frequently wears with friends to take funny pictures. The wedding upheld the fantastic zoo environment that wowed Brett and Kai, despite them having to change their original venue plan. “We were supposed to have our ceremony outside at the Lakeside Terrace but it was raining so we ended up having our ceremony inside at the Tropics Trail, which was an amazing option. The reception was inside at Discovery Bay,” says Brett.

The couple was surrounded by beloved friends and family, and the officiant was even a friend they met at Semester at Sea, Lisa Slavid. Additionally, Brett’s younger brother, Ryan Chin, his girlfriend, Vivian Wan, Brett’s best friend and fraternity big brother, Christopher Aston, and Brett’s cousins, Michael and Kimi Van Wickle stood up for him. Kai’s brother and sister, Will Nesset and Maren Schletz, Kai’s brother-in-law, Nick Schletz, his best friends, Nathan Pendergrass and Ali Kochman, and his cousin, Kellen McGill, stood up for Kai.

With 165 guests, Brett and Kai had their work cut out for them to find food and desserts that would feed—and satisfy—every mouth at the wedding. “We really wanted an ice cream cake but the logistics for serving ice cream cake wouldn’t work for the amount of people that we had. We decided on red velvet cupcakes with sweet cream cheese filling, icing, and freshly-sliced strawberries; triple turtle devil’s food cupcakes loaded with creamy fudge, caramel drizzle, and candied pecans; and luscious lemon buttery lemon cupcakes with lemon mousse and candied lemon,” says Brett.

For dinner, Brett and Kai wanted to combine some of their favorite foods by doing one of their favorite things: making a meal out of appetizers. The guests had a wide variety of options including street tacos, macaroni and cheese, slider burgers, and french fry, salad, and fruit bars.

Choosing what to wear was another obvious choice for Kai and Brett, who both knew that they wanted to wear the same thing while incorporating the colors gray and navy blue. The couple ended up finding the perfect Calvin Klein suits from Men’s Warehouse. However, the suits weren’t the only decision to be made, and Brett suggests that couple’s in the process of wedding planning should consider all other factors, too. 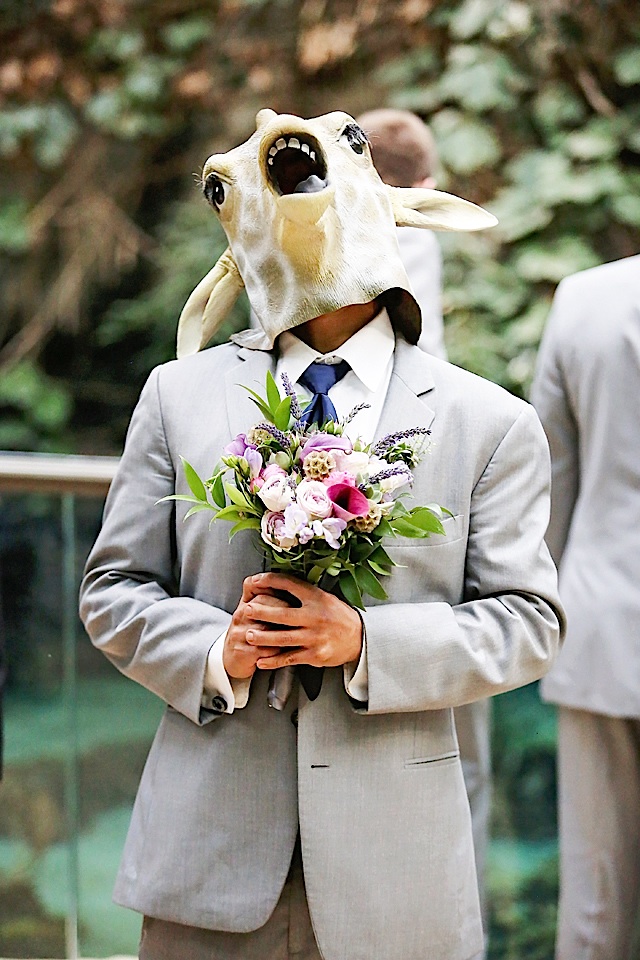 “Think about your budget: how much are you willing to spend? Also, start planning at least a year in advance, if not more. Once you have a date, book the venue right away, then book your photographer, florist, and DJ as soon as you can. If you are using David’s Bridal for any of the dresses, reserve/buy the dresses early. We must have picked up a popular style because the dresses were on backorder for almost a year. Use theknot.com for your wedding information; it’s a great way to organize everything and let your guests know all of your information for the wedding and gift registry. Lastly, be flexible and open to changing your mind,” he says.

Despite all of the details that needed to be considered and the chaos that ensued, Brett and Kai have only positive memories of the big day. “My favorite part of the wedding was the first moment that Kai and I entered the Tropics Trail to the ceremony and saw all of our family and friends’ faces. I was hit with a wave of emotion and could feel all of the love in the room. I didn’t know where to look. When I first came out, I never thought that I would find the love of my life and get married, so feeling all of this love was the greatest feeling in the world,” Brett says.

“Besides what Brett mentioned, another favorite moment was when my dad played his guitar. He sang ‘Stand By Me’ and got the rest of the guests to sing along with him. I was so touched and overwhelmed with emotions. There is a picture of me hugging Brett, crying and taking in the moment,” adds Kai.

As Brett and Kai stand by each other, the memories they’ve made—from their chorus days to their wedding day—will continue to build as they share a lifetime of happiness together. 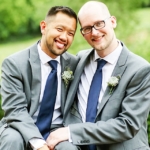 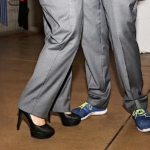 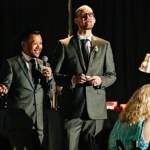 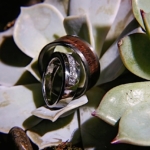 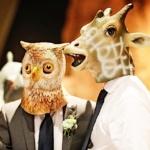 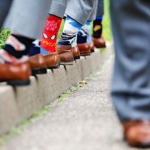 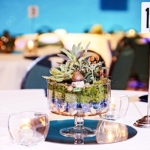 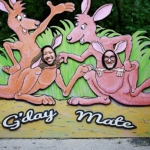 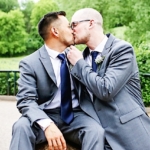 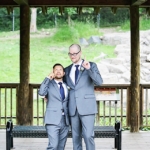 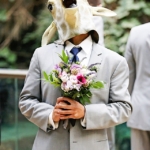 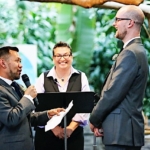 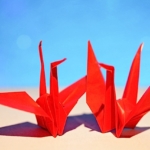 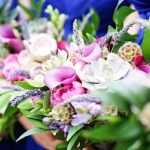